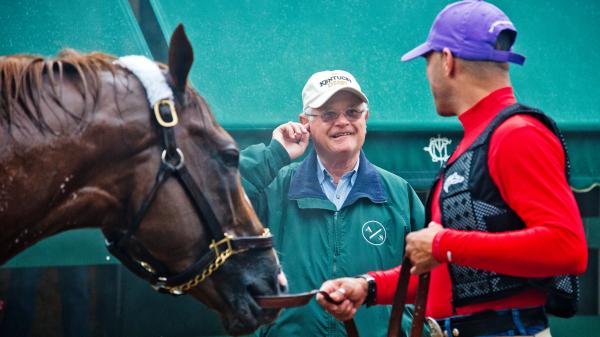 When California Chrome began collecting adoring fans, he couldn’t have had a better trainer than Art Sherman, who has announced that he will retire from training at the end of the year. Not only did Sherman do a magnificent job training the flashy chestnut to win two-thirds of the Triple Crown and a host of other major races, he always had time to talk to the horse’s fans.

The Chromies, as the fans are called, have stayed so involved, in fact, that Sherman owns a 2-year-old son of California Chrome named Chasing Alchemy in a partnership that includes some fans. The juvenile is twice unplaced.

“About eight women own about 10% of him,” said Sherman. “They’re all Chromies, and they have a lot of fun. They meet all the time. Every Saturday they’re at the barn. ‘Chrome’ is such a popular horse. I still get all kinds of letters. He’s been a people’s horse.”

Upon retirement, Sherman, 84, will probably send the horses he currently trains to his two sons, Steve, who has a stable in Northern California, and Alan, who is training in Kentucky. That will allow Art and Faye, his wife of almost 62 years, the time to travel, and Art said that he also plans to do a little bloodstock work. He added that he is feeling great, continuing to be cancer-free following a bout with bladder cancer a while back.

“I got a lot of people I know all over the country,” he said. “I’ve never been to Ruidoso [Downs]. I’ve got a friend who used to own a piece of ‘Chrome,’ and he’s been inviting me every year. That’s on my bucket list — to go for the All-American Futurity.”

Yellowstone Park is another sight that Art and Faye plan to visit. They will also most likely visit Northern California and Kentucky to see their sons and their horses. Their grown grandchildren live around the country, and Art said he and Faye now have two great-grandchildren to visit.

Sherman will always be associated with California Chrome, the son of Lucky Pulpit out of Love the Chase, by Not For Love, bred and owned by Perry Martin and Steve Coburn. As a California-bred colt out of a mare who finished her racing career running for an $8,000 claiming price, California Chrome rose from obscurity to become one of the most popular racehorses in recent times.

Steve Sherman had trained for Martin and Coburn in Northern California, and Art met them there one day in the paddock. They told him about a 2-year-old they were going to send to the races.

California Chrome did indeed become the next Kentucky Derby winner in 2014. He added that year’s Preakness Stakes, along with such other races as the 2016 Dubai World Cup Sponsored by Emirates Airline and $1 Million TVG Pacific Classic Stakes. California Chrome ultimately earned $14,752,650.

Sherman has been around many other good horses besides California Chrome, however, first as an exercise rider and jockey and then as a trainer. He rode for trainer Mesh Tenney in the 1950s and often exercised another popular California-bred  — Swaps.

Sherman traveled to Churchill Downs when Swaps won the 1955 Kentucky Derby, and when he returned with California Chrome, Sherman became the oldest trainer ever to win the race. Age 77 at the time, Sherman replaced Charlie Whittingham, who had saddled Sunday Silence to win the 1989 Derby at age 76.

Racing for Nels Erickson and trained by both Steve and Art, Ultra Blend earned $1,015,646 and sold to Katsumi Yoshida of Japan for $700,000 at The November Sale, Fasig-Tipton’s premier breeding stock sale in Lexington, in 2011.

As a trainer, Sherman’s clients have included Dr. Ed Allred, who owns Los Alamitos Race Course. That track’s next Thoroughbred meet runs from Dec. 3-12, and a celebration of Sherman’s career is being planned for some time during that meeting, possibly Dec. 10.