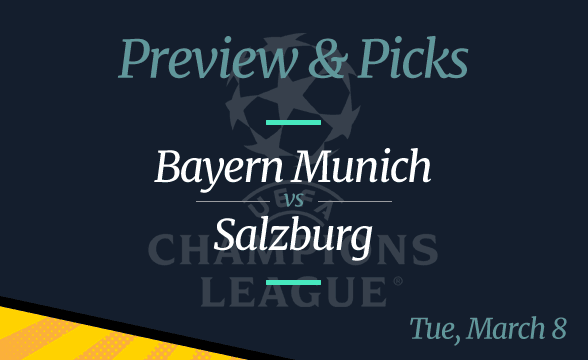 Two weeks ago, Salzburg and Bayern Munich played 1-1 in the first leg of their Champions League doubleheader. Now, it’s time for the second leg, which is played on Bayern’s turf, Allianz Arena in Munich.

At home, Bayern has lost only two games this season in all competitions, winning all the rest. Are we going to see Salzburg inflict Bayern its third loss in Munich? Online sportsbooks don’t think so. Instead, their odds suggest an easy win for the home team.

At the moment of writing, Bayern Munich is sitting at the top of the Bundesliga table with eight points more than the second-placed team (Borussia Dortmund). What this means is that the reigning champs are on the good road to securing the title stays in their possession for another year. This also means that they can switch their focus to the most prestigious soccer championship in the world – the Champions League.

Even though Bayern Munich is thought of as one of the top favorites for the title, this team didn’t do great in its first UCL game in 2022. The Bavarians failed to beat Salzburg two weeks ago. It was 1-1 after the final whistle, although Bayern was the better team.

The visitors had the ball in their possession for almost two-thirds of the time, making twice as many goal attempts as the home team. They failed in Austria, but in Germany, Bayern players are tipped to succeed.

Can Salzburg Fight Back?

Red Bull Salzburg is a team whose business model is to develop young players. Probably the best example of a global soccer star who started his professional journey in this team is Erling Haaland, the man who’s now seen as the world’s second-most expensive player.

Even in 2022, Salzburg has plenty of youngsters on its roster. It’s likely some of them will become stars in the future. However, at the moment, they just aren’t as good as those playing for Bayern. So, how did they manage to snap a point off Bayern two weeks ago?

They did it by attacking Bayern with all of their weapons. Plus, with the help of their fans from the stands of their sold-out stadium, their morale was super-high in that game. The same probably isn’t going to be the case in Munich, tho.

2022-03-06
Previous Post: “We see great potential in Colombia’s market on the iGaming front due to the country’s maturity in that segment”
Next Post: PointsBet Partners with NBC Sports for Major Betting Telecast