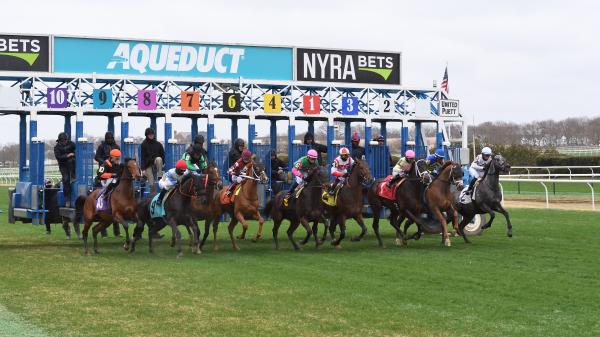 The $200,000, Grade 2 Red Smith Stakes drew a field of 10 running 1 3/8 miles on the Aqueduct turf course. Although a Grade 2 race, there are few in the field proven at the level and/or distance. One of those is Tide of the Sea, who on the Grade 2 W. L. McKnight Stakes this past January and, more recently, won the Japan Turf Cup Stakes in October at a similar distance. Another who is proven at the level is Channel Cat, who leads the field in career earnings at $1.4 million, including when victorious in the Grade 1 Man o’ War Stakes at this distance on grass in May. However, Channel Cat has lost three races since then and the Man o’ War was his only win this year (from six starts), with his last win before that coming in July 2019.

Soldier Rising may fit with these based on his runner-up effort to eventual Longines Breeders’ Cup Turf winner Yibir in the Jockey Club Derby Invitational in September. However, his most recent effort was a disappointing fifth of 11 when favored in the Grade 2 Hill Prince Stakes last month. Serve the King enters the Red Smith in excellent recent form, having won the John’s Call Stakes one before last, followed by a second-place finish in the Grade 1 Joe Hirsch Turf Classic last month. Shamrocket won the Point of Entry Stakes at 1 1/2 miles just one month ago and might be up to the task moving into graded stakes company. Price Talk beat Shamrocket prior to the Point of Entry; he is another untried at the distance but has won two in a row. No Word was competitive at the level when second this past summer in the Grade 2 Bernard Baruch Handicap, but that was at a much shorter distance and he has never raced farther than 1 1/4 miles. Another who has never competed at the distance is Sanctuary City, but he did finish second in the Mohawk Stakes in his most recent start. Corelli won the Grade 3 Singspiel Stakes at 1 1/4 miles on turf in August and may fit at this Grade 2 level. He also may enjoy the longer distance as he missed by a head in a 1 1/2-mile race in England before he was sent to the U.S. last year. Value Engineering has never raced in a stakes but enters the Red Smith off a win, and the one time he ran at this 1 3/8-mile trip he missed winning by just a head on the wire.

Given there are knocks with the horses most likely to be favored by bettors, such as Soldier Rising, who has yet to win in three U.S. starts, particularly when as the 8-5 favorite last month in the Hill Prince Stakes, and with Tide of the Sea, who won the Japan Turf Cup takes in October but was beaten as the 7-5 favorite last month in the Point of Entry Stakes, I’ll go with Price Talk to win. He is the second most lightly raced horse in the field, having run just eight times, but he’s won four of those eight races, including two in a row. He won the first three races of his career, including when breaking his maiden at first asking, then breaking his maiden again after being disqualified from the first win.

Last November, in only the fourth start of his career, Price Talk finished third in the Gio Ponti Stakes on the Aqueduct turf, but when returning this spring did not run well in two races thereafter. Dropped into a claiming race in August, Price Talk won with a career-best 108 Equibase Speed Figure, which was a stakes quality effort, as compared with the 109 figure Shamrocket earned winning the Point of Entry Stakes last month, the 106 figure Corelli earned winning the Singspiel Stakes in August, and the 105 figure Serve the King earned when second in the Joe Hirsch Turf Classic last month. Price Talk then bettered himself with a 113 figure winning near the end of September. It turned out to a productive race as Shamrocket came out of it to win the Point of Entry. That 113 figure is tied for the best earned by any horse in this field in 2021 with the figure Channel Cat earned winning the Man o’ War Stakes in May. As such, just repeating it is good enough to win the Red Smith, but I feel he may even better that effort and figure as this will be his third start off a layoff.

Serve the King has done very little wrong in 10 career starts, like Price Talk having won four times in his career. After winning the John’s Call Stakes at the longer distance of 1 5/8 miles with a career-best 107 figure, Serve the King finished well from sixth to second in the tougher Joe Hirsch Turf Classic with a similar 105 figure effort. Irad Ortiz Jr. was aboard for both of the horse’s “A” efforts and rides back in the Red Smith, giving Serve the King a strong chance for another competitive effort good enough to win.

Shamrocket has more second-place finishes (6) in his 20 race career than wins (4), and even more third-place finishes (7). Still, his win last month in the Point of Entry Stakes at 1 1/2 miles earned a career-best 109 figure, which is competitive with the best in this field. His jockey, Javier Castellano, was aboard for that win and for the colt’s last win before that in June. That is a positive sign as Castellano rode Value Engineering to victory last month as well as Price Talk in his two most recent wins.