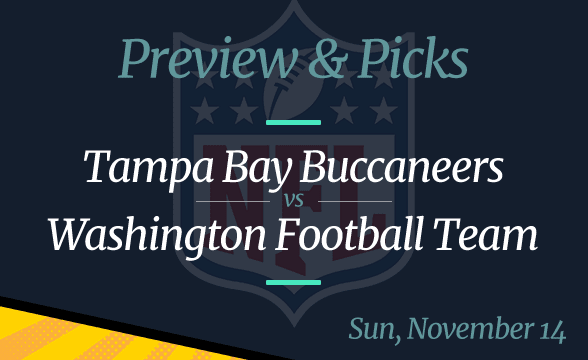 The Washington Football Team (WFT) lost the previous four games, which made their record 2-6. The good news for the WFT is that they’ve had a bye week to rest and prepare for the Week 10 clash with the Tampa Bay Buccaneers.

The bad news is that the same was the case with the Bucs, who suffered their second loss of the season on Halloween. As a result, their record is 6-2 ahead of Week 10, which is only slightly better than their divisional rivals, the New Orleans Saints. If the Super Bowl LV winners want to stay at the top of the NFC South, they need to start winning again.

All odds are per FanDuel as of November 12.

Can History Repeat Itself for the Bucs?

In the 2020 season, the Buccaneers went undefeated after returning from their bye week. Can something similar happen a year later?

They’re coming off a bye in week 9 to take on the WFT, one of the worst teams in the division. Sure, Washington might not have a horrible roster, but this team’s form has been horrendous lately. That’s something that the Bucs will want to take advantage of.

Their schedule doesn’t look that ugly, especially in the next couple of weeks. Actually, the toughest opponent they’ll take on before the end of the regular season is the Buffalo Bills. However, the clash with the Bills will take place in Florida.

The Buccaneers surely have the quality to win all those games. However, for that to happen, they need to stay focused. This goes especially for their defense that’s been conceding 22.9 points on average through the season.

In their most recent game, we saw them allowing 36 points against the Saints, which was their worst defensive display of the season.

The good news is that the Bucs’ offense seems to keep getting better and better. Their QB Tom Brady, for example, made four touchdown passes in that game, helping his team score 27 points.

Not too bad, but the Bucs can do even better. Evidence is that their average on the season is 32.55 points per game – the best average in the entire NFL.

Can WFT Improve their Defense?

Washington has the fourth-worst defense in the NFL, with 28.4 points conceded per game. They conceded under 20 in only one game this season. On the bright side, the game in question is the Week 8 game against the Denver Broncos.

That was the last game the WFT played before the bye week. We saw them losing 17-10 to the Broncos, which may not look like a disaster. However, one needs to keep in mind that the Broncos have been pretty anemic in the offense this season, with 20.8 points scored on average. This makes them the 22nd-best offense in the league.

When playing against offensive-minded teams, the WFT defense usually doesn’t do great. In 2021, we saw them conceding 43 points against the Bills, 31 against the Saints, and 24 against the Packers. It wouldn’t be a big surprise if they conceded as many (or even more) in the Week 10 game.

Picks: Tampa Bay Buccaneers to win and cover the spread; over to hit.