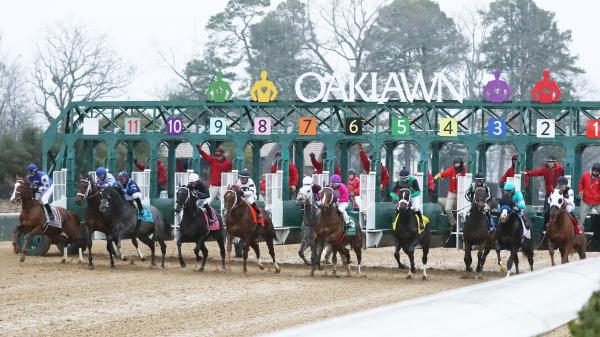 Last weekend, Un Ojo upset the Rebel Stakes at Oaklawn Park and picked up 50 qualifying points for the Kentucky Derby. This Saturday, four qualifying points preps are on tap: the Gotham Stakes at Aqueduct; the Fasig-Tipton Fountain of Youth Stakes at Gulfstream Park; the San Felipe Stakes at Santa Anita Park; and the John Battaglia Memorial Stakes at Turfway Park.

Coming off a slow-start third in the Risen Star Stakes Presented by Lamarque Ford at Fair Grounds, he clings to the top spot in the Dozen rankings. Zandon likely makes his next start in the April 9 Toyota Blue Grass Stakes at Keeneland, trainer Chad Brown told Daily Racing Form. The Brown-trained Good Magic won the 2018 Blue Grass before his runner-up finish to Justify in the 2018 Kentucky Derby.

Like Zandon, he is a move-forward candidate exiting the Risen Star, in which he was second in his first start of the year. He went 2-for-2 as a juvenile, winning at Keeneland and then taking the Kentucky Jockey Club Stakes at Churchill Downs, where he defeated Classic Causeway, White Abarrio, and Call Me Midnight – all graded stakes winners on the Derby trail in 2022.

At this early juncture, he seems the probable favorite for the March 26 Twinspires.com Louisiana Derby at Fair Grounds. Besides his frontrunning Risen Star triumph, he just missed in the Lecomte Stakes and rolled in the Gun Runner Stakes there. Hall of Fame trainer Steve Asmussen is prepping him similarly to Gun Runner, who also took the Louisiana road to Louisville before his third-place finish in the 2016 Derby.

Having already announced his colt would skip the Fasig-Tipton Fountain of Youth Stakes to await the April 2 Curlin Florida Derby at Gulfstream, trainer Saffie Joseph Jr. gave this colt his first breeze since winning the Feb. 5 Holy Bull Stakes with three furlongs in :36.22 at Gulfstream Park Feb. 27. Making his Holy Bull win all the more striking is the fact that he won it despite interrupted training leading up to the race.

After his fast-finishing third in the Holy Bull, he is entered in the Fountain of Youth, but not a certainty to start. He drew the far outside post, and his connections feel he is better with more ground and over full stretch (1 1/16 races at Gulfstream end at the sixteenth pole). On the flip side, there appears to be a significant amount of pace signed on, which would suit the Remsen Stakes winner’s closing style.

He recorded his fastest breeze of the year Feb. 26 with a half-mile in :58.67, but in that joint workout with unraced stablemate Creative Minister, he finished about a neck behind while coming under more pressure from his rider. Not having raced this year and with just two five-furlong moves in 2022, Rattle N Roll enters the Fountain of Youth at Gulfstream Park potentially behind his rivals in terms of fitness. He dips this week in the rankings in light of these factors but this colt still has the talent to be an impact player this spring.

After winning the Feb. 12 Sam F. Davis Stakes to kick off his 3-year-old season, he has another date at Tampa Bay Downs in the March 12 Lambholm South Tampa Bay Derby. He figures to be a force there following a Sam F. Davis triumph when he withstood pace pressure to kick away from the opposition. He has never been off the board in four starts, including twice in graded company as a juvenile when racing behind Rattle N Roll and Smile Happy.

After whipping maidens and entry-level allowance optional claiming foes, he matches up against some of the division’s best this weekend in the Fountain of Youth. Besides him, four other Derby Dozen horses are in the lineup. He was able to control an easy pace in winning his first race around two turns at Tampa Bay Downs, but another free early pass appears improbable with other speed in the Fountain of Youth. Regardless, this is a colt with considerable promise.

Eager to see what he can do with a clean break in the Fountain of Youth. In the Holy Bull, he was forced to play catchup after starting slowly and still rallied into contention, outlasting Mo Donegal for the place behind clear-cut winner White Abarrio. He picks up Jose Ortiz for Saturday’s Fountain of Youth, and drawn in post 2, will likely be prominent early with a sharp start. This 3-year-old didn’t switch leads in the Holy Bull perhaps from fatigue after launching a second-turn bid to catch up.

Though he is not unbeaten like Emmanuel, he also races in the Fountain of Youth after clearing the first-level allowance optional claiming hurdle. Racing a one-turn mile at Gulfstream Feb. 4, he was a bit slow into stride, advanced down the backstretch, and then overpowered a field that included a couple of highly regarded Todd Pletcher trainees. Drawn in post 4 in the Fountain of Youth, he looks poised to get a stalking trip behind the speed in his first stakes and two-turn try.

Though he is only a twice-raced maiden winner, he has already run a graded-quality time, completing a mile Feb. 12 in 1:35.55 at Gulfstream and earning a 103 Equibase Speed Rating. To put that in perspective, the highest ESF of 2022 for a 3-year-old is a 107 by Messier in taking the Robert B. Lewis Stakes by 15 lengths (Messier is not ranked due to Churchill Downs Inc.’s suspension of trainer Bob Baffert). If Charge It qualifies for the Derby, it may come down to one stakes attempt in late March or early April.

Like White Abarrio, after winning a stakes race this year his connections chose to await a 170-point qualifying race on the Road to the Kentucky Derby next, though his intended start is the Louisiana Derby, not the Florida Derby. Call Me Midnight should be fresh for the race and potentially for the Triple Crown. Having defeated Epicenter in taking the Jan. 22 Lecomte Stakes earlier this spring (albeit with a favorable trip), he edges last week’s Rebel Stakes participants to claim the final spot at the bottom of the Dozen.