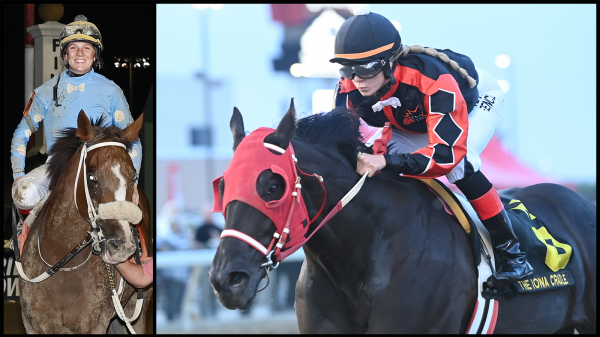 Kylee Jordan expects to be nervous when she enters the paddock for the $1 million Breeders’ Cup Juvenile Turf Sprint on Friday at Keeneland Race Course. The butterflies are sure to be flying.

She is 20 years old. She hails from a small town in Fredericksburg, Iowa. She was part of a graduating class at Sumner-Fredericksburg High School that numbered approximately 50. She has been a jockey for less than a year. She suddenly finds herself on racing’s grand international stage, competing against some of the world’s greatest riders.

“I’m sure that coming up to the race I’ll be a little nervous,” Jordan said. “But usually I settle down as soon as I get on the horse.”

It helps that Iowa-based trainer Tim Martin will be giving her a leg up on undefeated Iowa-bred Tyler’s Tribe,  a force through his first five starts by a combined margin of 59 ¾ lengths with all of that success coming in his home state at Prairie Meadows Racetrack and Casino.

There is every reason to believe the moment will not be too big for Jordan, even at pressure-packed Keeneland. Whatever her location, she has always felt at home on a horse.

“Once she gets the horse on the track, I would anticipate her taking a deep breath and she’ll be fine,” said her mother, Christa. “It’s a big stage, but I think she’s going to be all right.”

Jordan grew up around horses. Her mother recalls sitting on a horse with Jordan when the infant was 11 days old. Her father, Todd, trains a small stable of horses in what is very much a family operation. According to Equibase, his top horse was Run Some Koppy’s, a mare that earned $150,167.

Jordan did not grow up dreaming of becoming a jockey. She is not driven by the prospect of fame or fortune. Christa said all of the recent attention has been uncomfortable for her daughter. “She’s always just wanted to be on a horse,” her mother said.

The 5-4, 118-pound Jordan told her parents last March that she thought she would take a shot at a riding career.

“I decided to try it out, kind of,” she said. “I get along with horses pretty well and I was the right size.”

She made her riding debut on May 3, 2021 at Will Rogers Downs. The Claremore, Okla., track became the site of her first riding title. She recently topped the standings at Prairie Meadows with 81 wins and $2,087,351 in purses.

“She’s got a gift for this. She’s just a natural,” Martin said. “She connects with everything she gets on.”

The baddest actors do not intimidate her. She always finds a way.

“It’s remarkable. It makes me speechless,” her mother said. “She’s always had this natural ability to just calm a horse down if they’re anxious. She’s very, very relaxed on horses. If they’re acting up in the post parade, she’s just chill.”

Jordan has been a perfect fit for Tyler’s Tribe, a gelded son of Sharp Azteca who has had his picture taken so frequently that he often stops to pose whenever he hears a camera. No rival has come within 6 ½ lengths of them, the winning margin in the Oct. 1 Iowa Cradle Stakes in their most recent start.

“He knows what he’s doing and I try to stay out of his way,” the young rider said. “I kind of let him do his thing. He seems to settle down best that way.”

Martin fielded a number of calls from agents seeking the Breeders’ Cup mount for big-name clients. He politely turned down each of them.

“I didn’t want to go that route,” he said. “She’s a good rider. She hasn’t done anything wrong. We’re really comfortable with her. No complaints.”

Jordan got a taste of what it means to ride against the best of the best last winter at Oaklawn Park. “They can be intimidating at times and they will ride a lot more aggressively,” she noted. “I’ve gotten along pretty well.”

She undoubtedly faces the stiffest challenge of her fledgling career in the Juvenile Turf Sprint. For one thing, Tyler’s Tribe has always competed on dirt. And the early 15-1 longshot has never faced anything close to the caliber of competition that awaits him on Friday. He has always broken sharply and had things his way. He has never experienced the intense pressure that will surely be applied to him on Future Stars Friday.

“I’m excited to see how he’s going to take on a bit tougher competition,” Jordan said. “He’s got a big heart and I think he’s got a lot of try in him.”

Whatever the outcome, Jordan will continue to refine her skills by spending another winter at Oaklawn. What else might the future hold for such a precocious and promising talent?

“That’s a hard question for me,” she said, “just because I kind of go with the flow.”

2022-11-03
Previous Post: How to Make Sense of the First CFP Rankings
Next Post: Powerball Jackpot Grows To $1.2 Billion