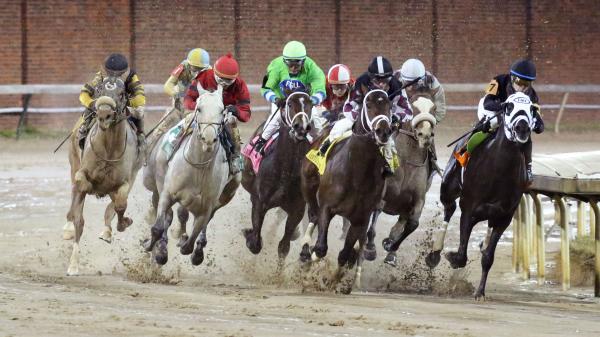 Can the Favorite be Beaten in Kentucky Jockey Club?

The $400,000 Grade 2 Kentucky Jockey Club Stakes showcases a full field of 14 2-year-olds on the Road to the Kentucky Derby Presented by Woodford Reserve. Eight of the 14 won their most recent starts, including Howling Time, who was victorious in the Street Sense Stakes at 1 1/16 miles at Churchill Downs last month. He’s trained by Dale Romans, who also saddles Street Sense third place finisher Red Knobs, who had finished third in the Grade 3 Iroquois Stakes prior to that. Classic Causeway finished third in the Grade 1 Claiborne Breeders’ Futurity early in October, also at the distance of this race, and could improve. Tiz the Bomb started his career on dirt this spring and early this summer then transitioned to turf and won two stakes including the Grade 2 Castle & Key Bourbon Stakes before a 12th-to-second rallying finish in the Grade 1 Breeders’ Cup Juvenile Turf at Del Mar three weeks ago.

Of some of the other recent winners, Texas Red Hot won a one-turn mile race versus allowance company at Churchill Downs, and Call Me Midnight won a maiden race over the track at the same distance. Smile Happy and Vivar both won at this distance in their most recent starts, the latter in an allowance race, with both taking a significant jump up in class. Mannix and White Abarrio both ship up from Florida trying to earn Road to the Derby points. They both won their most recent races at Gulfstream Park impressively. Ben Diesel, who is a full brother to multiple graded stakes winner Will’s Secret, won a maiden race at the distance over the track in his only start and is another talented colt stepping up in class considerably. Guntown, Rich Strike and Ready Pursuit round out the field.

Tiz the Bomb sticks out on class and speed figures in this year’s Kentucky Jockey Club Stakes. He earned a field-high 107 Equibase Speed Figure earned when closing sensationally for second in the Breeders’ Cup Juvenile Turf three weeks ago. Lagging back in 12th after three quarters of a mile of the one mile race had been run, Tiz the Bomb passed 11 horses in the last quarter mile including seven in the last eighth of a mile to finish second in an unusual race in which winner Modern Games ran for purse money only. Prior to that, Tiz the Bomb won three races in a row including two stakes races. His only dirt route came before the stakes where in July Tiz the Bomb defeated the field by 14 lengths.

Since returning to Kentucky from California, Tiz the Bomb put in a strong workout on the Churchill Downs dirt main track which was the fourth best of 59 on the day for five-eighths of a mile, demonstrating he is holding top form. It must also be noted that in 2015 Airoforce finished second in the Breeders’ Cup Juvenile Turf before his victory in the Kentucky Jockey Club Stakes. That provides evidence that moving from turf to dirt while dropping from a grade 1 to grade 2 stakes may be the ticket for success in this race.

Howling Time is another with history on his side. Winner of his maiden race in September, Howling Time stepped up in class last month to win the Street Sense Stakes over the track and at the distance of the Kentucky Jockey Club Stakes. The Street Sense was the same race the 2016 Kentucky Jockey Club winner McCraken ran in prior to winning, and in 2019 Silver Prospector finished third in the Street Sense before capturing this race. Although the 92 figure earned winning the Street Sense is much lower than the 107 figure Tiz the Bomb earned in his most recent race, it is on par with the 90 and 89 figures Tiz the Bomb earned winning two stakes races so if the likely favorite regresses to his previous form and Howling Time continues to run the same race, or improves, he has every right to win this race.

White Abarrio ships up from Gulfstream Park off a strong four length win in the second start of his career, following a six length win in his debut in September. His 94 and 89 figure efforts are pretty strong and one win came while leading from start to finish while the other came from off the pace so this colt’s versatility could be an asset. Since White Abarrio is running in a stakes race for the first time, I used Race Lens to check the records of other foals of his sire, Race Day, who has just three crops of horses racing to date. Among that small group, only eight horses have run in dirt route stakes races, but four of those eight have won stakes similar to this race. White Abarrio has a chance to succeed in this field.

2021-11-26
Previous Post: What Determines the Parameters for Wagering?
Next Post: Czech Republic COVID State of Emergency but WSOPE Continues