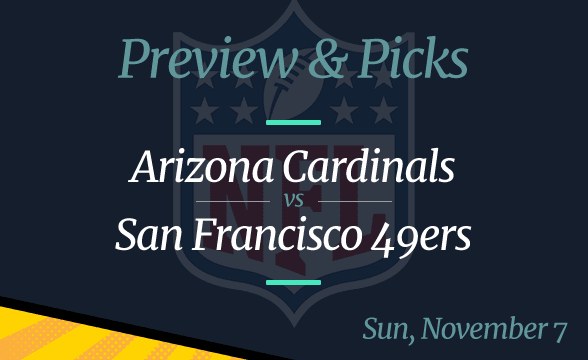 The undefeated run ended for the Arizona Cardinals in Week 8 when they lost to the Green Bay Packers 27-24 at home. The loss didn’t hurt them as much as the injury their key player picked up late in that game. Their quarterback, Kyler Murray, the top MVP candidate, injured his right ankle in that game.

For that reason, he had to skip Arizona’s practice on Wednesday, and is still unclear whether he’ll play on Sunday. This could mean trouble for the Cards who are traveling to California to take on the San Francisco 49ers.

Is this something the Niners can take advantage of? Some online sportsbooks like WynnBet seem to think so, giving the role of the favorite to San Francisco.

All odds are per WynnBet as of November 5.

Cardinals Worried About Their Offense

Kyler Murray will probably feature in Week 9, as the man himself hinted on Wednesday when asked about missing the practice. The quarterback said he’s ‘good to go’ against the Niners, although the final decision is left to his team’s medical team.

Even if he ends up playing, he might not be at his top fitness level. Further, the Cards will probably want to ensure Murray doesn’t get hurt again, meaning that we will probably see him focusing on the passing game instead of carrying the ball with him.

The trouble is that Murray will not have his favorite targets to throw the ball to. Arizona’s starting receiver DeAndre Hopkins is struggling with a hamstring injury, which will probably keep him sidelined in Week 9.

On top of that, A.J. Green will also miss the game, the reason being that he tested positive for COVID-19. The same is the reason why tight end Demetrius Harris will miss the game in San Francisco.

Cardinals vs 49ers is a divisional rivalry, with two games played every season. In 2021, the two have already met once. It happened in October when the game was played in Arizona. The home team won 17-10, which remains their least impressive offensive performance of the season.

In all other games the Cardinals played in 2021, they scored over 20 points. In fact, in six games this season, we saw them scoring over 30 points.

Obviously, the Niners’ offense does not suit them well. This could be a big problem for Arizona if San Francisco’s offense does better than the last time.

The chances are that it will. The #1 reason for that is that in the first Cardinals vs 49ers game, the Niners’ Q.B. was rookie Trey Lance. In this game, the man in charge of signal-calling is going to be Jimmy Garoppolo.

The reason why the Cardinals need to fear Jimmy G is that he’s coming off a wonderful performance in Week 8 against the Chicago Bears, which saw him scoring two rushing touchdowns. Apart from rushing, the guy is also famous for being a fantastic thrower of the ball. Evidence of this is that Garoppolo ranks third in the NFL in terms of long passes, with 83 to his name.

Knowing all this, it’s only logical to think of San Francisco as the favorite in this game. The Niners should win, covering the spread along the way.

Pick: San Francisco 49ers to win; the under should hit in this game.