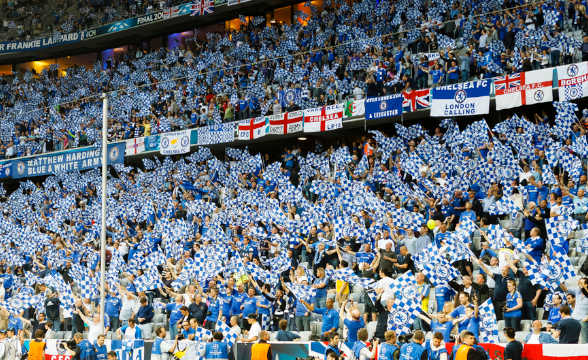 Chelsea vs Real Madrid is the clash between the reigning Champions League champion and the team that’s won this competition more than anyone else. This year, the two meet in the UCL quarterfinal with the first leg happening on Wednesday, April 6.

Everyone seems to think their first duel is going to be a real barnburner, with oddsmakers giving a slight advantage to the hosts. They did it the last time these two met – it was May last year when we saw Chelsea beat Real Madrid 2-0 at Stamford Bridge.

Things Not Looking Great for Chelsea

Chelsea lost to Brentford last Saturday 4-1 in the Premier League despite entering the game as a -250 favorite. It was only the fourth defeat for the Blues in the Prem this season, meaning that it won’t affect their standings much.

However, the loss could be a sign of a bigger problem. According to recent reports, things aren’t great in Chelsea’s locker room. Romelu Lukaku, who was supposed to be a new Didier Drogba, seems to be dissatisfied with his life at Stamford Bridge. The powerful striker is reportedly looking to move to Paris in the next transfer window.

Further, it seems that something similar is on the mind of another Chelsea striker, Timo Werner. The German international admitted that he feels more comfortable playing in his homeland Germany.

With less than two months until the end of La Liga season, Real Madrid is close to clinching the Spanish title. Los Blancos have 12 points more than Barcelona, the team sitting in the #2 position. Plus, Real’s schedule in the Spanish league isn’t that tough, with their next opponent being Getafe, a team from near the relegation zone.

What this means is that Real Madrid players can focus more on the Champions League. This goes especially for Wednesday’s game, which is played in England. If Los Blancos get a good result in London, their chance of advancing to the next stage of the competition will skyrocket.

The reason is that in the second leg, they’re the ones to welcome Chelsea. And on their turf, Los Blancos are very tough to beat.

Not losing on Wednesday is Real Madrid’s priority. This team seems to have the manpower to get a draw, but can they beat Chelsea?

With players like Benzema, Modric, and Kroos, Real Madrid has the experience to do well in such an important game as the one played this Wednesday. Add to that the fact that they’re led by Carlo Ancelotti, one of the most decorated coaches in the world and you’ll realize that backing Real Madrid wouldn’t be a crazy thing to do.