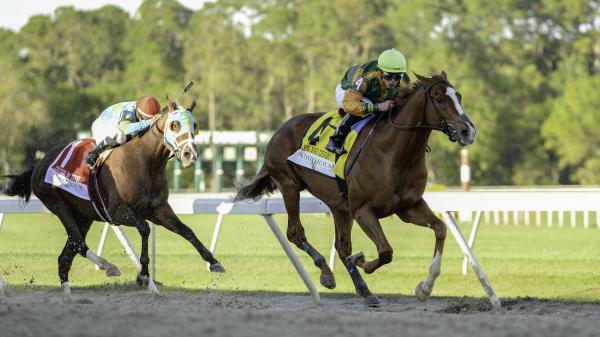 Classic Causeway led at the start and to the finish of the $350,000 Grade 2 Lambholm South Tampa Bay Derby March 12 at Tampa Bay Downs, and now he tops something else—the Kentucky Derby Leaderboard.

Earning 50 qualifying points with his victory in the Road to the Kentucky qualifier to go along with 16 points, he advanced his total to 66, moving past Epicenter with 64. The points, which Churchill Downs officials use as a preference system and to publicize their race, assure him of a starting berth in the 1 1/4-mile classic May 7.

Taking command Saturday immediately after a quick break under Irad Ortiz Jr., Classic Causeway always looked like a winner in the 1 1/16-mile contest, hitting the wire 2 1/2 lengths in front of a pace-chasing Grantham. The latter outlasted Shipsational by a neck for the place with Golden Glider another neck back in fourth.

The second through fourth finishers in the Tampa Bay Derby earned qualifying points on a 20-10-5 basis.

Classic Causeway’s victory mirrored his earlier stakes win at Tampa in the Feb. 12 Grade 3 Sam F. Davis Stakes when he similarly outbroke the opposition and took charge on his way to a 3 3/4-length victory.

Classic Causeway became just the third horse since the turn of the century to take both races, joining Burning Roma (2001) and Destin (2016). Destin would later make an impact in the 2016 Triple Crown, finishing sixth in the Grade 1 Kentucky Derby Presented by Yum! Brands and second, beaten a nose by Creator, in the Grade 1 Belmont Stakes Presented by NYRA Bets.

He won despite not appearing to fully extend himself in the stretch. He drifted out a bit at the top of the lane.

“Getting close to the wire, he was looking around a little bit, but I felt I had a lot more horse,” said Ortiz. “He’s acting like he can carry his speed more. These last couple of races he’s been acting after the wire like he still has more left. I don’t want to jinx it, but I think there is something more there.”

The connections of the second- and third-place runners were also happy with their colt’s performances, with Luis Saez on Grantham commenting that he needed to start riding his mount with a half-mile remaining but “he kept going. He kept trying.”

His trainer, Mike Maker, said he didn’t see why “we won’t go on from here and move forward. I think a very good horse beat us today so I have no complaints.”

Eddie Barker, trainer of third-place finisher Shipsational, noted his trainee had a wide trip in attempting to rally from fifth.

“He lost a little too much ground, but I think he ran as good as he can run,” he said. “We’ll be alright. We’ll come back and get another race, and we’ll get the points. I’m not disappointed by the way he ran. He’s a nice colt who tries hard all the time.”

Shipsational now has a total of 14 points, while Grantham has 21 and Golden Glider 5.

Disappointing in Saturday’s race was graded winner Major General, the 4-1 second favorite who ran last of 10 in his first start at 3. He stumbled at the start and came under early urging in an unsuccessful bid to keep pace with the leaders.

With the Tampa Bay Derby run in March, its participants have an opportunity to secure more Derby points in the final round of Derby preps which continue through mid-April.

Classic Causeway is the first stakes winner produced from the Thunder Gulch mare Private World, who won the Moccasin Stakes and Anoakia Stakes as a juvenile in Southern California in 2005. Eight of her 10 foals have raced, with five winners. Her two unraced foals are a Lookin At Lucky 2-year-old filly and a Justify yearling colt. She was bred back to Justify for 2022.

Paco Lopez rode the David Fisher-trained winner, a son of Curlin who raced a mile in 1:39.80 when the track appeared to contain more moisture after morning rainfall.