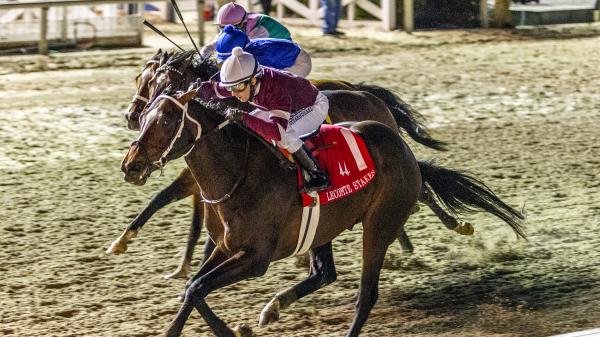 The Grade 3, $200,000 Lecomte Stakes kicks off the Fair Grounds Road to the Kentucky Derby Presented by Woodford Reserve, which will also include the Risen Star Stakes and the Twinspires.com Louisiana Derby. Eight colts signed up to run, including Grade 2 Kentucky Jockey Club Stakes winner Instant Coffee. The other Lecomte entrant proven at the level is Two Phil’s, who was victorious in the Grade 3 Street Sense Stakes last October, but who has not run in nearly three months since that race. Four of the others enter off strong wins in their most recent starts but at lower levels. That group is led by Confidence Game, who won an allowance race for his second career victory, as did Bromley, who is undefeated in two starts. Tapit’s Conquest was the most impressive among the quartet when winning by three and one-half lengths. The last of the group is Itzos, intriguing for another reason as he is a half-brother to champion Rachel Alexandra and cost $1.4 million at auction in 2021. Echo Again and Denington both exit third place efforts in good company, in the Springboard Mile Stakes and Smarty Jones Stakes, respectively.

Confidence Game ran the best race of his career in his most recent start at the end of November and at the distance of the Lecomte when leading the field from start to finish in a highly rated allowance race. The 94 Equibase Speed Figure he earned is the second highest behind the 96 Echo Again earned when third in the Springboard Mile Stakes and is likely to be improved upon, perhaps significantly, based on a pattern of physical and mental improvement started in September. In his first route race that month, Confidence Game earned a 67 figure when fifth of nine in the Iroquois Stakes, improving to 73 when second then to 94. Although both wins have come when leading from start to finish, Confidence Game can stalk likely pacesetters Echo Again and Itzos (who is stretching out from sprints), just as he did in his October 12 race when rallying from fifth to second. Jockey James Graham, who rode Confidence Game to that rallying runner-up effort, gets back on and Graham has won for trainer Keith Desormeaux at Fair Grounds one-third of the time over the past couple of years, including in the 2022 Lecomte with Call Me Midnight at 28 to 1 odds. Those are reasons enough to give Confidence Game top billing in this year’s race.

Tapit’s Conquest is one of two from the very strong barn of trainer Brad Cox, the other being Instant Coffee. Tapit’s Conquest is likely go to post in the Lecomte at higher odds than his stablemate, who just won the Kentucky Jockey Club Stakes as compared to the allowance level race Tapit’s Conquest recently won. Just the same, Tapit’s Conquest has as much chance to win as Instant Coffee because his only try around two turns was a tremendous effort in which he drew off to win by three and one-half lengths after stalking in third in the early stages. After earning a 79 figure in his debut at seven furlongs last September, Tapit’s Conquest improved to an 84 figure and now as a much more mature three year old could improve markedly. Trainer Cox is not only on fire at the Fair Grounds meeting, having won with 15 of 33 (46%) starters to date, he has a tremendous record with horses returning from layoffs in route races. A Race Lens query reveals Cox has won with 27% of his starters coming back from layoffs of two to six months in routes over the last five years. Better still, another Race Lens query shows us with three year olds in dirt route stakes coming back from layoffs of three to six months, Cox has won four of seven. Jockey Florent Geroux, the number one winning jockey for the barn, rode Tapit’s Conquest to victory in his last race and rides back, and the colt worked in company with his stablemate Instant Coffee so it is very clear he’s in great shape coming into this race.

Instant Coffee won his debut in impressive fashion last summer at Saratoga when running seven furlongs, which is a difficult distance to win at first asking. Moved way up in class the following month he ran in the Claiborne Breeders’ Futurity at Keeneland with the hope of proving ready to run in the FanDuel Breeders’ Cup Juvenile Presented by Thorougbred Aftercare Alliance one month later. In spite of rallying from 10th to fourth and earning a 94 figure it was not good enough for trainer Brad Cox to run him in the Juvenile, so he rested the colt until the Kentucky Jockey Club Stakes in November, where Instant Coffee prevailed in a field of nine as the favorite. Although regressing to a 79 figure, Instant Coffee proved to have a big burst of speed mid-race when going from fifth to third on the turn and into the stretch before drawing off by a length and one-quarter. Being another top runner who could benefit from a contested early pace, Instant Coffee has a more than decent chance to win his second graded stakes in a row and put himself on the short list of early Kentucky Derby favorites

2023-01-19
Previous Post: Alleged Poker Cheater Resurfaces at Tourney in Mississippi While Still Owing Money
Next Post: Bally’s Planning To Cut Up To 15% of Interactive Unit Staff