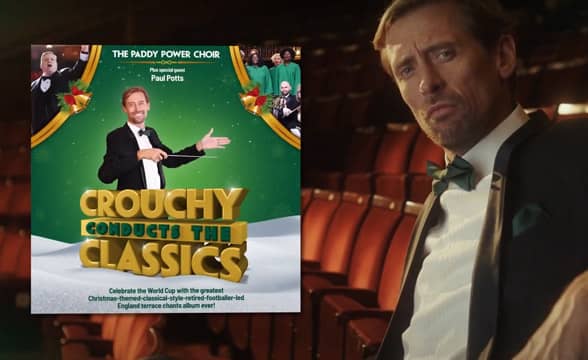 Peter Crouch, a former English soccer professional who now serves as one of Paddy Power’s brand ambassadors, has taken part in yet another initiative with the operator. To celebrate the upcoming FIFA World Cup in Qatar, Crouch and Paddy Power joined forces to release a festive charity album.

It looks like the recent commercial featuring Crouch as a conductor was actually a setup for the release of the new album. And what a payoff this release is!

Titled “Crouchy Conducts the Classics”, the new album celebrates the upcoming 2022 FIFA World Cup that will, for the first time, coincide with the Christmas holidays. Speaking of first times, this will be Crouch’s first stint as a conductor and will see him lead a 20-piece orchestra. Other than Crouch, the new initiative will also feature Britain’s Got Talent winner Paul Potts as a performer.

To make this release possible, the operator launched a new subsidiary called Paddy Power Records. The performances in the album will be sung by the Paddy Power Choir. The album will include many classic songs with a betting twist, celebrating the holidays and the World Cup.

The album will include the following tracks:

All Proceeds Will Go to Charity

While the album’s main goal is to excite punters about the upcoming World Cup, it also serves an additional purpose. As announced by Paddy Power, all of the money from album sales will go to fund Stonewall’s pro-LGBT+ efforts in Qatar. Stonewall is a famous charity organization that fights for equal rights for LGBT+ people.

Paddy Power hopes that Crouch and Potts’ popularity paired with the amusing yet festive theme of the album will ensure the album’s success, helping the operator sponsor Stonewall’s efforts in Qatar.

The two celebrities spoke about their participation in the new initiative. Crouch admitted that he had always wanted to release an album and believed this was the perfect opportunity.

The whole team put in a big shift and I’m really happy with the teamwork, dedication and the finished product. With Paddy Power’s bankroll and the people’s support, we hope a Christmas number-one album is coming home… at the very least.

Potts added that he hopes the snarky album will inspire soccer enthusiasts in England to cheer on England’s team and “give the country the lift they so desperately need right now. He added that he was thrilled to work together with Crouch, whom he has always respected.

2022-11-15
Previous Post: Further Adjustments Are Made to Macau Junket Law Before Approval in December
Next Post: Where to Watch/Listen: Horse Racing Coverage Nov. 16-20