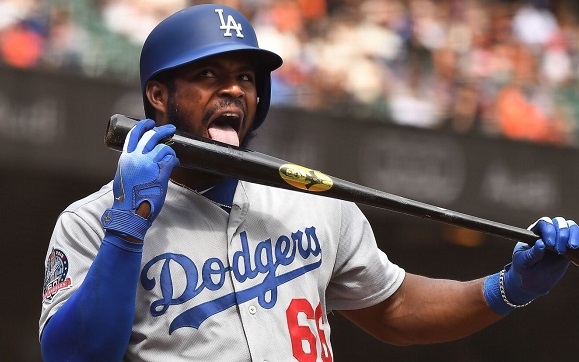 Yasiel Puig had a meteoric rise to MLB stardom. The 31 year old Cuban born player had some good playing seasons in MLB. He made some righteous bucks too. In 2012 he signed a $42M, seven year deal with the Dodgers, where he spent most of his playing days.

Puig washed out of MLB after 2019 and ended up playing in South Korea, where he currently plays. He hit .277 for his career in MLB and swatted a total of 132 home runs. Even with those numbers it is safe to say that his career was a let-down for both him and the Dodgers. He closed out his MLB career in Cleveland.

Puig liked to throw down action on sporting events. And while we this may be an every day option for regular citizens like you or I, it can be a problem for others, particularly professional sports players who have specific rules not to engage is sports betting.

Not only did Puig break MLB rules, he lied to federal investigators who were investigating an illegal underground sports betting ring led by ex-minor league player Wayne Nix.

“When given the opportunity to be truthful about his involvement with Nix’s gambling businesses, Mr. Puig chose not to,” IRS Criminal Investigation Los Angeles Field Office Special Agent in Charge Tyler Hatcher said in the release. “Mr. Puig’s lies hindered the legal and procedural tasks of the investigators and prosecutors.”

Did Not Bet Baseball

Unlike more the much more famous betting scandal of Pete Rose, there is no proof, as of yet, that Puig bet on baseball. Apparently he stuck to wagering on basketball, football and tennis of all things. He lost at least $280,000 on over 1000 bets placed.