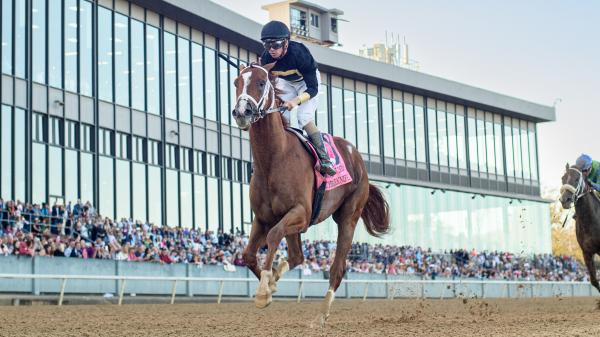 As a youth growing up in Louisville, Ky. near Churchill Downs, trainer Brad Cox dreamed of one day winning the Kentucky Derby Presented by Woodford Reserve.

It happened last year, though not in the way Cox believed, as it took until Feb. 21 of this year for Medina Spirit to be disqualified after traces of a banned substance was found in his system and for the Cox-trained Mandaloun to be declared the official winner of the Run for the Roses.

Next month, when the 2022 Kentucky Derby rolls around, Cox would love nothing better than to win the opening leg of the Triple Crown in a more time-honored way. His chances of registering a Derby Double skyrocketed April 2.

In winning the $1.25 million Grade 1 Arkansas Derby for 3-year-olds at Oaklawn Park in decisive fashion and beating Barber Road and filly Secret Oath, Gold Square’s Cyberknife picked up 100 qualifying points and ensured Cox’s son of Gun Runner a spot in the May 7 Derby at Churchill.

“I’d like to throw some roses over a horse after the Kentucky Derby, I’ll tell you that,” Cox said. “That would be an incredible experience.”

As much as Cox has a major player for the opening leg of the Triple Crown in Cyberknife, he could have two other starters in the May 7 classic. Tawny Port finished second Saturday in the Grade 3 Jeff Ruby Steaks and Zozos was second last weekend in the Grade 2 Twinspires.com Louisiana Derby. Both of those 3-year-olds have 40 qualifying points—usually enough to merit a spot in the field limited to 20 horses.

“We have a good hand with Cyberknife (being) the most accomplished and experienced of them,” Cox said. “In the last few weeks we went from not having a horse with a qualifying point and now we have three in the field, so we’ll see what happens.”

Cyberknife, bred by Ken and Sarah Ramsey in Kentucky out of the Flower Alley mare Awesome Flower, notched his first stakes win in his sixth career start. His previous start in a stakes came in the Jan. 22 Grade 3 Lecomte Stakes at Fair Grounds Race Course & Slots when he finished a well-beaten sixth. That seemed to dim his Kentucky Derby hopes, but a fast, three-length win in a Feb. 19 allowance optional claiming race at Fair Grounds convinced Cox to give him another try on the Road to the Kentucky Derby.

“This is a good colt. We’ve liked him for a long, long, time. I was a little taken back by his Lecomte but he ran very well in the allowance race,” Cox said. “He’s not polished mentally but he’s getting there all the time. The more he races, the better he’ll get. He’s starting to put it all together.”

As for Cyberknife’s chances in the demanding 1 1/4-mile Kentucky Derby, Cox was pleased with the way he made a middle move into quick fractions of :46.54 and 1:11.22 and was still able to fend off late challenges in Saturday’s 1 1/8-mile test.

“He’s a horse that’s in the game early and you need a fast horse and need to be close most years in the Kentucky Derby,” Cox said. “He’s definitely a player.”

WSS Racing’s Barber Road, whose rally from eighth in the nine-horse field landed him a second-place finish and 40 qualifying points, figures to be in the starting gate on the first Saturday in May. With a total of 58 points, the son of Race Day trained by John Ortiz, is ninth on the Kentucky Derby leaderboard and has now finished either second or third in a string of five straight stakes.

“Winning effort once again,” Ortiz said. “The distance proved to be the right angle that we’re looking for. Obviously, we still might need a little bit more. I think we secured a spot for the Kentucky Derby starting gate. (Jockey Reylu Gutierrez) did a fantastic job. Once again, we’ve still got to work out our traffic situation, but the horse has got guts. You know what, you’ve got to run through traffic in the Kentucky Derby and you need a horse that’s got guts. I think we’ve got the right thing and I’ve got the rider for it.”

The third-place finish after some trouble at the start by Secret Oath likely ended the Kentucky Derby dreams for the Arrogate filly owned by Briland Farm and trained by the legendary D. Wayne Lukas, A 7-5 favorite, Secret Oath gained only 20 qualifying points to land 22nd on the Leaderboard and will likely target the May 6 Grade 1 Longines Kentucky Oaks, where she is fourth on the Leaderboard among 3-year-old fillies.

“We got outrun today. Made that big move (on the second turn) and I thought she would sustain it, but she didn’t,” Lukas said. “The race didn’t unfold like you’d hope it to. It just didn’t come together. We got bumped at the start and that got her back too far and then she made that monster move (on the second turn). It’s hard to sustain it. She might have run that quarter pretty damn fast.”

A winner of three of six starts, Cyberknife has earned $860,000. He was bought by Joe Hardoon, agent, for $400,000 from the Ramsey Farm consignment at the 2020 Fasig-Tipton Selected Yearlings Showcase. He is the fourth foal and first stakes winner for Awesome Flower, who has a 2-year-old Tapit colt named Tapit Shoes and a weanling Authentic colt.

Cyberknife ($13.60), who unseated jockey Florent Geroux in the post parade, was sent off at 5-1 odds and was fourth after an opening quarter-mile in :22.11. He then moved up between horses on the backstretch under Geroux and took over from the front-running Kavod midway on the final turn.

Barber Road and Secret Oath, who were eighth and ninth, respectively, after a half-mile were the only horses who mounted charges from the rear as Cyberknife spurted away to a 2 1/2-length lead at the eighth pole and extended his margin slightly in the final furlong while covering the 1 1/8 miles in 1:50.42.

Doppelganger made his first start for trainer Tim Yakteen and finished fourth to pick up 10 points. The son of Into Mischief had been trained by Bob Baffert for his three previous starts but was shifted to Yakteen’s barn to pick up Kentucky Derby points. Baffert, who trained Medina Spirit, is in the midst of a two-year suspension at Churchill Downs in the aftermath of the failed drug test in last year’s Kentucky Derby.

The 10 points puts Doppelganger 33rd on the Kentucky Derby Leaderboard and leaves him with virtually no hope of running in a 20-horse field.

Grade 2 Rebel Stakes winner Un Ojo, the one-eyed New York State-bred gelding who won the Rebel at 75-1, never fired and finished eighth. Through his Rebel win, he has 54 points (good for 10th) and could start in the Kentucky Derby if his connections elect to do so. -Bob Ehalt

After knocking on the door in three starts since her maiden win at first asking, Yuugiri would not be denied the victory April 2 in the $600,000 Grade 2 Fantasy Stakes at Oaklawn Park.

The 3-year-old Shackleford filly went straight to the front in the 1 1/16-mile test and repelled the game challenge of Beguine with determination to secure her first graded stakes victory—a win that also put her in possible contention for the May 6 Grade 1 Longines Kentucky Oaks at Churchill Downs.

The Fantasy awards qualifying points on the Road to the Kentucky Oaks to the top four finishers on a 100–40–20–10 scale, landing Yuugiri third on the Kentucky Oaks Leaderboard with 114 points, just behind the undefeated Kathleen O. (150 points) and champion Echo Zulu (130 points).

Trainer Rodolphe Brisset was noncommittal about a potential Oaks bid, but was thrilled to see Seike Yoshihara and Tsunebumi Yoshihara’s homebred filly pick up black type.

“The owners live in Japan and they bred the horse, so it was great for her to get the win for them,” he said. “Obviously, she has earned the (Kentucky Oaks) points too. Let’s see how she comes out of the race first and then we’ll have a meeting with the ownership and see what we’re going to do.”

“She was relaxed,” Brisset said. “The fractions were pretty fast, but she just kept digging in. ‘Flo’ did a great job, too.”

Yuugiri paid $10.20 as the 4-1 third choice. After Beguine came Bubble Rock, who finished three lengths back to complete the trifecta, two lengths ahead of fourth-place finisher I Feel the Need. Dream Lith, the 8-5 favorite, finished fifth. -Claire Crosby