A man who described himself as a competitive poker player had a large role in organizing the rally that led to the deadly violence in Washington, DC, last January.

Dustin Stockton and Jennifer Lawrence were dubbed the Bonnie and Clyde of MAGA World, and now are telling Congress about organizational efforts around the Jan. 6 rally in Washington DC that turned into an insurrection. (Image: Politico)

Dustin Stockton, 38, from Reno, Nevada, appeared before Congress for a deposition Tuesday, providing seven hours of testimony to the Select Committee to Investigate January 6th Attack on the United States Capitol. He and his fiancé, Jennifer Lynn Lawrence, who is to be deposed on Wednesday, reportedly are cooperating and ready to reveal what they know about how a rally turned into a riot.

Stockton’s lawyer Josh Ness said his client brought with him a “treasure trove” of documents and suggested that members of the Trump administration and Congress “have good reason to be quivering in their boots today.”

Once darlings and power brokers of the Tea Party movement and Trump’s first campaign, Stockton and Lawrence were dubbed by Politico Magazine in a November feature as The Bonnie and Clyde of MAGA World. Now their cooperation could reveal key insights about how the Jan. 6 insurrection was organized and who may have been responsible for mob action that resulted in five deaths and 138 Capitol police officers injured.

Just talked to @DustinStockton. He says he spoke with the January 6 committee for about seven hours and their questions were focused on communications rally planners had with members of Congress and senior members of Trump’s team including Mark Meadows.

As a poker player, Stockton wasn’t particularly accomplished. He has four recorded in-the-money finishes as a live tournament player, including a win in a $150 nightly at Caesars Palace in 2015, and more recently, a 238th-place finish in a $1,500 event at the 2019 WSOP. But he had a poker mentality that shaped his worldview.

“I didn’t have a college degree or any serious career prospects outside of the challenging, unpredictable world of competitive poker,” he wrote.

For a while in 2008, he was trying to make ends meet as a forklift driver and online poker pro, but would have a change in career perspective after his first child was born.

Frustration with the leadership of Harry Reid, then the Senate Majority Leader from Nevada, and with watching the value of his newly purchased home in Reno go underwater, drove Stockton to found the Western Representation PAC. He quickly discovered his skills as an online organizer and fundraiser.

In the five years that followed, Stockton went after Reid and went from a warehouse worker and part-time poker player to rubbing elbows with political heavyweights like Steve Bannon, who he first met at the Conservative Political Action Conference (CPAC) in 2012.

“The thing I always loved about poker is, in most of life, ruthlessness is frowned upon,” Stockton told the Washington Free Beacon in 2013. “At a poker table, it’s the opposite. The guy with the most strategy and the most ruthlessness is rewarded with all the money. It’s a pretty good gig. Politics is similar in that the more you set up your play, the more you’re rewarded.”

The glowing profile in the conservative publication gave him the name “Mr. Tea Party,” and, in it, Stockton said the crossover between the poker table and politics “is really kind of disgusting.”

He also talked about the games he knew of in and around the Beltway.  “There’s a handful of consultants who are good, but most of the poker games I’ve played in DC, pros would pay to get access to,” Stockton said. “These guys have a bunch of money, and they’re as crappy at poker as they are at politics. It’s a beautiful thing.” 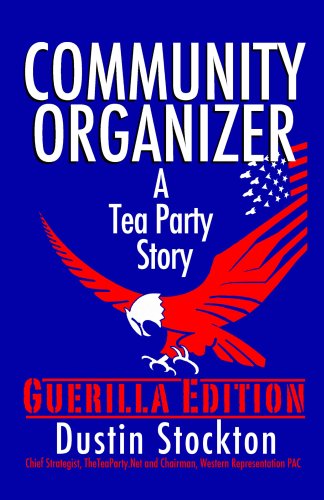 Stockton, alongside Lawrence, worked for Bannon at Breitbart. According to a Rolling Stone profile on the two, they “reported directly to Bannon and honed their skills making mischief and headlines on ‘special projects’ for his site.”

Usually dressed more like people found in the Palace Station Casino on a random Tuesday night rather than like their ivy-league, Brooks Brother-wearing colleagues, and smelling like cigarettes or weed (to cure his hiccups, of course), Stockton and Lawrence never cracked through to the interior of the political establishment.

Still, they persisted, throwing their skills behind We Build the Wall, a non-profit organization that used GoFundMe to raise more than $20 million that was supposed to be turned over to the Treasury to build a wall along the southern border with Mexico. The money raised for that effort never found its way into federal coffers, however, leading to federal fraud charges against Bannon.

As part of that investigation, US Postal agents raided the couple’s RV outside a casino hotel in Mesquite, Nevada, and seized their computers and cell phones. Trump eventually pardoned Bannon before he faced trial. Stockton said there was talk of a “blanket pardon” for anyone involved in the failed We Build the Wall campaign. When those never materialized for anyone but Bannon, Stockton said that’s when cracks in their loyal support emerged.

“We are just tired of watching people take advantage of other people and then us being forced to bear the consequences of it,” Stockton told Politico. “There are a lot of grifters in our space, a lot of people who are not acting in good faith, and we know a lot about that, and we are ready to share.” 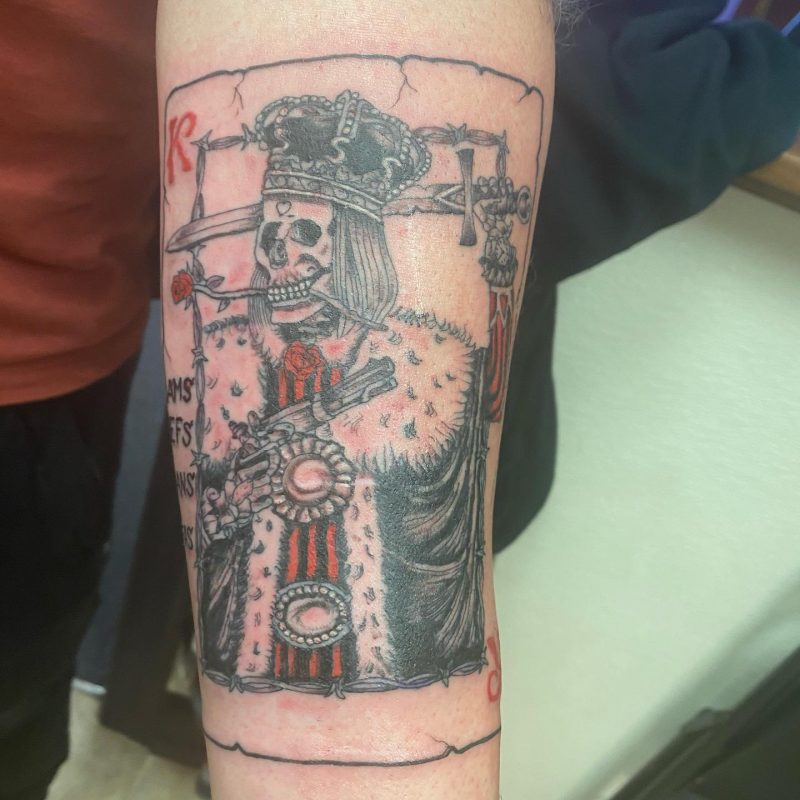 In the week after Jan. 6, Stockton shared pictures (from an “Undisclosed Location”) of his new suicide-king tattoo. (Image: Facebook/dustin.stockton)

Stockton told Politico he now believes Joe Biden was fairly elected President of the United States. But last November, he was sure the election was stolen, which led him and Lawrence, who works with the pro-Trump PAC Women for America First, to get involved in a multistate bus tour spreading election conspiracy theories to angry and impressionable crowds.

People who spoke at these rallies, Stockton and Lawrence included, repeatedly encouraged people to descend on DC on Jan. 6, for the March for Trump rally. They both deny cheerleading the Capitol siege when that fateful day arrived, however, claiming they were frustrated by what seemed like fighting words by Trump and others, and leaving the rally before violence erupted.

Since then, it’s not so much that the mega-MAGA couple has had a change of political philosophy, but more that they have had their eyes opened to corruption surrounding their cause. They say they see it as their civic duty to help expose the truth — particularly for those who attended the Jan. 6 rally in good faith.

Stockton told the Nevada Independent on his way to Washington, DC, “It’s important to us that the hundreds of thousands of people who did not participate in any violence have their voice heard in the official proceedings. We have as much interest and desire as anybody to get to the bottom of the tragedy at the Capitol nearly a year ago because it has tarnished the peaceful protests we worked so hard to put together.”

In an interview with Anderson Cooper following his testimony on Tuesday, Stockton explained how someone so committed to the MAGA cause could have their eyes opened to a different Donald Trump. “In a lot of ways we bought into what essentially turned out to be a bluff.”

“The buck has got to stop at Pres. Trump.”

Dustin Stockton, one of the organizers behind pro-Trump rallies that took place Jan. 6, tells CNN’s @AndersonCooper that he feels “a sense of betrayal.”

He testified before the House select committee investigating the Capitol riot. pic.twitter.com/15pMziDY0E