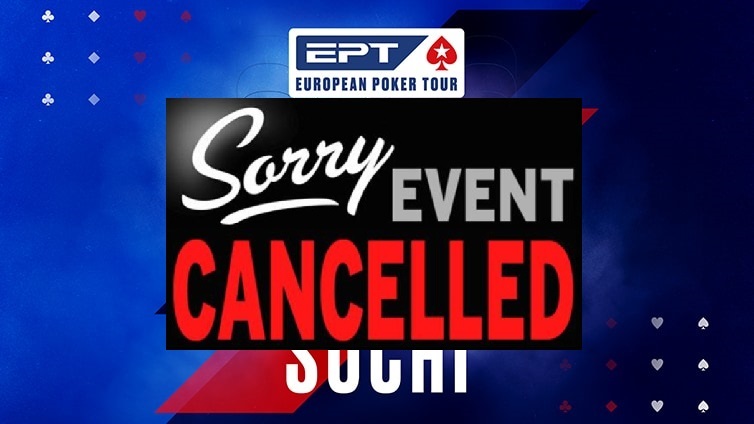 PokerStars has announced that EPT Sochi is cancelled due to Russia’s ongoing military assault on the Ukraine.

CardsChat received an update from a PokerStars representative on Thursday. The poker operator had previously told us that EPT Sochi had been rescheduled and would take place in October.

However, after reviewing the situation, executives at PokerStars have decided to postpone the event indefinitely.

The EPT was due to start on March 18 at Casino Sochi, Russia. However, following the outbreak of war in Ukraine, a decision was made to host it later in the year. Although logical, the postponement raised a few eyebrows within the poker community.

SERIOUSLY? RESCHEDULED? Anybody going to participate in a tournament in Russia?

One CardsChat follower questioned whether anyone would want to play in Russia right now. Other Twitter users remarked that cancelling the series altogether would be a better option.

Subsequently, PokerStars’ tournament team had some time to reflect, and a second decision was made to cancel EPT Sochi.

“PokerStars can confirm that EPT Sochi has been cancelled. An event will not be held in Sochi until such time that it is safe for staff and players, and appropriate to do so. Qualifiers can contact live@pokerstarslive.com with any queries,” read the message sent to CardsChat.

There is a growing sense of unease and consternation from countries around the world as Russia continues to bomb Ukrainian cities. As such, governments, financial institutions, and businesses are in the processes of blackballing Russia.

Russia’s financial system is in a state of chaos following the removal of several banks from the SWIFT system. This, coupled with internal blocks on foreign bank transfers, has affected everyone in Russia, including poker players.

Businesses around the world are also taking a stand. On Friday, certain bars and supermarkets in the UK stopped selling Russian vodka, while international brands, such as Nike and Ikea, have temporarily stopped doing business in Russia.

Russian citizens, who aren’t to blame for the attacks on Ukraine, are now suffering the consequences of President Vladimir Putin’s decisions. And, with the wave of sanctions mounting, PokerStars has decided that cancelling EPT Sochi is the best course of action.