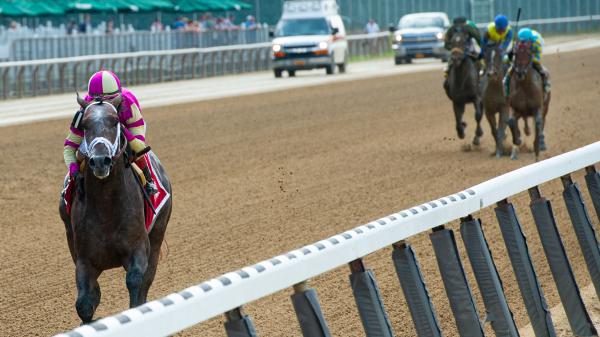 Five Key Takeaways from an Exciting Holiday Weekend of Racing

Tom Pedulla presents five key takeaways from the $740,000 Stephen Foster Stakes at Churchill Downs, which carried an automatic expense-paid berth in the Longines Breeders’ Cup Classic at Keeneland, and other major developments during the holiday weekend:

STREAKING: Olympiad has come to hand in a big way for Hall of Fame trainer Bill Mott. He rattled off his fifth consecutive victory when he repelled late-running Americanrevolution by one length in the Stephen Foster. The 4-year-old son of crack sprinter Speightstown last lost on Dec. 4 at Aqueduct, when he finished fourth to Americanrevolution. The reversal of fortune against his rival points to how far Olympiad has come. “I think as he’s gotten older, he’s gotten faster in each start,” said jockey Junior Alvarado. Said Mott: “There were some nice horses in the field and I thought he did things rather easily.” Olympiad’s next target: the Aug. 6 Whitney at Saratoga Race Course.

FALLING SHORT: Mandaloun, elevated to victory in last year’s Kentucky Derby following Medina Spirit’s disqualification, turned in his second consecutive disappointing performance when he finished fourth in the Stephen Foster. The Brad Cox trainee was competing for the first time since he ran a distant ninth in the $20 million Saudi Cup on Feb. 26. “We were expecting a big effort [Saturday],” jockey Florent Geroux said of the Stephen Foster. “He never quite grabbed the bit around the turn.”

HUGE RELIEF: Trainers never know how their horses are going to react after they journey halfway around the world for the Dubai World Cup. For that reason, Todd Pletcher was extremely gratified to see Life Is Good, in his first start since he faded to fourth at Meydan Race Course, on his toes during the post parade and full of fire when he dispatched Grade 1 winner Speaker’s Corner by five lengths in the John A. Nerud Stakes at Belmont Park. “You never take anything for granted,” Pletcher said. “There was only one outcome that was OK, and that was for him to win.” Flavien Prat replaced suspended Irad Ortiz Jr. aboard Life Is Good, who also is set to make his next start in the Whitney.

WOW PERFORMANCE: Pletcher always thought Charge It ossessed abundant talent, which is why he sent him into the Grade 1 Curlin Florida Derby Presented by Hill ‘n’ Dale Farms at Xalapa for only his third career start. He was rewarded with a game runner-up effort in the Florida Derby only to be bitterly disappointed when the son of Tapit struggled home 17th in the Kentucky Derby Presented by Woodford Reserve. Charge It was found to have a displaced palate after that dismal result. Charge It suggested he can still make a run at 3-year-old honors with an eye-popping 23-length score in the Grade 3 Dwyer Stakes. Although the connections could use the July 30 Jim Dandy as a prep for the Aug. 27 Travers, Pletcher indicated he will give serious thought to training Charge It up to the “Mid-Summer Derby.”

SUCCESSFUL TITLE DEFENSE: Champion female sprinter Ce Ce appears to be improving with age. She captured the Princess Rooney Invitational Stakes by 3 ¼ lengths last year at Gulfstream Park. This year’s margin increased to 6 ½ lengths and was good for an automatic fees-paid berth in the Breeders’ Cup Filly & Mare Sprint at Keeneland. “I just don’t have enough superlatives and good things to say about her,” trainer Michael McCarthy said. “She’s very special.” McCarthy may give the 6-year-old mare two more starts ahead of the Breeders’ Cup and follow the path that got them there last year. That would mean starts in the Grade 1 Ballerina Stakes at Saratoga and the Grade 2 Chillingworth Stakes at their Santa Anita home base.

2022-07-04
Previous Post: Wildfire Casino Is Under Construction In Downtown Las Vegas
Next Post: Crazy Dealer Stories from the 2022 WSOP