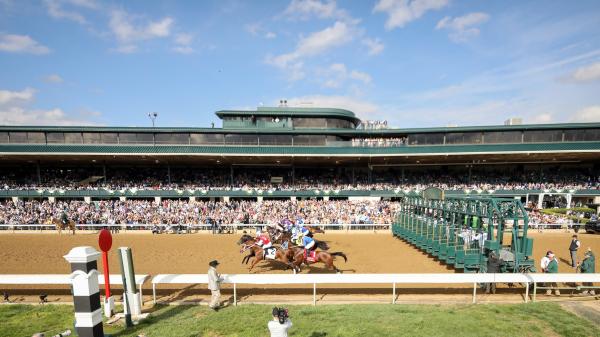 COX’S TRIO: It appeared that Brad Cox, Eclipse Award winner as the leading trainer in North America each of the last two years, might not have a Kentucky Derby starter as March wound down. But the cream has a way of rising to the top, and now Cox has more Derby starters than jockeys after Tawny Port’s Lexington victory with Florent Geroux aboard. Geroux already is committed to Cox’s Cyberknife, winner of the April 2 Arkansas Derby. Cox is sure to be besieged with calls from agents eager to place their riders on either Zozos, runner-up to Epicenter in the March 26 Twinspires.com Louisiana Derby, or Tawny Port, now coming off his first win on dirt. As Cox quickly pointed out, it’s a good problem to have.

ONE TO WATCH: Major General may become a major player as the 3-year-old season unfolds. He displayed dramatic improvement when he placed second in the Lexington Stakes after setting the pace. It was his first race since March 12, when he floundered in 10th place in the Lambholm South Tampa Bay Derby in his sophomore debut. He had gone 2-for-2 as a juvenile, including a victory in the Sept. 18 Iroquois Stakes at Churchill Downs. Jockey Irad Ortiz Jr., found much to like about Major General’s Lexington. “He ran really good. He broke a little better. He’s still learning,” Ortiz said. “In the stretch, he was looking a little bit, waiting for some company.”

EPICENTER ROCKS: Twinspires.com Louisiana Derby winner Epicenter, owned by Winchell Thoroughbreds, looks to be sitting on a big race after he worked five furlongs in 1:00.80 on Sunday at Churchill Downs. He was positioned inside of Gun It, a 6-year-old who is a three-time winner. Hall of Fame trainer Steve Asmussen drove approximately eight hours overnight and arrived in time to eyeball the workout. He liked everything he saw as he chases an elusive Derby victory. “We’re just trying to put the building blocks and space for him to handle the mile and a quarter in the Derby here,” Asmussen said. “I couldn’t feel any better with how he’s doing here and how he loves Churchill Downs.”

DAZZLING WORK: White Abarrio worked for the first time since his Curlin Florida Derby Presented by Hill ‘n’ Dale at Xalapa Farms score — and it was a sight to behold. He stopped the clock in 34.55 seconds, fastest of 41 workouts recorded at the distance at Gulfstream Park. Jockey Junior Alvarado subbed for regular rider Tyler Gaffalione. “He was just skipping over the ground. It was like he wasn’t even touching the ground,” Alvarado said. “That was really nothing for him. When he got back to the barn, he wasn’t blowing like he was tired or anything.” White Abarrio has one more scheduled workout at Gulfstream before he departs for Louisville.

TRIUMPHANT RETURN: A sloppy racetrack did nothing to dampen the return of champion sprinter Jackie’s Warrior as he captured the $500,000 Count Fleet Sprint Handicap on Saturday at Oaklawn Park. In his first start since the Breeders’ Cup Sprint last November at Del Mar and with Joel Rosario aboard, he completed the six furlongs in 1:09.09 and fended off Letsgetlucky by three-quarters of a length. “I think that he needed the race and that is apparent,” Asmussen said. “But what a great starting point for a champion.” Jackie’s Warrior won for the ninth time in 13 starts. He hiked his earnings to $1,853,964 on behalf of owners J. Kirk and Judy Robinson.