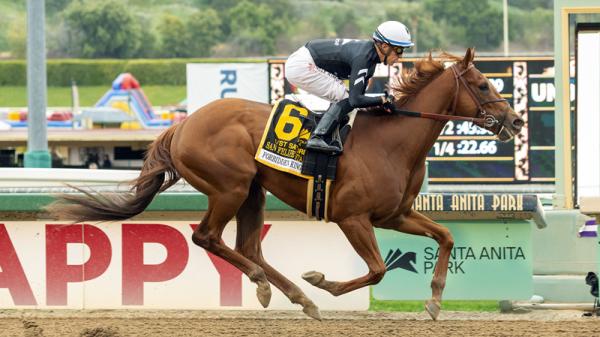 Veteran trainer Richard Mandella has run just six horses in the Kentucky Derby Presented by Woodford Reserve and none since 2004, in part due to unfortunate circumstances, such as when Omaha Beach was scratched from the race in 2019 due to a throat issue. But the Hall of Fame conditioner just might be returning to Churchill Downs this year with a talented 3-year-old.

His horse in the $401,000 Grade 2 San Felipe Stakes, MyRacehorse and Spendthrift Farm’s Forbidden Kingdom, earned 50 Kentucky Derby qualifying points in running six rivals off their feet in the March 5 race at Santa Anita Park. Historically, 50 points have been more than enough points to secure entry in the Derby, which often draws a capacity field of 20.

He scored points with observers Saturday, too. Throwing down blazing splits of :22.66, :45.90, and 1:10.46 in the 1 1/16-mile race, the even-money favorite distanced himself from the pack and coasted home a 5 3/4-length winner over Doppelganger, the race’s 8-5 second choice. The winner ran final sixteenth in just 7.09 seconds, but was not asked to extend himself in the stretch by jockey Juan Hernandez and won with his ears pricked. He was timed in 1:43.98, paying $4 to win.

“I was anxious to see this race and see if he would get two turns,” said Mandella, who notched his third San Felipe win. “He looked even better.

Happy Jack and Beautiful Art finished third and fourth, earning 10 points and five points, respectively, as part of the Road to the Kentucky Derby series. The runner-up did not earn any Derby points due to his trainer, Bob Baffert, being suspended from racing at Churchill Downs Inc.-owned properties through mid-2023.

Forbidden Kingdom, winner of the seven-furlong Grade 2 San Vicente Stakes in his prior start this year, returned to a packed winner’s circle, swelled in part by MyRacehorse owners, who own microshares in the speedy American Pharaoh colt.

“He’s really fast. A couple of jumps after we broke, he was in front already. I let him run because if you fight with him he tries to go faster,” Hernandez added. “I let him have fun. I turned him loose and he never stopped, he kept going the whole race. He proved how good he is today.”

Mandella said it was “tough to compare horses” when asked about Omaha Beach, but he called Forbidden Kingdom a colt who is “turning the corner and he’s grown up.”

Last year at 2, Forbidden Kingdom was quick but couldn’t sustain his speed to the wire in stakes, fading to third in the Speakeasy Stakes and second in the Grade 3 Bob Hope Stakes.

Forbidden Kingdom’s owners are prior Kentucky Derby winners, teaming with other partners to capture the COVID-19-postponed Derby in 2020 with Authentic. The Baffert-trained Authentic also won the 2020 San Felipe.

Bred by Springhouse Farm in Kentucky, Forbidden Kingdom was sold to Spendthrift Farm and MyRacehorse for $300,000 as a yearling at the 2020 Fasig-Tipton Selected Yearlings Showcase Sale from the Paramount Sales consignment. He is out of the graded stakes-winning Five Star Day mare Just Louise, the dam of three winners from four foals to race. Two of her unraced foals include a 2-year-old Bolt d’Oro colt and a yearling filly by Not This Time.

Though Just Louise was a sprinter, Forbidden Kingdom appears to take after American Pharoah in terms of having both speed and stamina. American Pharoah, who also sired Grade 1 Beholder Mile winner As Time Goes By on Saturday, won the 2015 Triple Crown for Baffert.

Forbidden Kingdom now has a record of three wins, a second, and a third from five starts and earnings of $434,000.

“It’s unbelievable, we were at the Derby and Breeders’ Cup with Authentic and that was amazing,” said Michael Behrens, founder and CEO of MyRacehorse. “But to have this one and pick this horse as a baby. To go through the whole journey. To watch Mandella see him through his maturation and control his brilliant speed… And to do this today with all of these people, it’s a touchdown.”