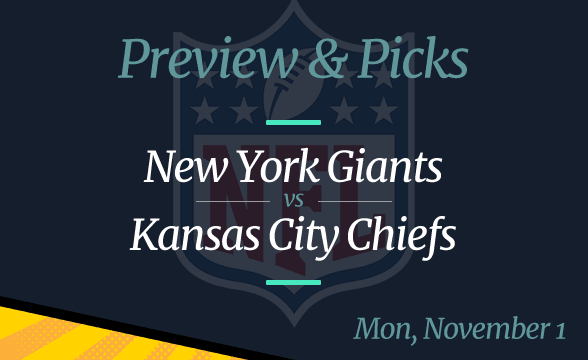 Hardly anyone could have expected it, but the Kansas City Chiefs are bottom in the AFC West. It sounds crazy that the reigning AFC champion would be 3-4, but that happens to be the case.

Apart from their pride, the Kansas City Chiefs also need to worry about their Playoff future. If they don’t straighten themselves up ASAP, they might end up missing out on the postseason.

On the other hand, they do not need to be too worried about their MNF game, considering that their next opponent is one of the NFL’s worst teams. The team in question is the New York Giants, who are 2-5 ahead of Week 8.

All odds are per DraftKings as of October 29.

A Blowout Loss After a Blowout Win?

So far, the Giants have only managed to win only two games this season. One of those was the Week 7 game against the Carolina Partners, which was a 25-3 blowout.

However, the matter of fact is, that the Panthers were not in their top shape in that match. In fact, the Panthers were playing without their best player – the NFC’s arguably best running back Christian McCaffrey.

Other than that, they have only won against New Orleans, who have been struggling offensively the entire season. It seems that the Giants can do well against teams that aren’t too great offensively. Unfortunately for them, their defensive team will be locking horns with one of the NFL’s best offenses on Monday night.

Can the Chiefs Cover the Spread?

The Chiefs are 3-4 in 2021 and their defense is to blame. With 203 points conceded in seven games, they’re among the worst in the entire league.

Their offense, however, has been pretty decent. They have scored a total of 188 over seven games, which is 26.85 per game on average. Their average could’ve been even better if it weren’t for a blowout defeat to the Baltimore Ravens in Week 7.

They scored just 3 points that evening, which has their worst offensive display in the Patrick Mahomes era. That said, you can be sure that the Kansas QB will want to make up for it, which is why it’s no surprise the oddsmakers have set the spread to 10 points.

Speaking of the spread, the Chiefs have had trouble covering it in 2021. Actually, in all the games they played this season, they were the favorite. They disappointed everyone in four games, but something similar mustn’t happen in Week 8. Instead, they need to grab a big win which would give them a morale boost for the rest of the season.

Pick: Kansas City Chiefs to win and cover the spread; over should hit