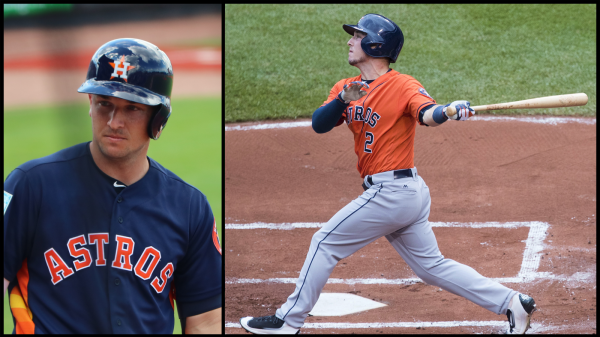 What do you do in the off-season from major league baseball after winning your second World Series? If you’re Houston Astros third baseman Alex Bregman, you travel with your family to watch one of your racehorses win at historic Churchill Downs.

Bregman Family Racing’s Goldblooded was victorious beneath the Twin Spires in her third career outing Nov. 16, with Bregman in attendance with his wife, Reagan, their 3-month-old son, Knox, and several other family members.

The victory wasn’t the first in racing for the major leaguer, though he said it was the first time he witnessed one of his horses win in person. Rusty Arnold trains the 2-year-old filly, who is scheduled to sell Nov. 17 at Keeneland in the November Horses of Racing Age Sale as Hip 5303.

“We’ve been at this for about a year, and it’s the first time we’ve been able to watch one of our horses in person,” Bregman said. “We got in town about 45 minutes before the race and got over here just in time to check out Goldblooded in the paddock. Then, we got to watch the race with [trainer] Rusty [Arnold], my wife, son, and in-laws.

“This is surreal to watch [Goldblooded] go on to win like that. In the World Series with two outs in the ninth inning, you’re not as nervous as this. Being a player is just sort of what you do. Here you’re watching your horse run, freaking out, sweating, and hearts beating. This is what it’s all about. This is my first time here at Churchill, and it’s unbelievable.”

Goldblooded officially tallied a 3 1/2-length victory with jockey Martin Garcia in the irons in the maiden $150,000 claiming event. She earned $40,980 for her victory and awarded bettors with an $8.74 return. This was Goldblooded’s first start on the dirt. In her previous two starts, the Goldencents   filly finished eighth and third on the turf at Kentucky Downs and Horseshoe Indianapolis, respectively.

Bregman Family Racing  has two wins, four seconds, and two thirds from nine starts for their horses this year, with earnings of $209,290. Cadillac Candy provided the Bregman Facing Racing with an initial victory in May during the spring meet at Churchill Downs.

Bregman and several teammates watched that race from afar on television at Minute Maid Park, the Astros’ ballpark.

Bregman’s family has ties to horse racing. His father, Sam, is chairman of the New Mexico Racing Commission, and Reagan grew up riding horses. Sam Bregman’s father, Stan, used to take Alex to The Downs at Albuquerque.

It’s been a good four weeks for Bregman after helping the Astros win their second World Series in the last six years. The 28-year-old is signed with the Astros through 2024.

“That’s always the hope to make it to the World Series,” Bregman joked. “We’ve got a good group of guys to try and get back there.”