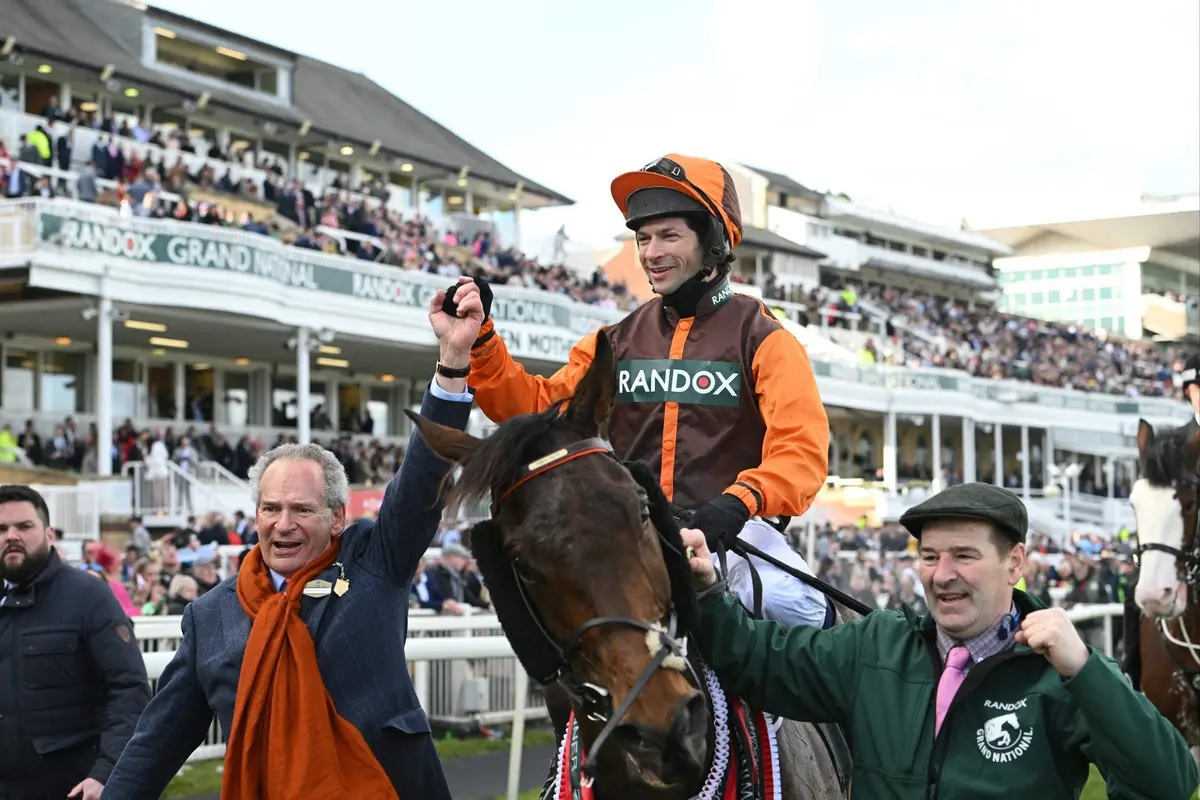 Noble Yeats, a 50-1 outsider ridden by an amateur jockey, won the Grand National on Saturday in a thrilling finish to the UK’s famous handicap steeplechase.

Sam Waley-Cohen celebrates winning the Grand National at Aintree in Liverpool, England on Saturday. The bookies were celebrating, too. (Image: Evening Standard)

Sam Waley-Cohen is the first amateur to win the race since 1990. He rode novice chaser Noble Yeats to victory by two and a quarter lengths ahead of favorite Any Second Now.

It was the final race of Waley-Cohen’s career. The 39-year-old dentist announced his retirement from the sport two days prior. He did not expect to finish in style. He told ITV afterwards it was “a fairytale, a fantasy.”

The Grand National is among the most famous – and unpredictable — horse races in the world, and the biggest in terms of global viewership. An estimated 500 million to 600 million watch the event in over 140 countries, according to the BBC.

The unusual height and number of fences (30) and distance of the race (four miles) is not for the faint-hearted, and can create winners at long odds. Just 15 of the 40 horses who set out on Saturday completed the race.

But while the National is famous for throwing up some surprising winners, Noble Yeats really is a shock. Bookies told The Racing Post the horse was one of the “least fancied runners” — in other words, the least bet-upon horse — in one of the biggest betting events of the year in the UK.

That’s good news for them. The Grand National captures the “one-bet-a-year” demographic, attracting customers who do not habitually make bets, but see gambling on the race as a harmless tradition. Around £300 million (US$390 million) is wagered on the event each year.

As results go, this is certainly one of the better Grand Nationals we’ve had,” Ladbrokes spokesperson Nicola McGeady told The Post. “Noble Yeats just didn’t prove popular with punters [bettors] at all today and, after last year’s result, we have been spared another costly payout.”

The National has seen a string of well-backed winners in the past few years. Last year, Minella Times took the prize at 11-1. Before that, Tiger Roll won the event in 2018 and 2019, the first back-to-back winner since the legendary Red Rum in the 1970s.

Racegoers Back on Track

This year’s race was also the first to run in front of a live audience since the onset of the pandemic. Last year, the race was run “behind closed doors,” while betting shops were also shuttered.

Those conditions resulted in the biggest online betting event in the history of the UK gambling industry, according to bookmakers.

In 2020, the race was initially postponed before being held as a simulated virtual event, which was shown on national TV. The betting industry agreed to donate all profits from the event to the National Health Service to help health workers on the front line in the fight against the coronavirus.