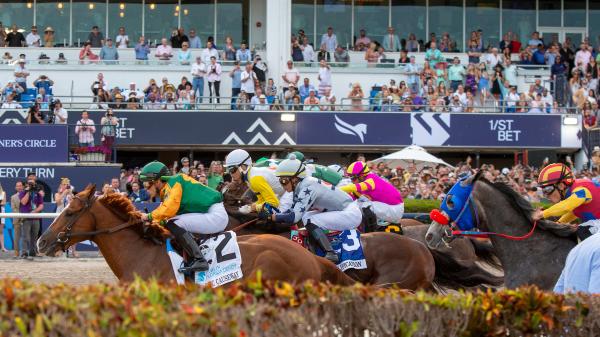 Winter has arrived, and while most areas prepare for two to three months of near-constant cold and the occasional blizzard, South Florida’s blissful season is well underway, with mild, sunny days and relative calm the norm, and sensational horse racing a weekly presence.

Gulfstream Park in Hallandale Beach kicks off its Championship Meet Monday, Dec. 26, and many of the best horses on the East Coast will race at the picturesque track for the next three-plus months until the meet ends on Sunday, April 2.

Gulfstream Park, owned by The Stronach Group, runs year-round after taking over the remainder of now-closed Gulfstream Park West’s (Calder Race Course) dates in 2020. But the quality level rises to 10 during the aptly named Championship Meet. Locally based owners, trainers, and jockeys are joined by many of the leading horsepeople from New York and Kentucky, making for an incredibly competitive season of racing and an enticing buffet of betting options for horseplayers.

Gulfstream’s main dirt track is 1 1/8 miles with a relatively short homestretch of 898 feet. The turf course is seven furlongs and was reopened for racing on Dec. 1 after extensive maintenance work that lasted for more than six months. In September 2021, Gulfstream unveiled an artificial-surface Tapeta Footings track that is one mile and 70 yards long. This gives track officials more flexibility in scheduling and helped keep the horse population attracted to Gulfstream this year while the turf course was being worked on. The Tapeta surface will be beneficial as a second option when rain forces races off the grass in the coming months due to inclement weather.

Live racing for the Championship Meet starts Monday, Dec. 26., and then is held from Wednesday to Sunday each week until April 2. First post time at Gulfstream varies during the Championship Meet, usually beginning between noon ET and 1:10 ET. Check Equibase.com for the latest information and entries.

Gulfstream Park offers win, place, show, exacta, quinella, trifecta, superfecta, daily double, Pick 3, Pick 4, and Pick 5 bets. It also offers a super high 5 wager on the last race of each card and the Rainbow Pick 6, a 20-cent bet that Gulfstream introduced several years ago. The wager covers the last six races of a card and the entire pool minus takeout is paid out if there’s one unique ticket with all six winners. If there is no single ticket holding six winners, 70% of the pool minus takeout is paid out to tickets with the most winners and 30% is carried over. Several times during the meet, including closing day on April 2, Gulfstream will hold a mandatory payout for the Rainbow Pick 6 where the entire pool is distributed to tickets with the most winners.

A new bet for the Championship Meet is the $1 Coast to Coast Pick 5, coupling up with fellow Stronach track Santa Anita Park and featuring a 15 percent takeout. The wager kicks off Saturday, Jan. 7 and will be offered every Saturday and Sunday throughout the upcoming Championship Meet.

Gulfstream’s online wagering platform is 1/ST Bet, which offers a multitude of promotions and also is the preferred betting destination for those playing other Stronach Group tracks, such as Santa Anita Park.

Irad Ortiz Jr. relinquished his stranglehold on the Gulfstream Championship Meet jockeys’ title after a three-year reign in 2022, as Luis Saez, who led the meet in wins during 2017 and 2018, took top honors once again with 122 victories. Irad Ortiz Jr. did edge Saez in purse earnings last year. Saez has been riding especially well at Gulfstream during the December ramp-up to the Championship Meet following a strong couple of months in Kentucky, where he won riding titles at Keeneland and Churchill Downs.

Those elite jockeys will be present during the 2022 Championship Meet, along with standouts Jose Ortiz, Tyler Gaffalione, Paco Lopez, and Javier Castellano. Hall of Famer Castellano secured five straight Championship Meet win titles from 2012 to 2016. Keep an eye out for jockeys who are based year-round at Gulfstream too, including Edgard Zayas, Miguel Vasquez, and Leonel Reyes. And take note of the recent news that British jockey Richard Kingscote, who won last spring’s Epsom Derby, will spend part of the winter riding at Gulfstream.

Todd Pletcher has dominated the trainer standings at Gulfstream’s Championship Meet, ending up as the leader in wins for 15 years in a row (from 2004 through 2018) and then again in 2020 and 2021. Last year, he posted 46 victories and a stellar win rate of 29% while finishing second to Saffie Joseph Jr., who had 58 wins. Pletcher usually starts several of his leading Kentucky Derby contenders in Gulfstream’s Triple Crown preps.

Two other trainers to keep tabs on are the aforementioned Saffie Joseph Jr. and Mike Maker. Joseph has built his stable up over the past five years and will have horses running at all levels during the meet. He won the training title last year and finished second in purse earnings behind Pletcher.

Maker, known for his skill in claiming horses and also for developing long-distance turf runners, finished third in earnings in 2022 and third in wins in 2021. Top trainers Mark Casse, Bill Mott, Christophe Clement, and Chad Brown also should be regularly represented in the big stakes races.

Both Gulfstream’s dirt track and its turf course have favored speed horses in recent Championship Meets. There is a small sample size on the new upgraded turf course since it just reopened for racing on Dec. 1. So far, however, horses with a variety of running styles have handled it well. The all-weather Tapeta track also plays fair overall, keeping in mind that it won’t be used as much during the Championship Meet.

The short stretch on the main track is an obstacle for horses coming from behind, and that’s especially true in lower-level races if a lone pacesetter shoots clear early and opens up through the far turn. One-mile dirt races at Gulfstream start in a chute and are held around one turn. The 1 1/16-mile races on dirt, on the other hand, are two-turn route races, and the track configuration puts horses drawn to the outside in the starting gate at a disadvantage with a very short run into to the first turn.

Gulfstream Park’s Championship Meet features stakes races worth $13.6 million, many of them grouped together on marquee Saturday cards. The first one occurs five days into the meet, when five graded stakes are slated for New Year’s Eve.

After that, the focus shifts to Gulfstream’s series prep races for the Kentucky Derby Presented by Woodford Reserve. The $250,000 Holy Bull Stakes will be held on Feb. 4, offering Derby points to the top five finishers on a 20-8-6-4-2 basis. Next up is the $400,000 Fasig-Tipton Fountain of Youth Stakes on March 4, which boosts the points to 50-20-15-10-5. On the second to last day of the Championship Meet, April 1, the 71st running of the $1 million Curlin Florida Derby Presented by Hill ‘n’ Dale Farm at Xalapa will be held. Fifteen Florida Derby winners have gone on to wear the garland of roses at Churchill Downs. The race offers points on a 100-40-30-20-10 distribution.

FanDuel TV is the go-to channel for comprehensive coverage of racing at Gulfstream Park. The network makes a priority of breaking down each race with extensive handicapping and on-site paddock analysis. Big-event races such as the Pegasus World Cup and the Florida Derby have been broadcast by NBC Sports in recent years. NBC’s 2023 horse racing schedule has yet to be announced.