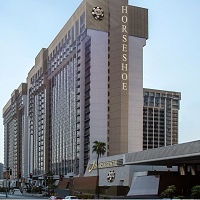 Our last look at the gambling news of 2022 is a good one, as we help to welcome the Horseshoe Las Vegas! Check out what’s new at the casino that used to be Bally’s, including a world class steak house and poker room! Also, if you have New Year’s Eve plans for Las Vegas, you may want to check our list of events before heading out!

For months now we’ve been telling you that Bally’s Las Vegas would soon be rebranded into the iconic Horseshoe Las Vegas at some point before the end of this year!  And now, here we are smack dab in the middle of damn December, so… where are we on this whole Horseshoe opening thing? When we were there in October, we showed you that the Bally’s name had already been removed from the outside of the buildings and that construction crews were busy tearing down the big old Bally’s sign on Las Vegas Boulevard.

Now, Caesars has released an artistic rendering of what the new Las Vegas Horseshoe will look like… once all the paint dries and the new name is in place. But while we wait for an official announcement, we’ve seen the launch of the new Jack Binion Steakhouse, named for the owner of the original Horseshoe Casino down on Fremont Street. It has an 1800 degree double broiler for steaks cooked to perfection!

There’s also the redesigned WSOP Hall of Fame Poker Room, with all the Horseshoe branding now in place. Open with 19 tables, cash games, and running daily tournaments. So, once the carpets are all in and the new signs are all up, Caesars should be making an official announcement any day that the Las Vegas Horseshoe has arrived!

Now, unofficially, I did speak with the representative from Caesar’s Entertainment just before I filmed this show. And they told me that, officially, Caesars should be making an announcement about the opening of The Horseshoe by December 15th. And literally, as I was scripting this show, I noticed that Bally’s was changing the name of all their social media accounts to… The Horseshoe!

Of course, if you plan to be in Las Vegas for New Year’s Eve, either at the Horseshoe or somewhere else, you may want to check out our list of some of the festivities and fireworks schedules. And there’s a lot of them! On our website we have a listing of the parties from Caesars to the Cosmo… and from Resorts World down to Mandalay Bay! There will also be concerts from Bruno Mars, Gwen Stefani, The Chainsmokers, Tenacious D, and Adele, of course! Also, the comedy of Kevin Hart if that’s more your style. We also have a link to find the complete listing of Las Vegas events to help you ring in 2023!

So now, we’re going to have a New Year and a new Horseshoe Las Vegas! Of course, this means that all that video footage that I’ve been filming in front of Bally’s over the years is now no good! So, I guess I’m gonna have to go back to Las Vegas and film a lot in front of the Horseshoe! Oh, the sacrifices I make for you people!

Before we start our Christmas break, we do have two new holiday game reviews to share with you, starting with the Stay Frosty online slot! A five reel game with 100 paylines from BetSoft! The reels are filled with stockings, presents, snow globes, and Santa himself! Plus, there’s a bonus round, free spins, scatter symbols, and those Frosty snowmen  who act as sticky Wilds!

Next up, we have Plenty of Presents from Microgaming! A five real game with three rows and 10 pay lines! Festive lights surround these reels filled with Christmas symbols! Santa randomly drops in to spread Free Spin Scatter Symbols, and players can buy up to 30 Free Spins! Both of these game reviews are live right now on our YouTube channel!

And finally this week, I just wanted to take a moment here at the end of the program and tell you all, from the bottom of my heart… I’m through. I’m done. I mean, at least for this year! I’m taking the rest of 2022 off, and if I survive the holidays, I’ll see you again January 3rd 2023!  Until then, Merry Christmas! Happy Hanukkah! Happy New Year! Check your shitters! Where’s the Tylenol?

Check out the artistic rendering of the new Horseshoe Las Vegas exterior at this link.