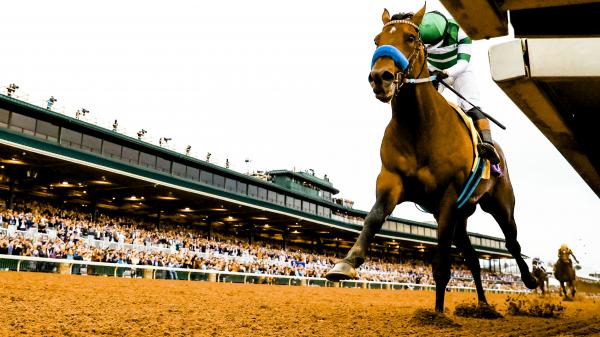 The remarkable, two-year racing journey of Flightline has come to an end.

On Nov. 6, the day after winning the Longines Breeders’ Cup Classic at Keeneland Race Course, his connections announced his widely anticipated retirement to Lane’s End Farm in Versailles, Ky., where he will enter stud next year. His stud fee will be announced later.

“We would like to thank trainer John Sadler and his team for the incredible work they did with Flightline,” Lane’s End’s Bill Farish said. “His historic performances are a credit to their expertise and unwavering efforts to bring out the very best in the horse.”

All of his victories came by margins of six lengths or more, including the Classic, which he took by 8 1/4 lengths over Olympiad — the largest margin of victory in the race’s history. His largest blowout was a 19 1/4-length romp in the Pacific Classic.

“He’s got to be up there with the best of all time,” Farish said at Keeneland Sunday morning. “To have the pedigree and looks he has on top of it is amazing.”

Through the Lane’s End-affiliated partnership Woodford Racing, Farish is among the owners in Flightline, along with West Point Thoroughbreds, Siena Farm, Summer Wind Equine, and Hronis Racing, with the latter holding the largest stake in ownership.

West Point Thoroughbreds purchased the colt for $1 million in 2019 from the Lane’s End consignment at The Saratoga Sale, Fasig-Tipton’s select yearling sale in Saratoga Springs, N.Y., and the ownership partnership was quickly established.

Kosta Hronis of Hronis Racing credited trainer Sadler and his assistant trainer and exercise rider Juan Leyva for their patience and training of Flightline, who initially was keen in his training.

“He wanted to go full blast all the time, and that’s kind of hard to do if you’re going to run a mile and a quarter,” he said outside Flightline’s barn at Keeneland. “They had to teach him how to be a racehorse, and that’s what Juan and John did. It took a lot of work, and they put in all the groundwork and hours to get that done.”

Flightline never raced at age 2, and competed just three times at both 3 and 4, in part due to minor setbacks, but also due to Sadler’s desire to space his races. Despite predictions by some pundits that the blazing-fast colt would “bounce,” meaning regression, he was brilliant from start to finish over his short career.

“John got into a rhythm with this horse early on,” Farish said Sunday morning. “People will say, ‘Oh he didn’t run much. His races were so spaced out.’ But if you looked at his work tab, he probably has more works than any horse with that number of starts on record.”

Farish declined Sunday morning to estimate how valuable Flightline is, though a ballpark could be established Nov. 7 when Keeneland auctions a 2.5% fractional interest in Flightline.

“We’ll find out what one share is worth tomorrow, but I don’t think it would be fair to say it would be worth 40 times that because of the scarcity value of just one share being available,” Farish said.

Though Sadler ran 2018 Classic winner Accelerate in the Pegasus World Cup Invitational Stakes in January 2019 at Gulfstream Park, where he finished third in a final planned outing before standing the 2019 breeding season at Lane’s End, the Pegasus is not in the cards for Flightline.

“Who runs against him?” Farish asked rhetorically, suggesting the connections of opposing horses would be reluctant to want to run against Flightline.

Flightline is out of Jane Lyon’s Feathered, a daughter of Indian Charlie who won the Grade 3 Edgewood Stakes at Churchill Downs and finished second in both the Grade 1 American Oaks and Grade 1 Starlet Stakes and third in the Grade 1 Frizette Stakes. She is from a strong Phipps family, the third dam being the Matron and Acorn Stakes winner Finder’s Fee, and the fourth dam the Grade 1-winning and multiple Grade 1-placed Fantastic Find.