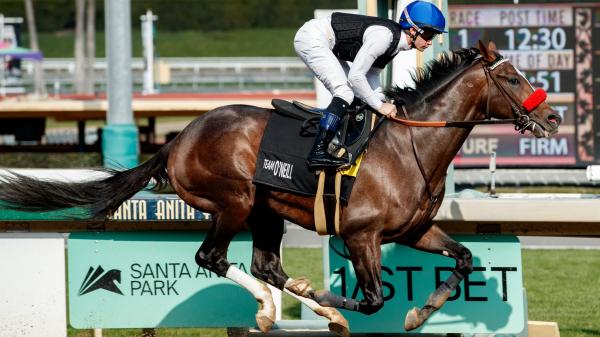 The June 11 victory by Flightline in the Hill ‘n’ Dale Metropolitan Handicap displayed the sizzle in the older dirt male ranks.

A week later, the $150,000, Grade 3 Salvator Mile Stakes at Monmouth Park June 18  will serve as a reminder of the depth and talent in the division.

Grade 1-winning, $5.1 million earner Hot Rod Charlie will make his first start since finishing second overseas in the Dubai World Cup Presented by Emirates Airline when he heads a field of seven older runners in the one-mile test at the Jersey Shore.

“We intentionally gave him time off after Dubai and he’s come back really strong and we have the Breeders’ Cup Classic circled as our ultimate goal. Saturday is the first step toward getting there,” trainer Doug O’Neill said.

Owned by Boat Racing, Gainesway Stable, Roadrunner Racing, and William Strauss, the 4-year-old son of Oxbow has been a gem of consistency in a wide array of the sport’s premier races since his juvenile campaign. Winner of the Pennsylvania Derby last year, his list of runner-up finishes includes the 2021 Kentucky Derby Presented by Woodford Reserve through the disqualification of Medina Spirit, the 2021 Belmont Stakes Presented by NYRA Bets, and the 2020 TVG Breeders’ Cup Juvenile Presented by Thoroughbred Aftercare Alliance. Hot Rod Charlie also crossed the finish line first in the Grade 1 TVG.com Haskell Stakes last summer at Monmouth Park but was disqualified and placed last of seven for interference in the stretch that caused a rival to toss his jockey.

Last time out in the $12 million Dubai World Cup, Hot Rod Charlie finished 1 ¾ lengths behind fellow American-based racehorse Country Grammer, and though he’s been inactive since that March 26 race, he is still fifth in the current National Thoroughbred Racing Association Top 10 poll.

While a trip to the Middle East has been draining on some horses in the past, O’Neill has seen no signs of fatigue in the colt’s recent training.

“The way they have the yard set up there in Dubai it’s like a working vacation for a lot of the horses. It’s so pristine and spacious. They let down well while they are there and as long as they come back injury free they look great and are fresh mentally and physically when they get back,” O’Neill said. “It’s been a great experience for us in the past and ‘Hot Rod’ is no different. He came back in great shape.”

In choosing a comeback race for the produce of the Indian Charlie mare Indian Miss, O’Neill was swayed by the timing of the Salvator and the prospect of an easier assignment than the July 2 Stephen Foster Stakes at Churchill Downs.

“His last few works have told us he’s ready to get back to the races and looking at the calendar the Salvator fits perfect. I like the mile angle and that he’s shipped to Monmouth before and has liked it,” O’Neill said. “The Salvator won’t be an easy race but it will be a little bit less than the Stephen Foster at this point and will give him a good prep that we can build off.”

While O’Neill has not settled on the next stop for his classy 4-year-old, two attractive choices are either the Aug. 6 Whitney Stakes at Saratoga Race Course or the Sept. 3 TVG Pacific Classic at Del Mar.

“You will have to have your running shoes on and have a very talented equine athlete to even think about either the Pacific Classic or the Whitney and we’re hoping the Salvator Mile will tell us we’re in that mix,” he said. “I’m excited to see how things progress.”

With regular jockey Flavien Prat committed to ride in New York Saturday, Mike Smith will fly in from California for the mount.

The Salvator will also bring the 6-year-old Mind Control full circle in a career that has spanned 25 starts. The son of Stay Thirsty broke his maiden at Monmouth on Aug. 12, 2018 and since then has captured a pair of Grade 1 wins while earning $1,471,279 for the ownership group of Red Oak and Sol Kumin’s Madaket Stables.

The field also includes Charles Fipke’s Shirl’s Speight, a Speightstown 5-year-old who won the Maker’s Mark Mile Stakes on turf two starts ago. Trained by Roger Attfield, he has raced only once on dirt, finishing fifth in a six-furlong allowance optional claimer last year at Gulfstream Park.