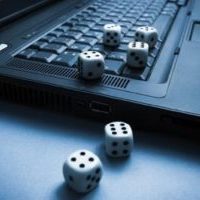 Illegal Online Gambling in America • This Week in Gambling

Hello friends! And welcome to This Week in Illegal Online Gambling! At least, that’s what all the news is about, so that’s what we’re going to be talking about. But we begin with this week’s big story, as the hot , as streak for Las Vegas and the state of Nevada continued in the month of October, and they once again brought in over a billion dollars in gambling revenue. That marked the 20th consecutive month that they’ve generated over a billion dollars in revenue. But according to our friends at the American Gaming Association, that’s just a drop in the bucket!

A new report from the AGA says that over $500 billion a year… that’s half a trillion dollars… is bet on illegal black market gambling in this country. That includes everything from your corner bookie to your back room gambling den. And especially illegal online gambling sites. That 500 billion dollars a year translates to about $4.5 billion a year in lost tax revenue that should be going to the states. Instead, it’s mostly going offshore to these illegal online gambling operators. So now, that billion dollar month for Nevada doesn’t seem quite so impressive.

We recently interviewed the AGA about black market gambling in America, which was published to our YouTube channel. We speak to Chris Cylke, their Senior Vice President of Government Relations, about illegal online gambling, as well as those backroom gambling halls and local sports betting bookies. The AGA states that most of that $500 billion lost to illegal gambling every year goes offshore, for about $340 billion a year, making the unregulated online gambling market worth three times as much money as the regulated American market.

Now certainly, not every offshore gambling site is run by someone who’s dishonest. In fact, many sites that are unregulated in this country are in fact regulated in other countries. But understand this: most reputable regulated online gambling sites in other countries won’t take an American players! Now I seriously doubt that any person in America would ever be prosecuted for playing at one of these illegal online gambling websites. However, while it may not be too terribly difficult to get your money in to one of those websites, getting it out again may be considerably more difficult!

Even honest reputable online casino operators who are regulated in another country may find it difficult to impossible to send an American any money! Banks, credit cards, and wallets like PayPal just don’t work with them. And if the site you’re playing at is not so honest, and not so regulated, well that’s a whole other story. Believe it or not, some of these illegal online gambling websites are not run by the nicest of people. If you win big, they might not pay you. If you request a withdrawal, they might not send it to you. Believe me, having worked in this industry for over 20 years, I’ve seen it happen! And guess what? Because they’re unregulated and offshore, there’s not a damn thing you can do about it.

As we head toward the Christmas holidays we have a brand new game review to share with you for the Book of Mrs Claus online slot, a five reel, three row, 10 payline game from our friends at Microgaming! There are wild symbols, a bonus round, and the Hyperspins feature where players can re-spin individual reels for the price listed at the bottom! And the Book of Mrs Claus symbol acts as a scatter, unlocking up to 25 bonus spins! You can find this game review, along with hundreds more, on our YouTube channel.

And finally this week, for those of you interested in the new Dream Hotel in Las Vegas you might want to know they just got bought out, before they even opened, by the Hyatt Corporation! And it wasn’t just the Dream Hotel in Las Vegas. Hyatt purchased the entire Dream Hotel Hotel Group! Now Dream Las Vegas is still moving forward slated to open early in 2025. If you’d like to drive by and take a look at the place, it’s located on the south end of The Strip near the Welcome to Las Vegas sign.