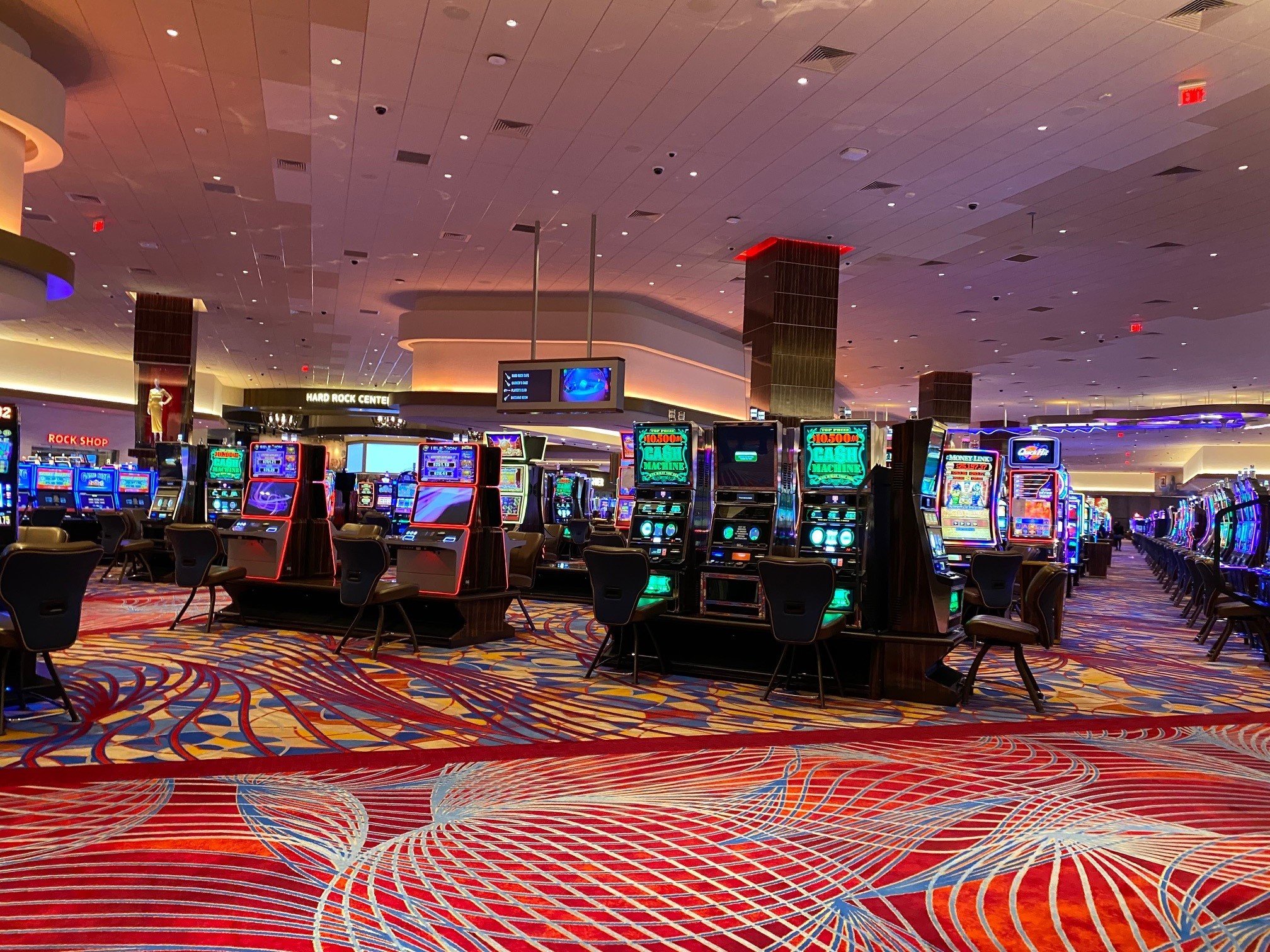 The final totals are in for Indiana gaming in 2021, and sportsbooks had plenty of reasons to celebrate.

The gaming floor at Hard Rock Northern Indiana in Gary just before it opened in May. According to the Indiana Gaming Commission, the state’s newest casino has posted the highest adjusted gaming revenue figures for the past three months, including $31.2 million in December. (Image: Indiana Lt. Gov. Suzanne Crouch/Twitter)

In the second full calendar year of sports betting, and a year that more closely resembled the traditional sports calendar, Indiana’s sportsbooks and mobile apps accepted $3.8 billion in wagers. That’s according to the monthly data reports posted by the Indiana Gaming Commission (IGC).

The sportsbooks won $306 million off those wagers, and the state of Indiana received nearly $29.1 million in tax revenue off the gross receipts.

A very strong fourth quarter helped buoy the sports betting numbers, especially the handle. In all three months, the monthly handle exceeded $460 million and was topped by a record-setting $463.7 million handle in November.

December’s handle could not top November, but it came close. The IGC reported a monthly handle of $463 million. Still, it marks the second-highest handle the state’s recorded.

Sportsbook revenues, however, plunged from $47.7 million in November to $25.8 million in December. Comparatively, the state’s share dropped precipitously as well, from $4.5 million to $2.4 million.

From a sports perspective, basketball edged out football from a handle-by-sport perspective, $148.5 million to $141.8 million. That’s likely due to the fact there were fewer college football games during the month.

Neither sports total includes parlays, which the IGC breaks out separately. The IGC reported $117.3 million in parlay bets for December.

Online apps dominated once again, with DraftKings posting the largest handle at $148.2 million. FanDuel finished second at $120.5 million, but FanDuel did report higher revenues. It took in $7.5 million in winnings, compared to DraftKings’ $6.4 million.

Caesars, with its combination of brick-and-mortar sportsbooks and its app, reported a combined handle of $65.7 million and winnings of $2.7 million. BetMGM won $3.6 million of the $49.9 million it took in bets.

Indiana’s casinos reported adjusted gaming revenues (AGR) of $2.33 billion for the 2021 calendar year, based on the IGC’s monthly reports. The data shows a strong second half of the year, which coincided with the state ending several COVID-19 restrictions.

Horseshoe Hammond reported the highest yearly total AGR at $390.7 million. However, the Caesars Entertainment-owned casino and the Hoosier casino closest to the Illinois state line will likely have stiff competition for that title next year.

That’s because the state’s newest casino, Hard Rock Northern Indiana, has reported higher monthly AGR totals for each of the past three months. In December, the Gary casino, reported revenues of $31.2 million, compared to Horseshoe’s $29.8 million.

The additional gaming revenue means additional tax money for the state as well. Indiana received nearly $53.7 million in wagering taxes for December. Wagering taxes are assessed on a graduated scale based on revenues generated during the fiscal (July-June) year.

For the 2021 calendar year, Indiana’s casinos and racinos generated $576.8 million in wagering taxes.

Indiana also assesses a supplemental tax on all of its casinos except for its two racinos, Indiana Grand and Harrah’s Hoosier Park, and the French Lick Resort. That tax, assessed at $3 per person entering a casino, generated $4.3 million in December. The supplemental tax is divided evenly between the state, the casino’s host city, and its host county.

The casinos generated supplemental tax revenues of $49 million for the 2021 calendar year.