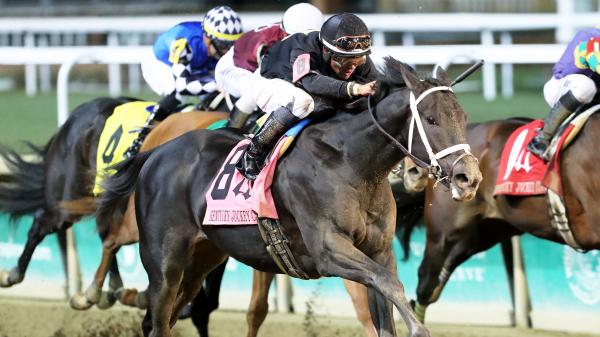 Under the hot hand of jockey Luis Saez, Gold Square’s Instant Coffee circled a field of juveniles Nov. 26 to secure a 1 1/4-length victory over Curly Jack in the Grade 2 $399,365 Kentucky Jockey Club Stakes at Churchill Downs.

The victory provided Saez with his sixth victory on the 12-race card beneath the twin spires, just one off a record of seven wins on a card shared by Pat Day and Julien Leparoux. Saez became the 12th rider to win six races on a program there, which left him with a sizable lead in the fall meet riding standings heading into Churchill’s closing day, Nov. 27.

“Today was a great day. Beautiful day – we win a lot of races,” Saez told FanDuel TV.  “Everything has come perfect for us. So I’m pretty grateful.”

Instant Coffee, like his rider, performed at a high-level Saturday.  In just the third start of his career – which followed a debut win at Saratoga Race Course this summer and a fourth in the Grade 1 Claiborne Breeders’ Futurity at Keeneland last month—he showed a finishing kick from that suggests a bright future.

Seventh as the nine-horse field entered the backstretch of the two-turn race, the winner settled fourth lengths off an opening quarter mile of :24.76 set by Gigante. He then inched closer off dawdling splits of :50 and 1:15.02, gathering momentum as Cyclone Mischief briefly poked his head in front leaving the final turn. But under urging from Saez, Instant Coffee wore down the opposition while racing wide.

“He broke a little bit slow today, so we got behind the pace,” Saez said. “I was a little worried because they weren’t really going fast at all up front and I was pretty wide. I could tell around the far turn my horse was trying very hard, and I was very confident in him. We were able to make a big run into the lane, and he kept finding more. He’s a young horse who’s just getting started and figuring things out.”

Curly Jack battled from behind a wall of horses to grab the place, a head in front of show finisher Hayes Strike, who closed fast to nip Red Route One in fourth. Another nose behind, just 1 1/2 lengths behind the winner, was Denington in fifth.

“I had nowhere to go,” said Curly Jack’s jockey, Edgar Morales. “So I just had to wait for something to open, and when it did, he came back to (Instant Coffee), but it was too late.”

The way Instant Coffee kicked on down the stretch left his connections encouraged for his ability to handle longer races, both on the Road to the Kentucky Derby, and potentially in the 1 1/4-mile classic on the first Saturday in May.

“This is one of the biggest reasons why we do this—to be on the Road to the Kentucky Derby,” trainer Brad Cox said. “We’re extremely proud of this colt to win like that in just his third start. He really does whatever you ask of him in the morning. It was a pretty slow pace, but Luis kept after him and he was able to keep grinding out the win.”

The Kentucky Jockey Club provided qualifying points toward the 2023 Kentucky Derby Presented by Woodford Reserve on a 10-4-3-2-1 basis. Having already picked up two points in the Breeders’ Futurity, Instant Coffee now has a total of 12. Churchill Downs officials use qualifying points as a preference system when the Derby draws beyond its 20-horse maximum field size.

The winner was clocked in 1:45.25 for the distance, much slower than the 1:43.94 time from Hoosier Philly a race earlier in her five-length romp the Grade 2 Golden Rod Stakes for 2-year-old fillies. He paid $5.08 for a win wager as the favorite.

The promising 2-year-old filly Hoosier Philly stamped herself as a divisional leader and tantalizing prospect for the 2023 Longines Kentucky Oaks as she easily won Saturday’s Grade 2 $400,000 Golden Rod Stakes at Churchill Downs with overwhelming authority by five lengths.

“I’ve said multiple times, and I hope it doesn’t come across as arrogant, I’ve never seen any horse like her,” said Amoss, who trained the sensational Serengeti Empress that won the 2019 Longines Kentucky Oaks and banked more than $2.1 million between 2018-20. “I’ve been training since 1987 and she’s different than anything I’ve ever had come in my barn. The instructions to Edgar were pretty simple, he was on the best horse and ride her with confidence.

“Now, she’ll get a break by design and will bring her back as a 3-year-old,” Amoss. “She’s a filly but I have entertained the thought of putting her on the Road to the Kentucky Derby.”

Her final time was :01.31 faster than Instant Coffee’s victory in the $400,000 Kentucky Jockey Club (GII) for colts one race later.

“She’s unbelievable,” Morales said. “I had so much horse the entire race. I got behind horses a little bit going into the first turn but kept her outside and she was moving so easily. It’s so much fun to ride her and so easy, too. She knows exactly what to do and when to do it.”

Knockyoursocksoff was the “winner” of the separate race for second, prevailing by a neck over Pretty Mischievous.