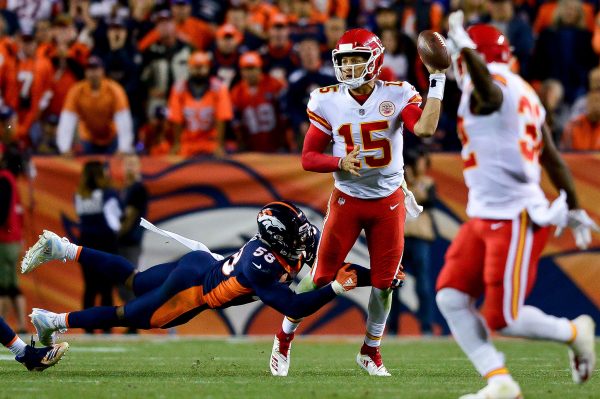 The Kansas City Chiefs travel to Denver Sunday afternoon, opposing the blithering Broncos in what’s taken to be a mismatch. The 9-3 Chiefs attempt to widen their AFC West lead, while 3-9 Denver attempts just to score some points. It’s the Chiefs’ league-best 29.2 points per game against the Broncos’ league-worst 13.8 ppg, with KC having won the last 13 games between the teams. Any wonder the Chiefs are 10-point faves on the road (total at 43), as per NFL odds?

The Kansas City Chiefs are looking to win a seventh consecutive title in the AFC West. There’s no reason to wager against it. Priced at +450, the team is second choice (behind the Buffalo Bills) to win the title, according to Super Bowl odds.

Quarterback Patrick Mahomes is once again having an MVP-level season. He is currently favored (+125) to win the award. Mahomes leads the NFL with 3,808 passing yards, 30 touchdowns and a quarterback rating of 78½.

However, weakness and kryptonite returned to bite Mahomes and the Chiefs last week.

They lost, 27-24, to the Bengals in Cincinnati, their third straight defeat to Cincy. Thus, Denver has a lot of tape to watch to see what it can hope to learn. It will take a lot to see the Chiefs lose back-to-back games, and Denver certainly isn’t Cincinnati.

Despite the hiccup, KC’s still one of the best, if not the best, teams in the league (see the five-game win streak prior to Cincy). Getting dormant Denver should return the Chiefs to the right frame of mind.

Kansas City has a relatively favorable schedule the rest of the way, including with the Broncos twice and a game next Sunday in Houston against the league-worst Texans.

It’s low-hanging fruit to bet on the Chiefs winning the West, provided there’s even such a wager.

The Denver Broncos are out to snap a four-game losing skid, with no loss as ugly as the 10-9 setback to the Ravens in Baltimore last Sunday. That was a game where Ravens’ quarterback went down early (injured knee), but that gift was not sufficient to get Denver over the hump.

The abysmal offense has not scored at least 20 points in eight consecutive games. In order to hang with the guests, Denver may need that number by halftime.

What’s been keeping Denver competitive is its defense, currently surrendering just 17 points per game. That’s second in the league, just behind the San Francisco 49ers’ 15.8 ppg.

Denver, last in the AFC West, has a lot of decisions to make in the offseason. With quarterback Russell Wilson having a godawful season, buyer’s remorse reigns over the Rockies.

Wilson will have to have a bounce-back season in 2023 (it can’t get any worse there). He is returning, though no one’s saying the same about (one-and-done?) coach Nathaniel Hackett.

The Kansas City Chiefs have owned the Denver Broncos over the last seven seasons, more than Aaron Rodgers has owned the Chicago Bears.

Kansas City has a 13-game win streak against the Broncos, who no longer can be considered rivals, since both sides in a rivalry have to win. Denver hasn’t defeated the Chiefs since 2015, when they had Peyton Manning at quarterback and Patrick Mahomes had yet to torture them.

Kansas City is a heavy moneyline favorite, priced at -430, while the Broncos are listed at +335.

Mahomes isn’t going to lose to this version of the Broncos team, as bad as the franchise has had in recent seasons. Lay the points at even-money.

Do not expect the Broncos to score much in here (surprise). KC will likely beat Denver with ease, but won’t combine with Denver to cover the total, Go under at -110.