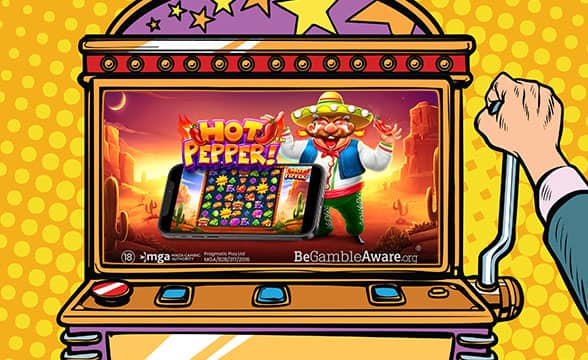 Leading game developer and provider of player favorites to the most popular brands in the industry Pragmatic Play has released Hot Pepper, a fresh 7×7 slot with cluster wins, free spins, multipliers, and a Mexican-inspired theme in place. The new game joins similar titles released by the studio with equally interesting cluster mechanics and wild symbols working in conjunction. The list included games like Wild Beach Party and Fruit Party 2. Let’s see what Hot Pepper has to bring to the table!

The game is set across a grid counting seven rows and seven lines packed with symbols of Mexican origins such as piñatas, limes, and tacos. The sandy location in the desert in the hot and dry region of the planet is framed by a large wooden frame and it is packed with lizards, cacti, plants, and rocky cliffs. The game comes with an upbeat soundtrack while the happy character wearing a sombrero is seen animating the reels.

Players who manage to generate a cluster with a minimum of five adjacent symbols win. These winning icons are removed from the grid to make room for fresh symbols that will replace them by tumbling in from the top.

All winning clusters generate a pepper wild. The wild symbol replaces the rest of the symbols and simplifies players’ attempts to scoop up more wins created at the end of each new tumble. The wild symbols may also come with a multiplier. Its size will grow according to the number of symbols that originally formed the cluster as well as the number of subsequent tumbles. The multiplier can go as high as 128x.

To grab 12 free spins, players must land at least three bonus symbols. All generated wilds created during the Free Spins round start at the maximum level. This means they will carry a minimum 16x multiplier and rapidly reach 128x. The number of symbols creating the winning cluster will determine the size of the multiplier.

Pragmatic Play’s chief operating officer Irina Cornides spoke about the new release, describing it as a game that “puts player engagement and enjoyment at its heart” by building upon the provider’s already popular features while inserting “upgrading wilds and a fun Mexican theme”. The studio releases several new slots a month and also hosts Bingo and Live Casino options in its multi-product portfolio of games. The studio recently followed other exciting slots like Bigger Bass Blizzard Christmas Catch and Reel banks. At the beginning of December, Pragmatic Play announced signing a partnership deal with Azerion’s brand Whow Games, agreeing to inject its slots portfolio into the top social game operators in Germany while consolidating its reach and presence in the country.