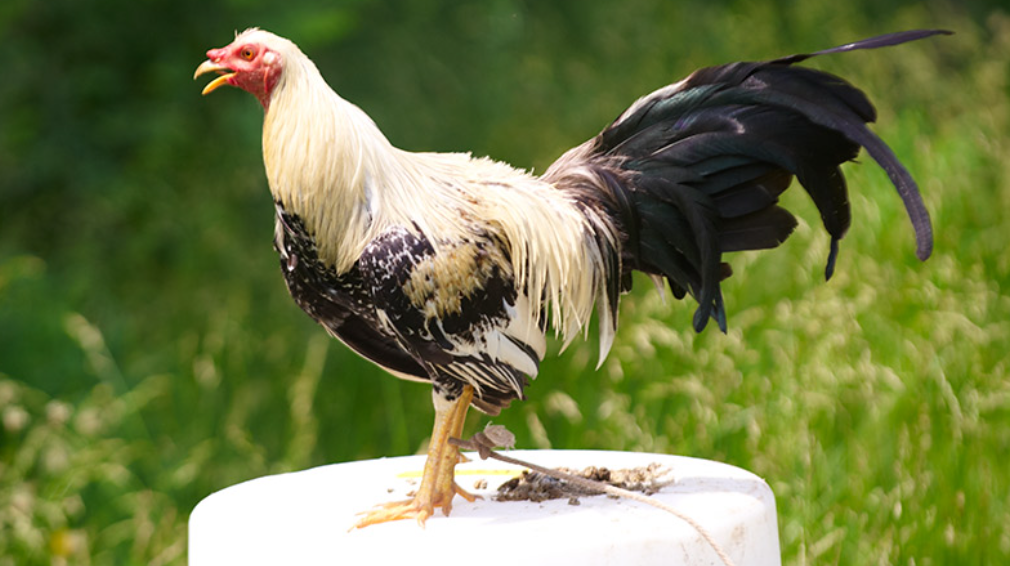 Seventeen Kentuckians face federal charges of animal cruelty tied to cockfighting after being indicted by a grand jury. That’s according to the US Attorney’s Office for the Eastern District of Kentucky, which announced the cases on Wednesday.

A bird tied to a rope is apparently being trained for cockfighting. Federal authorities in Kentucky announced this week that 17 people had been indicted in connection to four separate cockfighting schemes in the eastern part of the state. (Image: ASPCA)

The charges came through four indictments, each separate. Authorities say they found individuals either planning a cockfighting ring or operating one in various parts of Eastern Kentucky.

The gruesome ritual of animal fighting simply has no place in a civilized society,” said FBI Special Agent in Charge Jodi Cohen, who heads the Louisville office, in a statement. “Animal cruelty, however, is just one criminal aspect surrounding this barbaric activity. Whether it is illegal gambling or the attempted corruption of our public officials, the criminal enterprise surrounding cockfighting operations will not be tolerated.”

Besides the FBI, the US Department of Agriculture, Kentucky State Police and the Indiana Gaming Commission also took part in the cockfighting investigation.

Indictments came down last month but the US Attorney’s Office made them public earlier this week.

In one case, Cruz Alejandro Mercado-Vazquez allegedly offered the Mason County sheriff bribes in excess of $5,000 twice in 2020. The indictment says the 43-year-old tried to establish a cockfighting ring in the county, about 60 miles north of Lexington.

Mercado-Vazquez also faces charges of buying, possessing, and training roosters for fighting purposes. With the bribery counts, he faces up to 10 years in prison and a $250,000 fine.

In London, roughly 130 miles south of Mason County, eight people were indicted by the grand jury in connection with a cockfighting scheme.

A third case stems from an investigation into a ring in Manchester, located about 25 miles east of London. Investigators claim weekly fights took place there from November 2018 to January 2020.

In the final case, the grand jury returned indictments on Walter H. Mitchell, 55; Jerrard McVey, 47; and Linda McVey, 42, on charges of conspiring to sponsor and fight animals at a place called the “Valley,” on the border of Nicholas and Fleming counties, roughly 40 miles north of Lexington.

According to the Appalachian News-Express, some of the individuals charged had worked for sheriff’s offices in Clay and Laurel counties.

The individuals charged in the other three cases all face five years behind bars and a fine of up to $250,000.

While cockfighting takes place across the country and abroad, it does have a long, infamous history in parts of Kentucky. State lawmakers did not pass a law that made involvement in the bloodsport a misdemeanor until 1974.

You can go to liquor stores and find the Fighting Cock brand of Kentucky bourbon that includes an image of a rooster poised to attack.

Congress passed a law 20 years ago that made possessing and shipping birds for cockfights illegal. Five years later, it became a federal felony.

In 2020 Animal Wellness Action issued a scathing report showing the sport remained prevalent in Kentucky. That included individuals who the group claimed bred birds and shipped them for fights across the world.

“We hope that this week’s announcement from the Department of Justice is its first in a series of actions and announcements to unravel this criminal enterprise,” Pacelle said in a statement.

2022-03-04
Previous Post: Macau to Extend Licenses by Six Months Because of Gambling Reforms
Next Post: Davenport Among Chip Leaders After GUKPT Coventry Main Event Day 1a