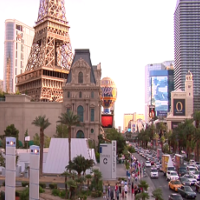 Vegas Revenue Record Continues into January • This Week in Gambling

The threat from the Omicron variant of the Coronavirus did little to slow down the Vegas revenue record streak. Nevada casinos once again took in over $1 billion in the month of January, marking the 11th consecutive month they’ve done so.

A report from the Nevada Gaming Control Board shows that the state won close to $1.1 billion, which was up over 40% from the same time last year. Board members stated that these numbers were a “pleasant surprise” given the spike in Covid cases that took place.

Casinos in Las Vegas were responsible for $928 million of that record total, and Strip casinos specifically accounted for $567 million, or just over 51% of the total. This Vegas revenue record run of consecutive billion dollar months is the reason the state took in an all-time high of $13.4 billion last year.

The good news was not restricted to gambling establishments, as airport officials say monthly passenger traffic is twice as much as last year. But it wasn’t all good, as hotel stays and conference attendance actually fell in January. Still, with March in front of us and the summer months on the horizon, we may just see this Vegas revenue record streak of billion dollar months last a bit longer!