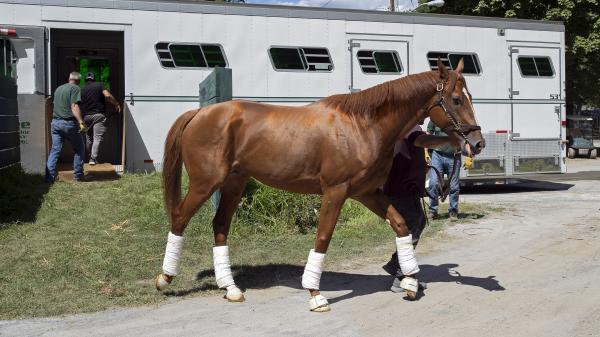 Just after 2 p.m. on Aug. 14, the Kentucky Derby Presented by Woodford Reserve winner arrived at Saratoga Race Course. Rich Strike, the improbable 80-1 winner of the run for the roses, was led off the Sallee horse van and taken to his home for the next two weeks, at the barn of trainer Dale Romans.

Rich Strike will be running in the $1.25 million Runhappy Travers Stakes on Aug. 27.

Rich Strike started his trip to the Spa from trainer Eric Reed’s Mercury Equine Center in Lexington, Ky., at 12:30 a.m. Aug. 14. He was accompanied by Ryan Cook, who was part of Rich Strike’s security team during Kentucky Derby week.

“He’s a good shipper,” said Reed, who drove separately and beat Rich Strike to Saratoga by a couple of hours. “He sleeps right in the box stall.”

Red TR-Racing’s Rich Strike, a son of Keen Ice, is staying in the same barn that his sire lived in in 2015 when he beat Triple Crown winner American Pharoah in the Travers. The Romans barn is also serving as a temporary home for another Travers contender, Ain’t Life Grand, from trainer Kelly Von Hemel.

Reed said he plans on giving Rich Strike his first look at the Saratoga track on Monday and will work him Friday or Saturday.

In the Travers, Rich Strike will likely face the two horses — Epicenter and Zandon — who finished second and third, respectively, in the Derby. Reed isn’t predicting a Travers victory, but is confident Rich Strike will run well.

“I hope he runs well for his fans,” he said. “I know he will. He is always running hardest at the end. If things happen and he gets his trip, he can beat all these horses. He has already shown he can beat them.”—Tim Wilkin