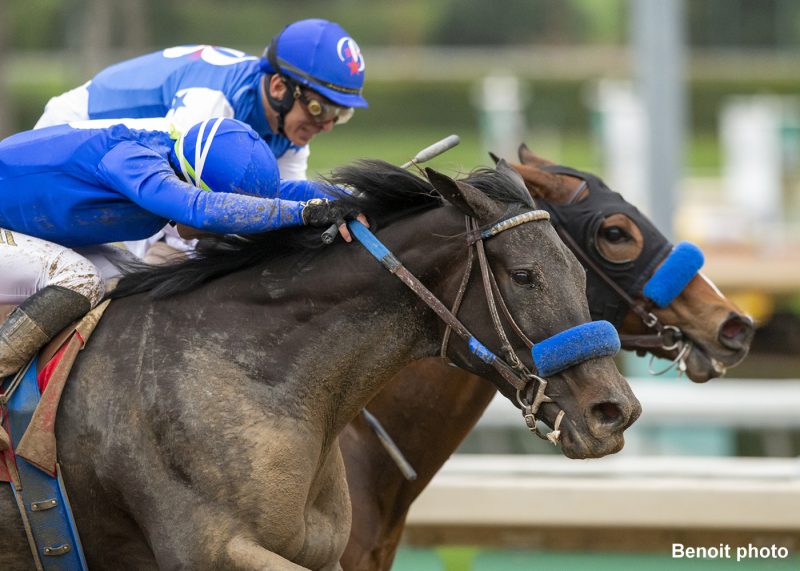 Kirstenbosch, outside, with Kazushi Kimura aboard, edges pacesetting favorite Ganadora at the finish line in the G3 La Canada

Attentive to the pace from her rail post, Kirstenbosch was about 2 ½ lengths off dueling leaders Ganadora and Angel Nadeshiko leaving the quarter pole. Three-deep through the lane, Kirstenbosch appeared to draw even with Ganadora, with John Velasquez aboard, inside the final sixteenth, but victory was very much in doubt as Kimura stayed busy with a powerful hand ride in a thrilling finish.

“It feels so amazing, my first win here and in a Grade 3; it’s amazing,” said Kimura, 23, who was also Woodbine’s leading rider this past season. “She’s always a bit lazy, she always needs like a little bit of pushing. At the half mile last time I rode her in the La Brea ([G1] on Dec. 26), it was a seven-furlong race, and I was just pushing her to the wire. Today, I was more confident to say she would show up better than last time (when she finished third).

“John has given me opportunities since opening day. I’m really happy to win for him and I really appreciate it.”

Second in the Zia Park Oaks two starts back on Nov. 22, Kirstenbosch was off at 3-1 in a field of six older fillies and mares in the La Canada and paid $8.60 for the win.

“He just rode her beautifully, he tried hard until the end,” said Juan Leyva, assistant to Sadler, who watched the race today from London. “He is a really nice kid. I’d like to see him really get going because he is so polite and he’s a good rider too. … Hopefully, this will open up some eyes and he can get a lot more opportunities.

“When she started running, I thought she was going to win by at least half a length, but then it looked like when she got to Ganadora, she kind of just hung with her and this filly just tends to do that. She does just enough to win, she’s never been one to just pull away, so that’s the only thing I was afraid of. … But she got the job done so that’s the main thing. I’m really happy for Keith because they have been long-time clients of John and they are just good people.”

In notching her first stakes win, Kirstenbosch improved her overall race record to 3-3-1 from 10 starts. With the winner’s share of $120,000, the 4-year-old Midnight Lute filly, increased her earnings to $334,480. Bred in Kentucky, she was produced by the Belong to Me mare Llandudno.

For her part, Bob Baffert-trained Ganadora did everything but win, as she was pressed early and late and just missed while finishing 2 ¾ lengths in front of Smoothlikebuttah.

Ridden by Tiago Pereira for Steve Knapp, Smoothlikebuttah rallied from last to pass a tiring Angel Nadeshiko by a half length.

Dating back to Santa Anita’s opening day, Dec. 26, Kimura had been winless with his first 16 mounts through nine racing days.