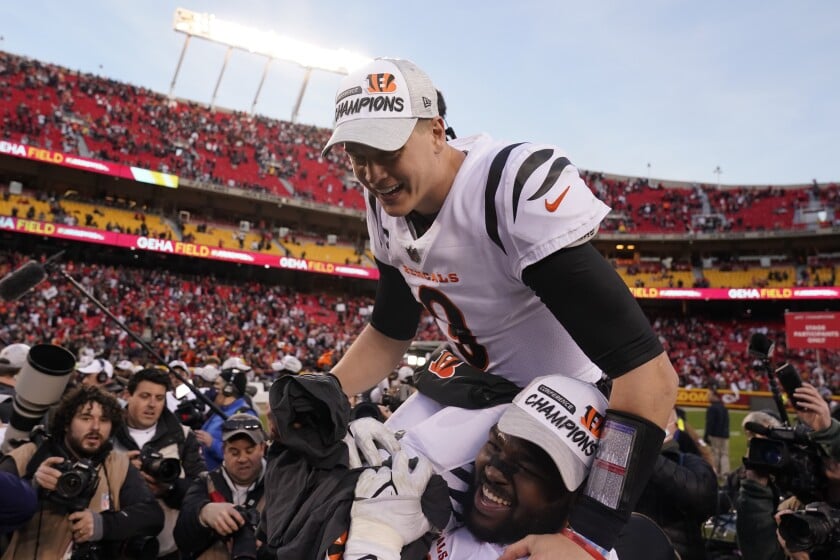 The Cincinnati Bengals have tried to shake off the underdog tag as they’ve advanced to their first Super Bowl in 33 years. However, that’s what they start off as they face the Los Angeles Rams in Super Bowl LVI in two weeks.

Cincinnati Bengals quarterback Joe Burrow gets hoisted on the shoulder of teammate Tyler Shelvin after the Bengals 27-24 overtime win in Sunday’s AFC Championship at Kansas City. With the win, the Bengals advanced to their first Super Bowl since 1989. (Image: Charlie Riedel/Associated Press)

The Rams – the second team in as many years to play on their home field – opened as a 3.5- to 4.5-point favorite over the Bengals just moments after they knocked off the San Francisco 49ers 20-17 in Sunday night’s NFC Championship.

The Bengals advanced thanks to a historic comeback earlier Sunday in the AFC Championship. After trailing by 18 points in the second quarter, Cincinnati stormed back and stunned two-time defending conference champion Kansas City 27-24 in overtime.

Within minutes, most sportsbooks had moved the Rams to a four-point favorite, although BetMGM kept their initial spread of 3.5 points.

The points total ranges from 49.5 to 50 at most books. That means oddsmakers likely expect both offenses to make a decent showing in two weeks.

Why the Rams are Favored

Besides playing on their home turf, part of the reason why the Rams are favorites in some oddsmakers’ eyes is the fact that coach Sean McVay has taken them to the Super Bowl before. in Super Bowl LIII. The Rams lost that game to the Patriots in 2019 by a 13-3 score.

Craig Mucklow, vice president of trading for Caesars Sportsbook, said in a statement that experience, plus moves the team made to acquire such players as quarterback Matthew Stafford, wide receiver Odell Beckham Jr., and linebacker Von Miller, gives the Rams the edge.

“They are all-in this year as they proved by the trades that they made… (T)he Rams’ experience and their defense puts the line at 4,” Mucklow said. “If there is much movement, it would likely be tonight, assuming there no major health issues that would drastically impact the line. It will sell on Monday.”

Caesars took in $180,000 on the Rams moneyline odds in the first two hours after their Sunday night win, Mucklow said.

Last week after the Bengals upset the top-seeded Tennessee Titans in the AFC Divisional Round, Bengals quarterback Joe Burrow said he had grown tired of the “underdog” status his team had been given by oddsmakers and football analysts.

“I’m tired of the underdog narrative,” Burrow told reporters after the Jan. 22 win over the Titans. “We are a really, really good team. We are here to make noise.”

The Bengals certainly made noise on Sunday. They matched the largest comeback in an NFL conference championship game after falling behind 21-3 midway through the second quarter. At one point, Circa Sports had the Bengals at +1800 to win the game, which equals an implied probability of 5.26 percent.

But just as they did earlier in the month against Kansas City, the Bengals mounted a furious second-half rally against the Chiefs, and for the second consecutive week, rookie kicker Evan McPherson scored the game-winning field goal on the game’s final play.

Cincinnati is an improbable Super Bowl team. In the 2020 season, they finished with a 4-11-1 record. Burrow, a rookie last season, ended his first year early due to torn knee ligaments. Before the 2021 season kicked off BetMGM offered +15000 odds on the Bengals to win the Super Bowl. At the SuperBook, their odds were +20000.

Now, they’re one game away from making some bettors a really nice return.

Mucklow said that while Caesars made the Rams the favorites, they won’t write off Burrow because of what he’s shown in the playoffs. He’s expecting bettors to wager on the Bengals moneyline, the Rams on the spread, and the over on the points total.

“So, if the Rams cover and the game goes Over, it’s the public’s Super Bowl,” he said. “We want a close, competitive game. The last thing we want is a blowout because it spoils the in-play. With close games, the market lives longer. People can bet on them as well and everybody’s ticket is alive. It makes it more fun. We would prefer a low-scoring, competitive game.”