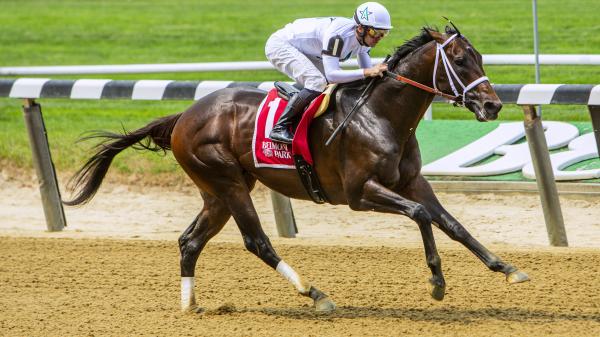 If there was any concern that a trip to the Middle East and a fourth-place finish at 1 1/4 miles would have a negative impact on the brilliant Life Is Good, it was washed away in a shade under one minute and 22 seconds.

Returning to the races for the first time since that March 26 loss in the $12 million Group 1 Dubai World Cup Sponsored by Emirates Airline, Life Is Good was as sharp as ever as he rolled to a decisive victory in the $232,500 Grade 2 John A. Nerud Stakes July 2 at Belmont Park.

“He is just an incredible horse,” WinStar CEO, president, and racing manager Elliott Walden said. “We’re excited to see what happens the rest of the year. It’s nice to see. They couldn’t pull him up (after the race). It doesn’t look like he has limitations. We’ll see as we get into the year, but we’re looking forward to getting him back around two turns.”

That return to two-turn racing will come Aug. 6 when the son of Into Mischief bred by Gary and Mary West figures to be a heavy favorite at Saratoga Race Course in the $1 million Grade 1 Whitney Stakes over a 1 1/8-mile distance. The stretch back out should not pose a problem for him, as evidenced by his victories for trainer Todd Pletcher in the 2021 Grade 1 Big Ass Fans Breeders’ Cup Dirt Mile and then the $2.94 million Grade 1 Pegasus World Cup Invitational Stakes Presented by 1/ST BET at 1 1/8 miles in January.

“We got a little something out of it. Now we get five weeks for the Whitney and we’ll see if we can take another step forward,” Pletcher said. “We’re blessed to have him.”

With just a field of four, the third straight New York Racing Association open stakes with four starters, there was not much suspense surrounding the Nerud. The race was basically a match race between multiple grade 1 winner Life Is Good and the Carter Handicap winner, Godolphin’s homebred Speaker’s Corner, recently third behind the unbeaten Flightline in the Grade 1 Hill ‘n’ Dale Metropolitan Handicap.

Once 1-5 favorite Life Is Good ($2.40) and jockey Flavien Prat quickly grabbed the lead from the rail, little changed from there as Speaker’s Corner pushed Life Is Good but began to drop back after a half-mile.

“I was going to apply some pressure going to the second quarter. I did, but (Life Is Good) was the better horse,” said Jose Ortiz, who rode Speaker’s Corner. “He just couldn’t keep up and ran evenly the whole time.”

While the Bill Mott-trained Speaker’s Corner, the 2-1 second choice, could not outrun Life Is Good, considering the conditions, there was little else Ortiz could do but chase the winner.

Speaker’s Corner, a son of Street Sense, was second by 2 1/2 lengths over Repo Rocks.

Life Is Good, 7-for-9 with earnings of $3,551,700, was purchased for $525,000 by Maverick Racing from the Paramount Sales consignment at the 2019 Keeneland September Yearling Sale. He is the second of five foals and the first stakes winner for Beach Walk, who also has a yearling Candy Ride colt and a full brother to Life Is Good born this year.

“There’s a sense of relief when they are finished,” Pletcher said about the expectations heading into Saturday’s race. “They are not the ones you are jumping up and down and hollering about and waving your program.”