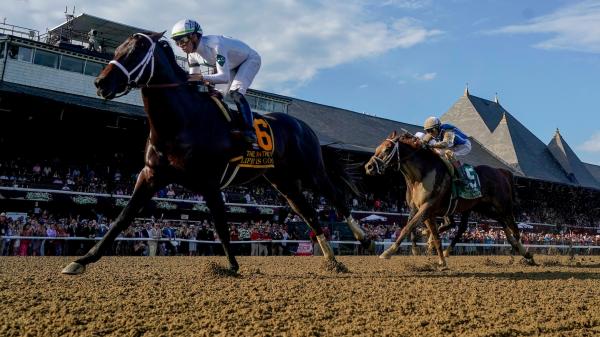 Elliott Walden is not ready to proclaim Life Is Good as the Horse of the Year for 2022.

But it looks like a two-horse race to the wire for championship honors after CHC and WinStar Farm’s Life Is Good motored to a two-length victory in the $1 million Whitney Stakes Aug. 6 at a steamy Saratoga Race Course.

“He’s one of them,” said Walden, the CEO, president and racing manager of WinStar, when asked about who was the best horse in America. “He and Flightline have separated themselves.”

On a day when a crowd of 39,478 turned out at Saratoga and the all-sources handle was $40.2 million, Life Is Good came into Saturday’s test ranked third behind the undefeated Flightline in the latest Longines Breeders’ Cup Classic rankings. While only four rivals faced him in the Whitney, one of them was Olympiad, a winner of four straight graded stakes who was second in the BC Classic poll.

With Life Is Good winning for the eighth time in 10 career starts Saturday and Olympiad fading to fourth, the Whitney added some clarity to the Horse of the Year chase while once again vividly illustrating just how special of a talent trainer Todd Pletcher and the connections have in Life Is Good.

“When God thought about a horse, he thought about Life Is Good because he just flies,” Walden said about the son of Into Mischief who was bred by Gary and Mary West and has earned $4,086,700. “We’re very proud. He showed who he is (today). He’s a special horse. It’s a blessing.”

A winner of both the Big Ass Fans Breeders’ Cup Dirt Mile and the Pegasus World Cup Invitational Stakes Presented by 1/ST BET, Life Is Good’s brilliance has underscored why Teo Ah Khing and the China Horse Club became involved in American racing.

“Since we have been involved in American racing with WinStar, the journey has been very exciting,” said Khing, whose group owned a share of Triple Crown champion Justify. “It actually encourages overseas people who watch American racing to become involved in it through horses like Justify and now Life Is Good.”

While plans for Life Is Good’s next start are yet to be determined, his whereabouts on Nov. 5 became firm as the Whitney victory awarded Life Is Good a free spot in the Longines Breeders’ Cup Classic. The year-end showdown, which could be a battleground for both Life is Good and Flightline, will offer Life Is Good a second crack at a 1 ¼-mile distance after he finished fourth in his first try March 26 in the Dubai World Cup Sponsored by Emirates Airline.

The Dubai World Cup was the lone loss for Life Is Good in his last six starts.

“When you feel like you’re bringing over the best horse, you worry about everything. Today we got the rain, the deep track, the heat and humidity. All those things can be concerning, but he was able to overcome all of that and just show how brilliant he really is,” Pletcher said. “To me (the Whitney) is the premier older horse race in the country outside of the Breeders’ Cup Classic. So, it means a lot.”

The Whitney unfolded much like the Pegasus World Cup as jockey Irad Ortiz Jr. used Life Is Good’s sharp early speed to break from the gate quickly with the 0.85-1 favorite and open a clear lead by the time the field reached the first turn in the 1 1/8-mile test.

After running a half-mile in :46.84 over a good, sealed surface, Life Is Good led by 3 ½ lengths over third betting choice Hot Rod Charlie and the chances of catching him were beginning to slip away. He was still ahead by two lengths after six furlongs in a quick 1:10.93 and while Happy Saver and Hot Rod Charlie took runs at him at the top of the stretch. The 4-year-old moved in while clear in the stretch, but Ortiz had more than enough horse underneath him to hold his challengers off and cross the wire in 1:48.97.

“When we got to the three-quarter pole and along the backside he changed leads and he just took off. Two jumps. He was strong. After that, I didn’t want to fight too much with him and he surprised me today. I just started to let him do his thing. It was a little early but I had just a little hold of him. I can’t fight too much with him,” Ortiz said. “I was clear (in the stretch). I looked and came down a little bit. I know if he felt somebody that he would give me another run and more. I know he’s coming back a little, the track is not that fast, so if he feels somebody, he will fight. I know he will fight, so that is why I was looking.”

Happy Saver, a son of Super Saver trained by Pletcher, took second by a head over Hot Rod Charlie. Hot Road Charlie pushed his earnings to $5,251,200 with his third-place finish.

Olympiad tracked in third and never fired as the 1.85-1 second betting choice. The loss snapped his five-race winning streak for trainer Bill Mott.

“He was moving well, then leaving the five-eighths pole (jockey Junior Alvarado) said he wasn’t giving him what he gave him in the past,” Mott said.