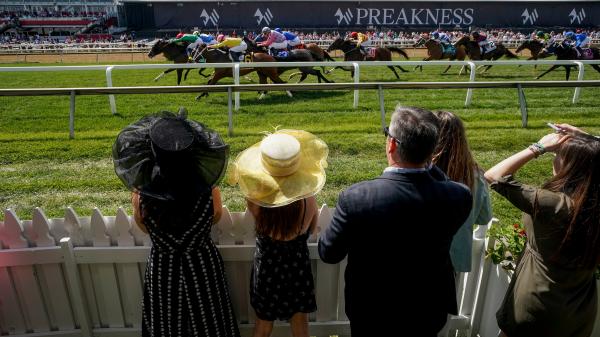 Opportunity knocks for bettors at major racing events because those cards draw the best horses and trainers from across the country combined with elite local runners. That means full fields of talented horses and plenty of live longshots for Preakness Stakes weekend May 20 and 21 at Pimlico Race Course.

So, let’s try to kick the door down with some huge prices and make some money!

NBC Sports will televise the George E. Mitchell Black-Eyed Susan Stakes from Pimlico on Friday, May 20, during a show from 5 – 6 p.m. ET on the USA Network.

The Preakness will be televised live on NBC to culminate a broadcast from 4 p.m. to 7:30 p.m. ET. The show will be hosted by Mike Tirico, with analysis from Randy Moss and Jerry Bailey, handicapping from Eddie Olczyk, and reporting from Donna Barton Brothers, Britney Eurton, and others. Undercard races from Pimlico will be shown on CNBC from 2 p.m. to 4 p.m. ET. For the first time, NBC Sports’ Preakness coverage will also be livestreamed on its Peacock service.

#15 Kentucky Pharoah (10-1): He showed a ton of promise in his 3-year-old debut in January 2021 when he won the Dania Beach Stakes at Gulfstream Park. That came one start after he broke his maiden when switching from dirt to turf for the first time, also at Gulfstream. After the Dania Beach, he finished fifth in a Grade 3 turf stakes at Gulfstream, but the last two starts of 2021 are the reason he should be a good price Friday. He lost his rider at the start in June at Belmont Park and then finished well behind the top turf sprinter in the country (and maybe the world?), Golden Pal, when cutting back to 5 ½ furlongs for the Grade 3 John’s Call Stakes last July at Saratoga. Kentucky Pharoah has not raced since then, but he finds himself in an easier spot for his return and, unlike many of the horses entered in this race, he has some significant upside. So much so that I’m willing to ignore an absolutely brutal post position.

#12 Adelaide Miss (10-1): Trainer Brittany Russell has a terrific record with horses cutting back from two-turn races to sprints (32%), returning from a 61-180-day layoff (30%), and when partnering with red-hot jockey Jevian Toledo (35% in 131 starts). I’m a big fan of the cutback in distance move, especially for turf horses who have shown speed but may be lacking a bit in stamina, like Adelaide Miss. I’m hoping her most recent start, when she finished ninth by 26 ¾ lengths going 1 1/16 miles in February at Fair Grounds, drives bettors away and we get an even better price than her 10-1 morning-line odds.

Note: Russell and Toledo could win the race immediately before this one with another price in #4 La Casa d’Oro (8-1) in the Miss Preakness Stakes. She just missed the cut since I was looking for 10-1 odds or higher.

#4 Workin On a Dream (12-1): I’ll admit to being a bit partial to local runners, and especially on the main track, for the Black-Eyed Susan and Preakness Stakes undercards. Workin On a Dream fits that bill and I think he could get out to a fairly easy early lead and be in front at the top of the stretch with something left in the tank. He put up some big speed figures to close out his 2021 season, he’s run well on the main track at Pimlico, and he should have plenty of foundation in his fourth start of the year. I expect a big race from this 7-year-old Jersey Town gelding at a big price.

#8 Candy Light (20-1): This is a swing-for-the-fences pick, but I really respect trainer Graham Motion and think this might be the better play of his two entrants in this race. She’s bred to handle the distance and has shown that with three very good races in three starts at a mile a since stretching out in December 2021. Candy Light enters off a runner-up finish to fellow Black-Eyed Susan entrant Luna Belle in the Beyond the Wire Stakes and she’ll have nine weeks of rest to recover from a career-best performance. There should be plenty of pace in here, and I expect her to drop back and make one big run into contention. Motion and jockey Charlie Marquez click at 25% and this race looks ripe for an upset. I also like #5 Beguine (12-1) in this race and will try to get one of them home in front and both Beguine and Candy Light into the top three for the trifecta.

#5 Hashtag Lucky (15-1): As the old saying goes, “pace makes the race,” and Hashtag Lucky looks like he’s entered in this spot with the clear intention of going right out to the front and leading this group as far as he can. He has not raced on the grass in quite a while, but he has experience on turf and can be quite brave when allowed to set the pace unchallenged. I’ll try to use him to key exacta and trifecta bets and hope he fires big at a huge price.

#3 Cinnabunny (15-1): Wow, you get some bang for the buck with this 5-year-old mare if the morning-line odds hold! She’s won seven of 14 career starts, enters off a confidence-building stakes win at Parx April 25, and makes her third start of the year following a 5 ½-month layoff. Trainer Cathal Lynch and jockey Jorge Ruiz have won at a 31% clip with 31 starters and I love the fact that Cinnabunny cuts back from seven furlongs to three-quarters of a mile in this spot. My best bet of the day as long as she’s not bet down to half of the morning-line odds.

#6 Chasing Time (12-1): Hall of Fame trainer Steve Asmussen tried Chasing Time on the Triple Crown trail in the Rebel Stakes (fifth) and Arkansas Derby (last of nine) and cuts back to a sprint here with a colt who has never run a bad race around one turn. He has a win, two seconds, and a third (beaten three lengths in his career debut) in four sprint races with speed figures significantly better than what he earned racing around two turns. His connections took a shot on the Derby trail – can’t fault them for that – but now Chasing Time gets back to what he does best. With a couple of poor starts in his most recent two races glaring back at handicappers, you’ll very likely be rewarded in this spot for a trainer who wins at a 27% rate when teaming with Tyler Gaffalione.

#4 The Addison Pour (15-1): I’m going back to the well once more for a price horse from the barn of Brittany Russell with Jevian Toledo lined up to ride. As I mentioned earlier, they win at a terrific percentage (35%) in a significant sample size of 131 races. This stoutly-bred Tonalist gelding has run well at this distance, enters off a win from a stalking position despite a wide trip, and has speed figures that indicate he can compete here. His morning-line odds of 15-1 would be a gift.

#9 Skippylongstocking (20-1): Let’s be honest, this looks like it has every chance to be a formful race and the Preakness frequently is just that. I would imagine some combination of Epicenter, Secret Oath, and Early Voting will make up two-thirds of the trifecta, so I’m really just looking for a price here to potentially spice up the exotics. Skippylongstocking is training well for Saffie Joseph Jr. and enters off a solid third in the Wood Memorial Stakes Presented by Resorts World Casino April 9 at Aqueduct. He’s better than he has even been right now and has a shot to use a stalking trip under Junior Alvarado (30% win rate in 56 starts for Joseph) to crack the top three at 20-1 on the morning line. His sire, Exaggerator, won the Preakness in 2016.