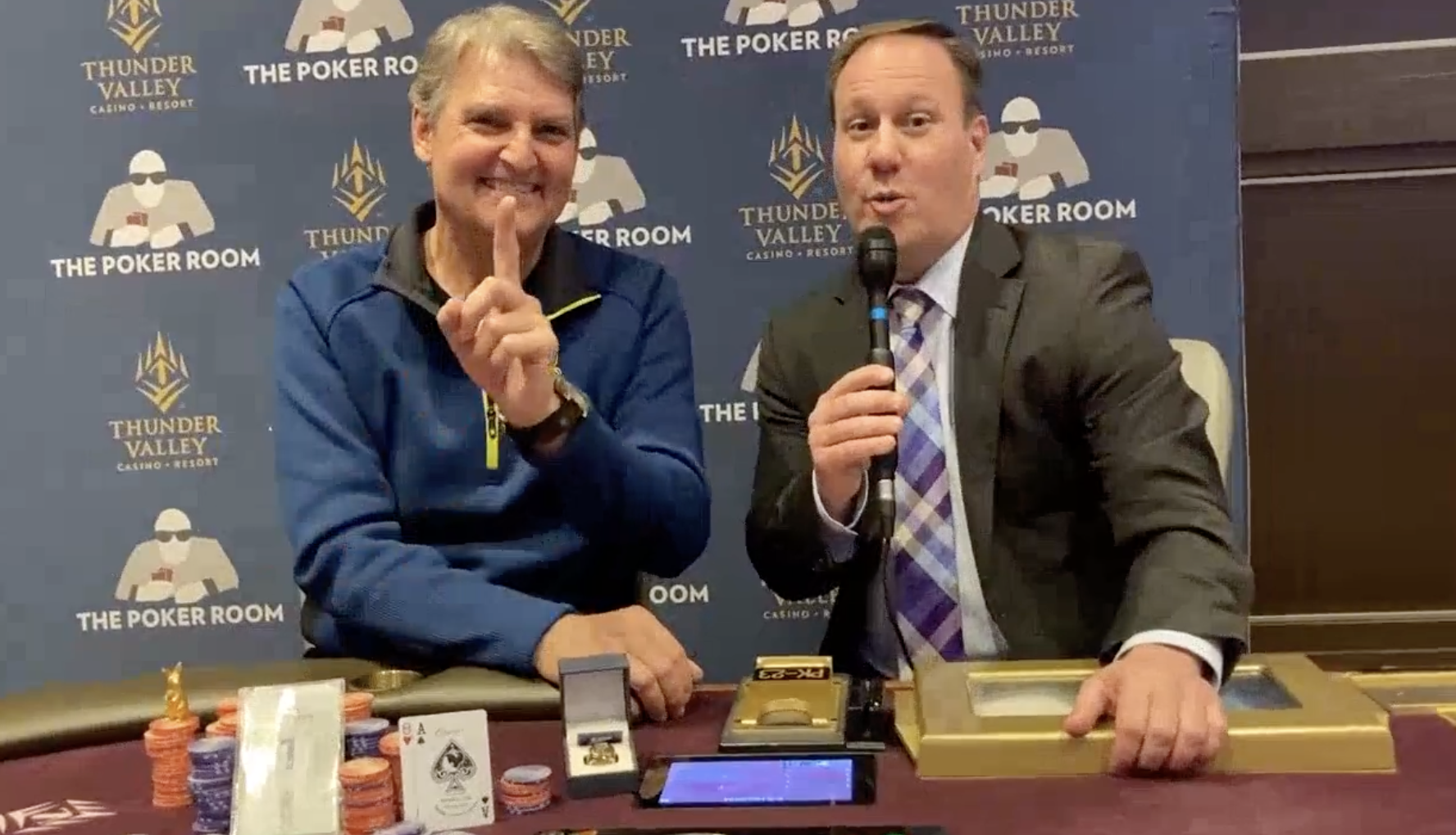 He’s been one of the main voices of the World Series of Poker for the last two decades, and now he’s earned a place in its history on the felt.

Lon McEachern became a WSOP Circuit winner at his home poker room in Thunder Valley Casino. He won $15K and a ring for being the last of 181 standing in yesterday’s $400 Senior event, which is made for players 50 and older.

McEachern, 68, logs in hundreds of hours a year in front of the microphone as half of the long-time WSOP announcing pair, but this is the first time he bagged a win at a WSOP event.

Thunder Valley’s director of Poker Operations Ben Erwin sat down with McEachern after his win (by the way, a Happy Birthday to Erwin).

“You know, Norman Chad doesn’t have one of these,” he told Erwin, needling his bedraggled broadcast partner. “That’s all I need to say.”

Listen in to the postgame interview with @BenErwinPoker

McEachern began the final table fifth in chips with a healthy 25 big blind stack, and told Erwin that the whole day went his way. Although there were several times his stack was at risk, he never had to “come from behind.”

“It felt easy almost,” he said. “The tables were great. The Senior event was such a great atmosphere the whole day. Everyone was laughing at all the tables.”

The WSOP Circuit stop at Thunder Valley began yesterday with the Seniors event and a $400 buy-in no-limit event with a $250K guarantee that continues today.

Leading up to the Circuit series, Thunder Valley’s poker room held its Champagne Series with six events that brought in nice crowds.

Located north of Sacramento, Calif., its 24-table poker room has become a regular stop of the WSOP the last several years.

It’s also a stop on the World Poker Tour, which returns to Thunder Valley with the WPT Rolling Thunder, a $3,200 event from March 31 to April 4.

A “kick-off” series takes place starting March 14, but a full schedule has not been yet released.

It’s also a stop on the Run Good Poker Series (RGPS), which wrapped up its 2022 season at Thunder Valley in December with a $2,500 $1 million  guaranteed event.

That event just cracked its guarantee with 417 entries, and won Brett Murray $172K.

The poker room also has a decent daily poker schedule with events taking place Fridays through Tuesdays. Buy-ins start at $75. Satellites to its larger buy-in tournaments are also held.

The WSOP Circuit event at Thunder Valley runs until Jan. 23. A total of 13 rings will be won in Northern California, highlighted by the $1,700 $500K guaranteed Main Event that starts Jan. 20. A $3,250 high-roller event is scheduled to start the day before.

The Series helps kicks-off a very busy year for the WSOP Circuit.