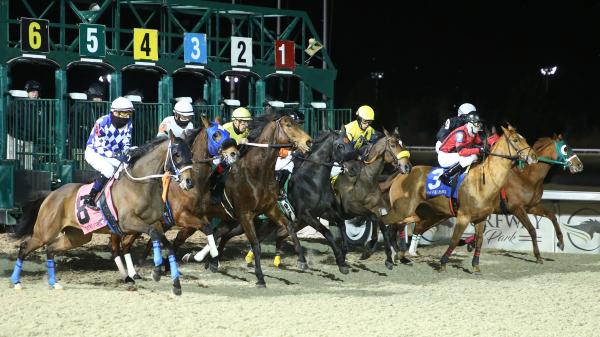 Looking for a Home-Course Advantage in Battaglia Memorial Stakes

The Road to the Kentucky Derby Presented by Woodford Reserve makes its first stop in Kentucky this year on Saturday night, when Turfway Park hosts the $125,000 John Battaglia Memorial Stakes. The race attracted a field of 12, plus two also-eligible entrants. They’ll travel 1 1/16 miles on the synthetic main track in search of Derby qualifying points. The winner will bank 10 points towards a spot in the Derby starting gate.

The Battaglia tends to attract grass horses hoping to sneak their way into the Derby. The synthetic Tapeta track is generally more favorable to grass horses than a conventional dirt surface. The promise of earning Derby points without having to race on dirt has lured the two morning-line favorites, Tiz the Bomb (#10), at 5-2, and Stolen Base (#4), the 7-2 co-second choice. Tiz the Bomb won two stakes races on grass last year, and finished second in the Grade 1 Breeders’ Cup Juvenile Turf. In his first start this year, the Grade 3 Holy Bull Stakes on dirt at Gulfstream Park, he raced wide and was soundly defeated.

Stolen Base has hit the board in stakes company on grass three times in his career. He broke his maiden on dirt at Saratoga last year but has not been on that surface since mid-August. Neither of the favorites have competed on a synthetic track before, which may put them at a disadvantage. Four of the past six Battaglia winners competed at Turfway in their prior start. With the two favorites likely to soak up a lot of dead money, it’ll make the prices on the other contenders much more attractive.

The best of the locals looks like Erase (#8), the fourth choice at 5-1. He won the Leonatus Stakes at Turfway on Jan. 22 in gate-to-wire fashion. His Brisnet figure of 92 is the best last-out figure in the race by three points. He might have a harder time getting to the lead in the Battaglia as he’s drawn toward the middle of the track and there’s some speed horses to his inside. However, his early pace figures are competitive with those of the others, so getting the same kind of trip he did last time is certainly a possibility.

Two other local horses look interesting at potentially big prices. On Thin Ice (#5) and Legendary Lore (#6) are both 15-1 on the morning line, and are both coming off strong performances. On Thin Ice, trained by Mark Casse, made his synthetic debut in the Grade 3 Grey Stakes at Woodbine last November, and closed well for third off a slow pace despite a wide trip. In a first-level allowance optional claiming race at Turfway on Jan. 7, he once again made a game rally and finished second, beaten just a neck by Tawny Port, who then ran fifth in the Risen Star Stakes Presented by Lamarque Ford on dirt at Fair Grounds. Those races suggest that, at the least, On Thin Ice can close and get a piece of the exacta or trifecta at a decent price.

Legendary Lore also competed in that Jan. 7 race, and was beaten just three-quarters of a length by On Thin Ice despite some traffic trouble in the stretch. Next out, at the same condition on Feb. 11, he rallied up the inside and battled gamely. Although he outfinished Droppin’ Gs, who had a big edge on him in the stretch, longshot Eli swooped the field and got up in the last jump for the victory. Still, it was a determined performance from Legendary Lore, and an effort like that again should result in another solid placing. His trainer, William Morey, has had a great Turfway meet, with 13 wins from 31 starts. He won the Battaglia last year with Hush of a Storm. Morey also sends out Goldeneye (#1), who broke his maiden in gate-to-wire style last out and has an advantageous post position. If he can move forward again in his third career start, he’ll be an upset candidate at 20-1 on the morning line.