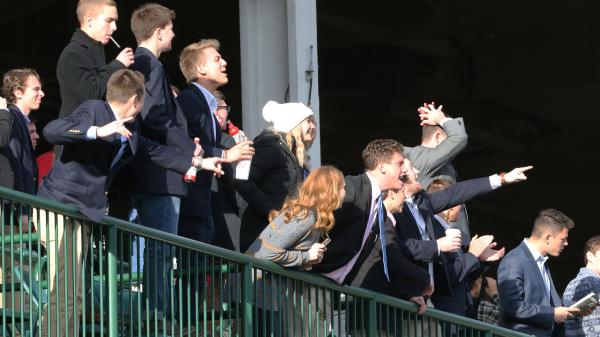 Saturday Nov. 27 is “Stars of Tomorrow” day at Churchill Downs, an entire afternoon of racing designed to showcase up-and-coming 2-year-old Thoroughbreds with the potential to become, well, the stars of tomorrow.

One of the feature races is the $400,000, Grade 2 Golden Rod Stakes for fillies racing 1 1/16 miles. The historic event is over 100 years old, and participants since 2008 include Kentucky Oaks winners Rachel Alexandra and Monomoy Girl. It’s no wonder why the Golden Rod awards Kentucky Oaks qualification points on a 10-4-2-1 basis to the top four finishers.

Eight fillies have turned out to contest the 2021 Golden Rod, but one ranks above the others from an accomplishments perspective. That one filly is #4 Sandstone, who looks ultra-tough to beat for hot trainer Kenny McPeek.

A daughter of 2007 Kentucky Derby winner Street Sense, Sandstone has been spectacular in her last two starts at Churchill Downs. On Oct. 3, she employed pace-tracking tactics to smash a one-mile maiden race by nine lengths, earning a 90 Brisnet Speed rating while counting fellow Golden Rod entrant #3 Secret Oath among her beaten rivals.

Sandstone was even more impressive in the Oct. 31 Rags to Riches Stakes racing 1 1/16 miles. After carving out the pace, the dark bay filly turned back a challenge from 3-5 favorite #6 Yuugiri to power clear and win by 10 ¾ lengths with a 95 Brisnet Speed rating.

As the only proven stakes winner in the Golden Rod field, Sandstone has a class edge over her rivals. She’s also the only entrant to have posted multiple 90+ Brisnet Speed ratings. Sandstone figures to sit a perfect trip stalking #1 Famed through the early stages of the Golden Rod, and if she brings her A-game, I’m expecting another victory.

The question is, which runners should be included in exotic wagers like the exacta and trifecta? Famed is certainly a candidate. A half-sister to 2020 champion 2-year-old male Essential Quality, Famed finished second in her debut at Churchill Downs but came back to dominate a maiden sprint at Keeneland. After battling for the lead through fast fractions over a sloppy track, Famed raced away to win easily by 7 ¾ lengths.

With Brisnet Speed ratings of 87 and 85 under her belt, Famed isn’t quite as fast as Sandstone. But she figures to set the pace while breaking from the rail, and trainer Brad Cox wins at a lofty 34% rate with horses running a route distance (one mile or farther) after contesting back-to-back sprints. Throw in jockey Florent Geroux (a 24% winner when teaming up with Cox), and there’s a lot to like about Famed.

But don’t sleep on the chances of Yuugiri. True, she was no match for Sandstone in the Rags to Riches, finishing 10 ¾ lengths behind. But this is a little deceiving, because Yuugiri pulled 15 ¼ lengths clear of the rest and was allowed to ease up once it became clear she wasn’t going to beat Sandstone. If Yuugiri had been driven to the finish line, she might have finished a bit closer.

Yuugiri had previously dominated a maiden sprint at Churchill Downs by 7 ¼ lengths, earning a 95 Brisnet Speed rating. The daughter of 2011 Preakness Stakes winner Shackleford brings a reasonably stout pedigree to the table and will add blinkers for her graded stakes debut, setting the stage for another competitive performance. Keep in mind, she’s been training strongly for the Golden Rod, most notably working a rapid half mile in 46.80 seconds at Keeneland.

The above-mentioned Secret Oath and the recent grass maiden winner #5 Hal’s Dream are other logical contenders for the minor awards, along with #7 Dream Lith, who exits respectable fifth-place finishes in the Spinaway Stakes and Darley Alcibiades Stakes.

So how should we bet the Golden Rod? We’ll start by keying Sandstone on top of all our tickets. Then we’ll emphasize Famed and Yuugiri in equal strength underneath while adding Secret Oath, Hal’s Dream, and Dream Lith to the bottom of deeper tickets.

Depending on your budget, here are two Golden Rod betting strategies to consider: