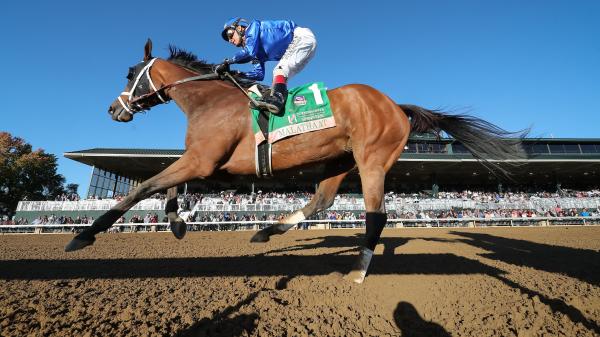 Malathaat, who had won both of her prior starts at Keeneland, did the same in the Spinster with plenty left in reserve, which should help her four weeks later when she figures to be one of the favorites for the $2 million Longines Breeders’ Cup Distaff back at Keeneland on Nov. 5. The 4-year-old Curlin filly finished third by a half-length in the 2021 Longines Distaff at Del Mar, and earned an expenses-paid berth to this year’s renewal by winning the Spinster.

Patiently handled by regular jockey John Velazquez, 0.44-1 post-time favorite Malathaat stalked the pace set by Played Hard and then defending Spinster winner Letruska before taking over in early stretch. Longshot Army Wife made up ground late to finish a clear second, with Played Hard, Letruska, and Princess of Cairo completing the order of finish. Malathaat covered 1 1/8 miles in 1:51.05.

“I was concerned there wasn’t going to be a whole lot of pace,” trainer Todd Pletcher said. “My biggest concern was that Letruska might get loose on the lead, and when she wasn’t, there was at least some entertainment there. I thought that helped, and it looked like (jockey) Johnny (Velazquez) was always very comfortable.

“She seems to love the track here. She’s three for three here now, so that’s always encouraging, to know one handles the surface well.”

Malathaat came into the Spinster off of a half-length win in the Grade 1 Personal Ensign Stakes at Saratoga on Aug. 27. Her win came four hours after another top-class filly trained by Pletcher, Nest, dominated the Grade 2 Beldame Stakes at Belmont at the Big A in her final prep for the Distaff.

Andthewinneris Proves Much the Best in Bourbon Stakes

Earlier on the Sunday Fall Stars card at Keeneland, Andthewinneris clinched a “Win and You’re In” berth to the Nov. 4 Breeders’ Cup Juvenile Turf with a rallying 2 ¾-length score in the $350,000 Castle & Key Bourbon Stakes.

The bay Oscar Performance colt settled near the back of the 12-horse field through the first six furlongs of the 1 1/16-mile race but never more than six lengths back of the early leaders. Jockey Flavien Prat angled his mount out six-wide at the top of the stretch, and Andthewinneris surged into contention with a furlong remaining before drawing clear to win as much the best. He covered the distance in 1:41.27 as the 4.09-1 post-time favorite. Pace-pressing Deer District held off another closer, Really Good, by three-quarters of a length for second.

Andthewinneris gave owner Susan Moulton and trainer Wayne Catalano their second Challenge Series winner over Fall Stars weekend, following Manny Wah’s upset victory Oct. 7 in the Stoll Keenon Ogden Phoenix Stakes. He entered the Bourbon off of a third-place effort in the Grade 3 With Anticipation Stakes Aug. 31 at Saratoga and improved his overall record to two wins from four starts with $282,243 in earnings.

“The way the horse was training, I thought we were going to win the race,” Catalano said. “Obviously, it’s horse racing and anything can happen, but I go in thinking we can win. The horses feel it. Everything went like I planned. Today we had pace and everything came together like it should. When you make a plan and everything comes together, it’s a great time.”–ABR Staff

Private Creed Gets Up Late to Take Indian Summer

In the first Challenge Series race on Sunday, Private Creed churned through the stretch under Joel Rosario to win the $250,000 Indian Summer Stakes Presented by Keeneland Select Listed. The race is a “Win and You’re In” prep for the Breeders’ Cup Juvenile Turf Sprint on Nov. 4.

Sent off as the 2.64-1 second betting choice in a 10-horse field, Private Creed had clear running room at the top of the lane and wore down No Nay Hudson with a sixteenth of a mile remaining before turning back a late challenge from deep closer Mo Stash in the final strides to prevail by three-quarters of a length. The Jimmy Creed colt covered 5 ½ furlongs in 1:02.30.

Steve Asmussen trains Private Creed for owner Mike McCarty. The colt entered the Indian Summer off of a three-quarter length score in the Global Tote Juvenile Sprint Stakes Sept. 8 at Kentucky Downs. Prior to that, he finished third in the Skidmore Stakes at Saratoga in August one race after winning his career debut at Ellis Park.