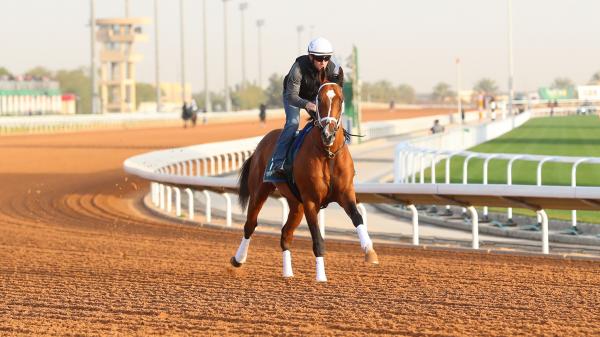 Mandaloun, newly crowned winner of the 2021 Kentucky Derby Presented by Woodford Reserve, will tackle his his next challenge starting from post-position six in the $20 million Saudi Cup Feb. 26 at King Abdulaziz Racetrack.

Mandaloun’s chief American rival, Midnight Bourbon, is inside him in gate three with defending Saudi Cup winner Mishriff in the outside 14 stall.

Art Collector drew post nine and the fourth U.S.-based starter, Country Grammer, with Flavien Prat named to ride, drew the rail in ceremonies Feb. 23. Post positions in the Saudi Cup are not as vital as in some U.S. races at the same 1,800-meter (about 1 1/8 miles) distance as the race is contested around one turn after a long run down the backstretch.

The embattled American runners, Mandaloun and Midnight Bourbon, renew a rivalry that ran through much of the 2021 Triple Crown season and beyond. In the latest iteration, Mandaloun, an Into Mischief colt, came off a six-month layoff to chase down pacesetting Midnight Bourbon and win the Grade 3 Louisiana Stakes by three-quarters of a length Jan. 22 in a virtual match race.

It’s unlikely they’ll have things so much to themselves in Riyadh.

As it did in its first two editions, the Saudi Cup challenge involves, for many, the switch from turf to a dirt track that has drawn rave reviews from trainers and jockeys from jurisdictions from around the world. It also is the seasonal debut for several of the major players.

Reports on the U.S. participants on the morning of the barrier draw were uniformly positive if unremarkable.

Dustin Dugas, assistant to trainer Brad Cox, said Mandaloun didn’t even venture out to the track on Feb. 23, the day after Churchill Downs announced he had been promoted to Derby victory because of the drug positive returned by Medina Spirit.

“Mandaloun just walked this morning, he didn’t go to the track at all,” Dugas said. “We gave him a nice, easy day. He came out of the [Feb. 22] breeze in really good order. He jogged up sound and he ate up everything last night. He had really good energy this morning; he was very happy with himself. We move forward from here.”

Dugas said Cox is expected to be on hand for a final spin around the highly regarded King Abdulaziz dirt two days out from the big race.

One American Saudi Cup contender who did not get the day off was Art Collector, who was out for a three-furlong breeze under Bill Mott’s assistant Neil Poznansky.

“We had a nice breeze this morning,” Poznansky said. “I just wanted to see how he was getting hold of the surface, how he felt doing it, and how his energy was doing it. Everything was good. He’s adapted well to the track. He’s been aggressive.”

Mishriff, who followed his 2021 Saudi victory with wins in the Group 1 Longines Dubai Sheema Classic in Dubai and the Group 1 Juddmonte International Stakes at York, makes his first start for trainer John and Thady Gosden since returning fourth in the Group 1 Qipco Champion Stakes at Ascot last Oct. 16.

The 5-year-old knows the Saudi surface well. His only two previous starts on dirt resulted in a second-place finish in the 2020 Samba Saudi Derby Cup and last year’s Saudi Cup win.

Thady Gosden said Mishriff and stablemate Harrovian, a contender in the Group 3 Neom Turf Cup Presented by Jahez, are having a straightforward preparation.

“The first day here they were both having a look at things, even though Mishriff has been here twice before,” the younger Gosden said. “But they are both really settled now and the weather is perfect for them, warm with a cool breeze. They are both very relaxed and have settled in well.”