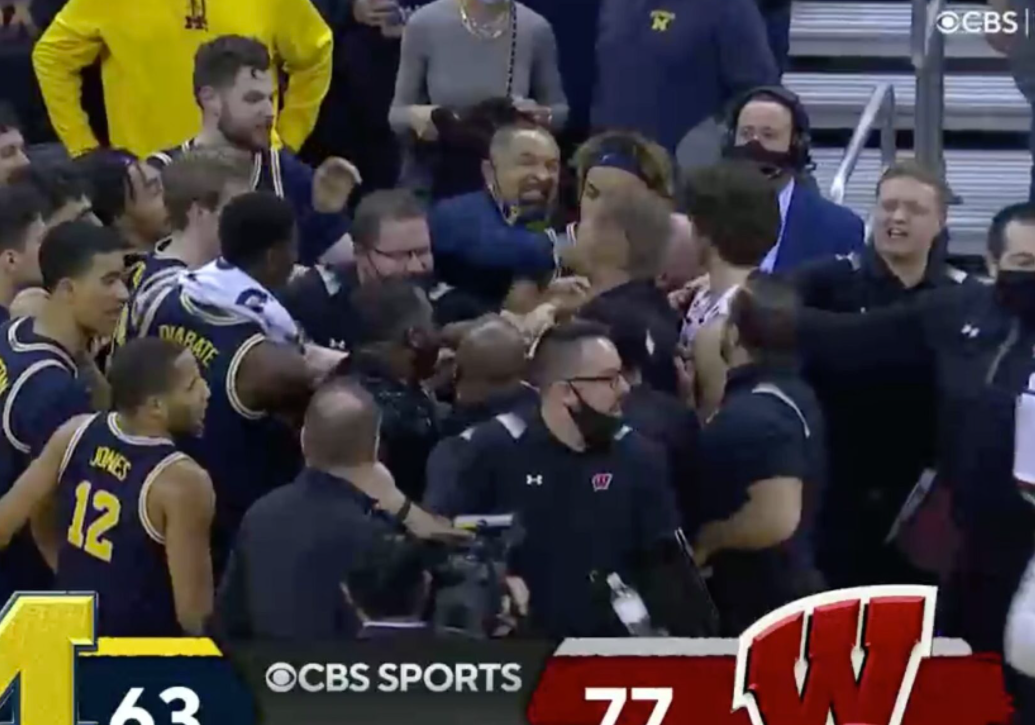 It began with a Wisconsin timeout with 15 seconds remaining in an easy Badger victory. It ended with Michigan head coach Juwan Howard taking a swing at UW assistant coach Joe Krabbenhoft.

Howard was angry about the late timeout and thought Wisconsin should have just let the clock run. In Howard’s words, “I thought it was not necessary at that moment, especially with it being a large lead. I felt that wasn’t fair to our guys.”

Wisconsin head coach Greg Gard says he called the timeout to help his younger players get the ball up the floor and break the Michigan press.

Whatever the case, Howard was not pleased, and as he walked by Gard during the post-game handshake line, he told him as much. Gard grabbed Howard’s arm to stop him, Howard didn’t like that, both sides and benches got heated, Krabbenhoft began yelling at Howard and the punch was thrown.

There were some in the college basketball community who were immediately calling for Howard’s firing. More than likely, because Gard did touch him first, Howard will only face a suspension. However, it could be a lengthy suspension, one that could alter the season for the Wolverines.

Michigan was a No. 1 seed at last year’s NCAA tournament, making the regional final before losing to UCLA. This year, the Wolverines are in grave danger of missing the tournament altogether. Unless they come up with a deep run in the Big Ten Tournament, the best they can hope for is an NIT berth.

Michigan’s next four games are all at home-against Rutgers, Illinois, Michigan State and Iowa- all teams ahead of the Wolverines in the standings, and likely ahead of them in the eyes of the NCAA selection committee.

It is a critical part of the season for Michigan, the worst possible time for their head coach to lose his cool. Michigan is currently listed at +120000 to win based on NCAA championship odds, according to BetUS.

We’re still three weeks away from the NCAA selection committee revealing the names and seeds for this year’s tournament, but they did release their current top 16 teams.

Of note, Gonzaga is the top team in the country. The Bulldogs, along with Auburn, Arizona and Kansas, are in position to get No. 1 seeds.

Auburn is the second-highest ranked of the No. 1 seeds and, according to committee chair Tom Burnett, “Gonzaga and Auburn in the committee room, they’re very close. Razor thin.”

He also said the same thing regarding Auburn and Arizona, meaning there remains plenty of room for movement at the top of the bracket between now and Selection Sunday.

As expected, with Arizona and Kansas being the third- and fourth-ranked top seeds, their draws are not easy. Joining Arizona in the South region is Baylor, Tennessee and Providence, in order of seeding. For Kansas in the East, they get Kentucky, Villanova and Wisconsin.

Only twice in NCAA men’s basketball history has a coach taken a team to the NCAA Tournament as a No. 1 seed in his first season on the bench. If things continue the way they are in Tucson, Arizona Wildcats first-year head coach Tommy Lloyd will be the third.

Arizona has loads of talent to be sure, but they began the season unranked. Even though everyone expected great things from Lloyd after spending 20 years with Mark Few at Gonzaga, he had never been a head coach before. Now, he’s the winningest first-year head coach in Arizona history and a legitimate candidate for national coach of the year.

The only two previous coaches to be a No. 1 seed in their first year were Indiana State’s Bill Hodges (think Larry Bird) and Bill Guthridge at North Carolina. Hodges in that first season won 33 games and had that Bird guy on his roster. Guthridge, taking over for Dean Smith, won 34 games, his Tar Heels featuring Vince Carter and Antwan Jamison.

Both Indiana State and North Carolina made it to the Final Four in those first seasons for Hodges and Guthrie, and the sky’s the limit for what we might see out of this Arizona team before it’s over.