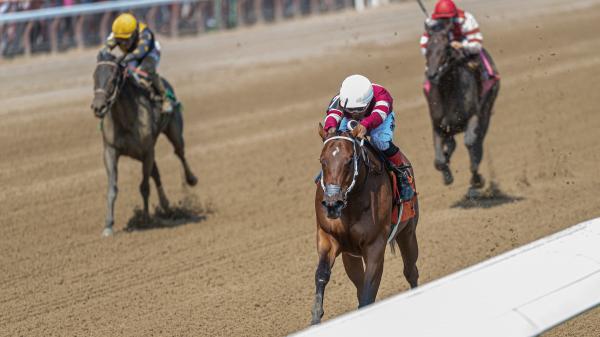 The co-feature of “Future Stars Friday” on Breeders’ Cup weekend is the $2 million NetJets Juvenile Fillies. The country’s top 2-year-old fillies will travel 1 1/16 miles on the dirt main track at Del Mar for the right to be called a Breeders’ Cup champion. The Grade 1 race is scheduled as the seventh race on the card with a listed post time of 6:30 p.m. ET.

The winner of this race is almost always voted champion 2-year-old filly at the year-end Eclipse Awards. Since the race’s inauguration in 1984, the only winners who did not win the Eclipse Award were Ria Antonia in 2013, Cash Run in 1999, My Flag in 1995, and Twilight Ridge in 1985.

The conversation about this year’s Juvenile Fillies runs through #6 Echo Zulu (4-5), who looms as the overwhelming favorite. She’s won all three of her starts impressively, prevailing in each race by at least four lengths. She’s already a two-time Grade 1 winner, having taken the Spinaway Stakes at Saratoga and the Frizette Stakes at Belmont Park. Her presence is so imposing that only five other fillies entered the race.

Echo Zulu was ridden by Ricardo Santana Jr. in her first three starts. However, Santana, who is in the midst of a major riding slump, was taken off of Echo Zulu on Monday morning. Joel Rosario, who has won two of the last three editions of this race, takes the mount for trainer Steve Asmussen.

Given Echo Zulu’s dominance and very likely low price, there’s not much value in betting her to win. The key to making money is trying to figure out who will come in second and playing them under Echo Zulu in an exacta.

In my eyes, the most likely runner-up is #2 Hidden Connection (5-2) for trainer Bret Calhoun and jockey Reylu Gutierrez. She crushed the field in the Pocahontas Stakes at Churchill Downs last out, winning by 9 ¼ lengths after rating off the pace on the outside. She’s one of two horses in here to have won at 1 1/16 miles and has some of the best late pace figures in the race. She should race on or near the pace and, even if Echo Zulu runs away and hides, Hidden Connection will be able to outkick the others and finish second.

The Echo Zulu-Hidden Connection exacta will not pay that much, relative to the average exacta. However, given the circumstances, it should be a great value. To provide some perspective: if Echo Zulu wasn’t in the race, and you could get 3-1 or 4-1 on Hidden Connection in a five-horse field, you’d probably think that was a great price. That’s essentially what this bet is.

Wagering Strategy on a $25 Budget