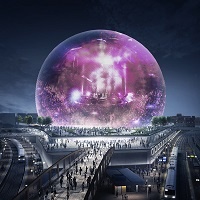 This week’s gambling news looks at when we can expect the MSG Sphere Las Vegas to open, and who will headline the opening act! Also, tickets for the Las Vegas Grand Prix are on sale now… and they’re not cheap! Plus, updates on renovation work at New York-New York and Circus Circus resorts.

Hello friends, and welcome to This Week in Gambling, where it’s time for an update on what’s happening in Las Vegas right now, including some new information on the MSG Sphere! And that is this week’s big story. Over the past several weeks we’ve given you updates on what’s happening in Sin City, including the launch of the new Horseshoe Las Vegas, and the sale of the Mirage Casino. But inquiring minds want to know: when will that MSG Sphere actually open?

I wish I could tell you. I really, really do. But not even the folks building the Sphere know for sure when it will be open to the public. Their best guess is that it should be open sometime in the latter half of this year… so we’ve narrowed it down to a three to four month window. What I can tell you is that when the venue finally does open, the very first act to ever appear on stage will be the legendary rock group U2! That much has been confirmed. Now, U2 has made billions of dollars over the years touring and performing concerts. And that’s a lot of money they’ve made… in the Name of Love.

If you’d like more information on the MSG Sphere we made a video a few months ago that has all the technical details you would want to ask. You can find that video by following that link up there, or the link we’ve left for you in the descriptive area of this video. Now, another event coming to Sin City in the latter half of this year will be the Las Vegas Grand Prix. Scheduled for November 16th through the 18th, Formula One cars will speed down Las Vegas Boulevard at over 200 miles an hour! And now we know where you can watch the race, and how much it’s going to cost you!

The grandstands will be located on East Harmon near the MGM Grand, and at the Bellagio in front of the fountains. Ticket packages start at just under three thousand dollars per person… and that doesn’t include the resort fees they’ll tag on. So if I want to go, I’m going to have to sell an arm, a leg, and every fluid my body can produce. To be fair, that price does include three days at a really nice hotel, staying in a really nice room. Plus you get to see the race all three days… and while you’re at the race, all your grandstand concessions are free. But before you get too excited, that all you can eat special does not include alcoholic beverages. Otherwise, I would go and bankrupt the town!

This week we have a brand new slot machine review to share with you for the Big Shake Neon, an 80’s themed, coin pusher style game from our friends at Eclipse Gaming. Along with traditional slot play Big Shake Neon incorporate a coin pusher into the fun, plus a wheel bonus feature and a skill game element! Check out our full review for Big Shake Neon when you visit and  subscribe to our YouTube channel!

And finally this week, the Circus Circus Casino and Hotel is working on a $30 million  room renovation package right now, with the hope being they will go from a one-star Vegas resort to a two-star Vegas Resort… maybe even two and a half. Also, the New York New York casino is undergoing a $60 million renovation, all in an attempt to make the resort look and feel more like the real New York City. To that end they’ve already added pigeons to the lobby, and are piping in the smell of garbage. They hope to be able to add a rat to every room, if they can get them shipped over from the Circus Circus renovation. So it should all work out.

If you would like more information on the MSG Sphere, you can check out our last Las Vegas Update.