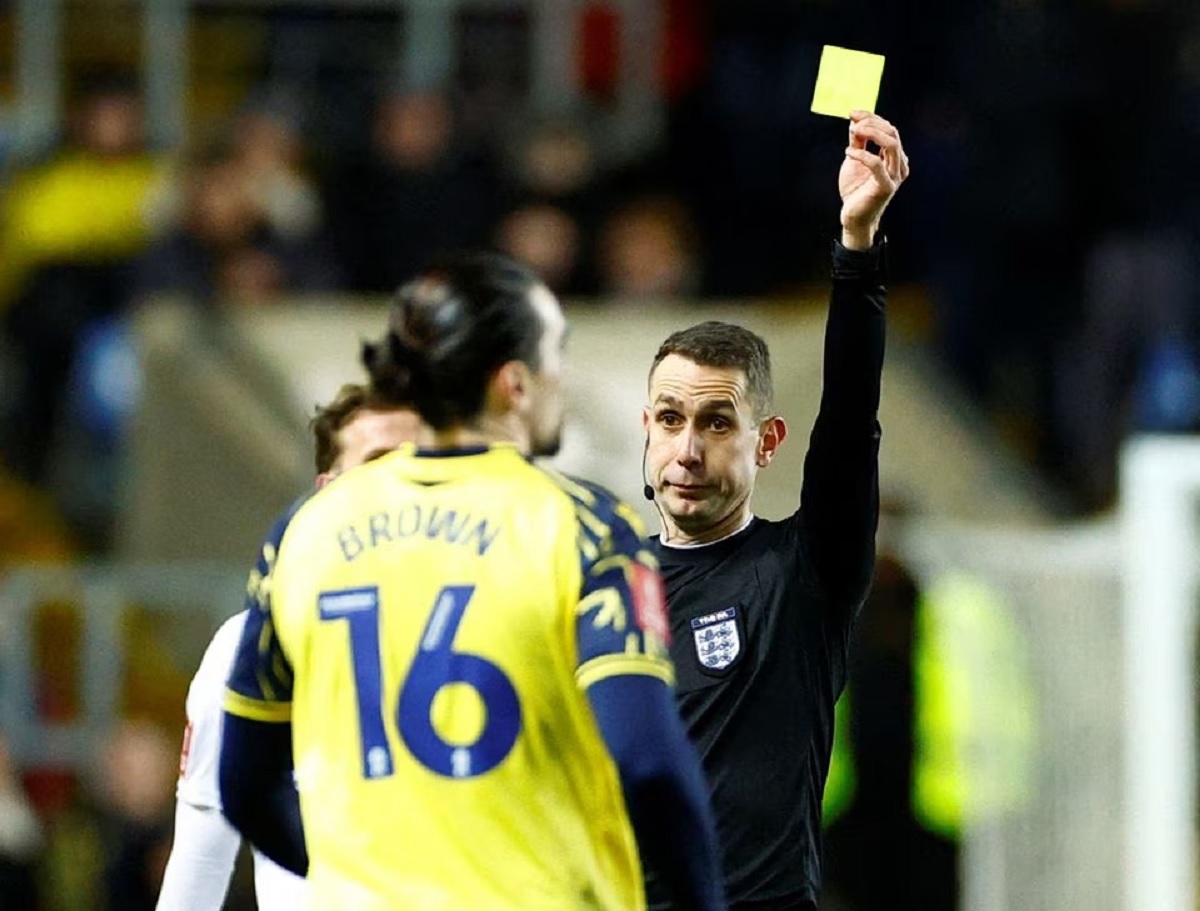 Oxford defender Ciaron Brown receives a yellow card, above, for a foul on Eddie Nketiah. But why did so many people have money riding on that eventuality? (Image: Reuters)

Specifically, the probe is focused on a yellow card that was picked up by Oxford defender Ciaron Brown, 24, in the 59th minute of the game, which Arsenal won 3-0.

This suggests an unusual amount of money was placed on Brown picking up a booking. The governing body will be looking for evidence of “spot-fixing.”

“Spot betting” describes speculation on the minutiae of a game, rather than the outright result — the number of cards or corners, for example. Some say this encourages corruption, or spot-fixing, because it makes it easier for individual athletes to manipulate small aspects of a game in a way that could fly under the radar.

Spot-fixing in elite soccer is extremely rare, largely because stratospheric wages remove financial incentive. In the Premier League, the average salary is more than $3 million a year.

But the FA Cup Third Round is one of those rare occasions when lower league clubs get to play with the big boys. Oxford United plays in League One, in the third tier of English soccer.

Brown was a squad player for Cardiff City, before signing for Oxford in the summer. He has also played for the Northern Ireland international team.

The Daily Mail, which broke the story, claims to have compiled a “dossier of evidence” on the matter. The existence of the FA investigation was later confirmed by trustworthy news sources, including the BBC and Reuters.

The DM says its information includes “alleged phone messages” sent prior to the match that claim, “Brown would be booked in a betting scam.”

“One message is understood to show a betting slip with around £200 staked on Brown being yellow-carded at odds of 8-1,” the DM reported. The word “understood” suggests the British tabloid has not seen the documents in its “dossier” first-hand.

Nevertheless, prior to Brown’s yellow card for a foul on Eddie Nketiah, there were some moments when he was charging around like a man on a mission to get booked.

In the 25th minute, he deliberately tried to pull back the shirt of Arsenal’s Bukayo Saka as winger sprinted past him, notes the DM. He also appeared to elbow right-back Takehiro Tomiyasu during an aerial challenge for the ball.

The evidence is purely circumstantial, and the investigation will be focused on the betting markets rather than the player’s behavior on the pitch, which was not overtly suspicious.

Oxford needed aggression, especially from their center-backs, if they were to stand a chance against the EPL leaders, a team 58 spots above them in the pecking order.

Oxford United said in a statement Wednesday that it was cooperating with the investigation.