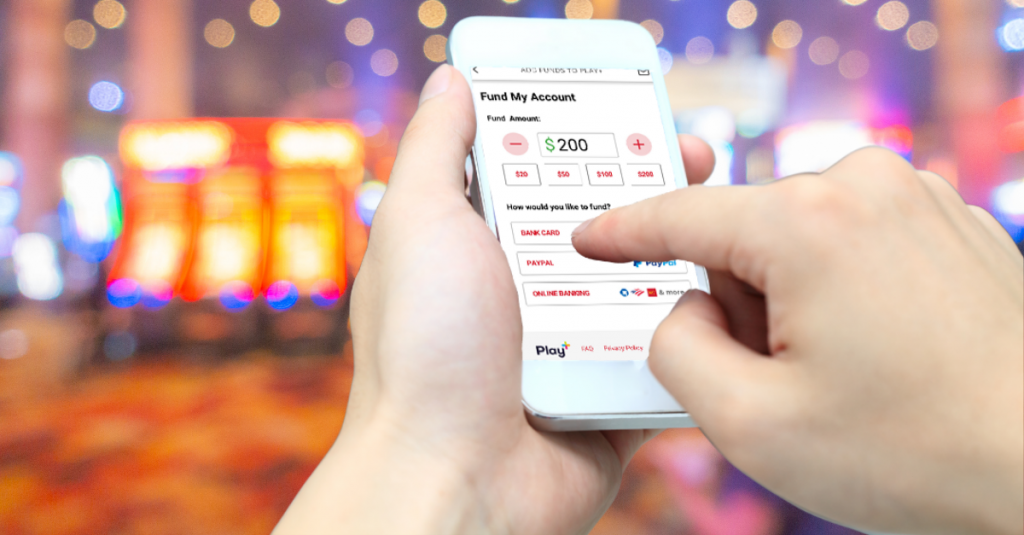 Nevada regulations regarding cashless gaming and other technical solutions may be changing. That’s thanks to a proposal by Sightline Payments that was the focus of a Nevada Gaming Control Board (NGCB) work session earlier this week.

A simulation of Sightline’s Play+ cashless gaming solution. On Thursday, company officials discussed a proposed amendment to the Nevada Gaming Commission regulations that would allow users of the cashless app to verify their identity online. (Image: Sightline)

Currently, Nevada regulations require anyone who wants to bet using a wagering account to go to the establishment tied to the account. Once there, they would present valid, government-issued identification to an employee. Sightline’s petition would allow account holders to verify their identities online through “digital knowledge-based authentication tools.”

Sightline company executives said that would take a burdensome, time-consuming regulation off a solution they operate for casino partners Boyd Gaming and Resorts World Las Vegas.

The company first submitted the proposed regulation in September 2020. It was refiled this year to include language that addresses the scope of the proposal. Sightline Chief Legal Officer Jennifer Carleton told board members that the changes make clear that the changes would not apply to interactive wagering accounts, like mobile sports betting apps.

NGCB staff members have also poured over it and offered some recommendations.

The board did agree to schedule a hearing on the proposed amendment at an upcoming NGCB meeting. That’s when the members could take action, including whether to recommend it to the Gaming Commission.

When Resorts World Las Vegas held its grand opening, the $4.3 billion casino made headlines as being the first major Strip attraction to open in a decade. What also generated buzz was the casino’s commitment to technological innovations. One, in particular, was the casino being the first to allow gamblers and other visitors to go cashless by utilizing Sightline’s Play+ mobile solution.

Sightline co-CEO Joe Pappano told NGCB members there was “one slight wrinkle” for customers to get and use the cashless gaming app.

Customers would sign up for a loyalty account at a Resorts World kiosk,” Pappano said. “That loyal loyalty account could be loaded onto a player’s phone through the Resorts World app. The player could also enable the account wagering through the same app, but the player cannot verify his or her identity under the existing regs that exist today. A casino employee must personally verify the identity of the patron before they could fund a gaming account.”

As fellow Co-CEO Omer Sattar explained later, the registration process is only supposed to take minutes to complete. However, because of the large crowds Resorts World has drawn in the five months since it opened, the lines for new users can have up to “hundreds of people” waiting to enroll.

The best times Resorts World has reported have been around six minutes. But delays of up to two hours are not uncommon Sattar said. Guests have needed to complete forms and hand them to a worker, who also has to complete steps.

He added the experience has been similar at Boyd’s Aliante Casino in North Las Vegas, although the actual delays have been shorter. That casino has not had to handle a rush like Resorts World on the Strip has experienced.

Sightline and other companies in cashless gaming and payments services have worked together, Sattar explained, to find a more efficient workflow that still ensures people are properly vetted and also gets them on the floor or in a bar or restaurant quicker. The industry believes the expectation should be three minutes.

Sattar, though, did not sound like he was second-guessing anything regarding the Resorts World launch. He said it’s been successful. But he was willing to show NGCB members video footage of its guests waiting in long lines to go cashless.

“We thank them for taking the leap and being the first in the marketplace for launching this product set, and for moving the industry forward as pioneers,” he said. “…Our options, quite honestly, were to launch a product, which we knew was not optimal, or to wait six-to-nine months, and Resorts World, and we believe rightfully so, decided that it is better to launch the product and then continue to enhance it.”

The board did receive some opposition to the proposal. Marc Rubinstein, a gaming lawyer representing Station Casinos, said in a letter Tuesday that the work session should not be held regarding it because the amendments would violate federal Financial Crimes Enforcement Network (FinCEN) regulations.

Rubinstein said casinos must document how they verify customers who come on their floor to bet. Because of that, he believes the casinos across the state would be in potential violation if they were to follow the new regs.

In response, Sightline provided a letter from a Washington, DC law firm that has represented the company for more than a decade. The letter noted guidance from federal officials for casinos that they can take advantage of “non-documentary procedures” to confirm identities.