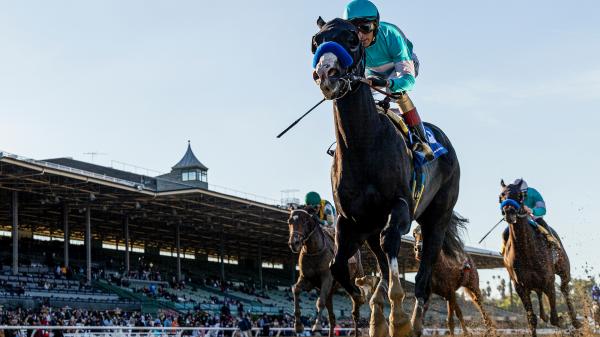 His 3-year-olds may not be eligible to run in the Kentucky Derby Presented by Woodford Reserve, but nevertheless trainer Bob Baffert surely has an abundance of horses with the potential to be Triple Crown contenders in any other year.

While the Hall of Fame trainer is in the midst of a two-year ban preventing him from racing at Churchill Downs that was handed down after 2021 Kentucky Derby winner Medina Spirit failed two post-race drug tests, his barn includes Speedway Stables’ likely 2-year-old champion and TVG Breeders’ Cup Juvenile Presented by Thoroughbred Aftercare Alliance winner Corniche.

He added the winner and runner-up in another Road to the Kentucky Derby qualifier Jan. 1 when Baffert stablemates Newgrange and Rockefeller ran 1-2 in the $100,000, Grade 3 Sham Stakes at Santa Anita Park, giving Baffert his eighth victory in the mile stakes.

Owned by a large partnership of Golconda Stable, Madaket Stables, SF Racing, Siena Farm, Starlight Racing, Stonestreet Stables, Waves Edge Capital, Catherine Donovan, Robert Masterson, and Jay Schoenfarber, Newgrange, a son of Violence, made all of his owners – and then some – quite happy with a front-running score by a decisive 2 ¾-length margin over much of that same conglomerate’s Grade 3-winning Rockefeller.

It was just the second start for Newgrange, coming after a 1 ½-length win in a six-furlong Nov. 28 maiden race at Santa Anita.

“He ran great and has done nothing wrong so far,” said Sol Kumin, who heads the Madaket Stables group. “It was a great ride by (jockey John Velazquez), who slowed the pace down. Bob said this week that he really liked this horse and he’s so good at getting his horses ready. He doesn’t push them. He’s patient.”

Though 17 Kentucky Derby points were up for grabs in the Sham, only three were awarded since Baffert-trained horses are ineligible to receive them. With the Kentucky Horse Racing Commission yet to make a final ruling eight months after the horses crossed the finish line in the Run for the Roses, Kumin said the Newgrange and Rockefeller owners are taking a wait-and-see approach.

“We’ve been supportive of Bob and our plan is to stay supportive. We haven’t really discussed anything we’re doing going forward,” Kumin said. “If you don’t win a big prep right before the Kentucky Derby, you’re probably not winning the Kentucky Derby, so we have a lot of time to decide and see what happens. The Derby is, of course, an important race, but it’s just one race. There’s a lot of other great races to consider.”

The only drama in the Sham was the close battle for second as Newgrange, the 2.70-1 third betting choice, led from the start, while only modestly pressured by Rockefeller through fractions of :48.94 and 1:12.84. Ahead by 1 ½ lengths over his stablemate after six furlongs, Newgrange extended to a 2 ½-length lead in mid-stretch and was never threatened while completing the mile in 1:38.32.

“He looked good,” Baffert said. “He had been training really well and working together with Rockefeller. The quality is there. I’m happy we have a great team and we are moving forward with him. I thought Rockefeller would be a little closer. We’ll have to figure things out on where the two go from here.”

Behind the winner, Rockefeller held on for second by a nose over Oviatt Class, who picked up two Kentucky Derby points and now has four.

Mackinnon, keen behind the slow pace while along the inside early, was an even-paced fourth and picked up one qualifying point.

The win was the ninth for John Velazquez since the Santa Anita meet began Dec. 26.

“It’s a great blessing. To come here for the first time in winter and get the opportunity and good horses I’ve gotten to ride is really good,” said the 50-year-old Hall of Famer, who in years past was based in Florida during the winter months. “I feel young.”